What is Riyadh's endgame in Lebanon?

In an effort to condemn Iran, Saudi Arabia is setting its sights on Hezbollah and Lebanon. 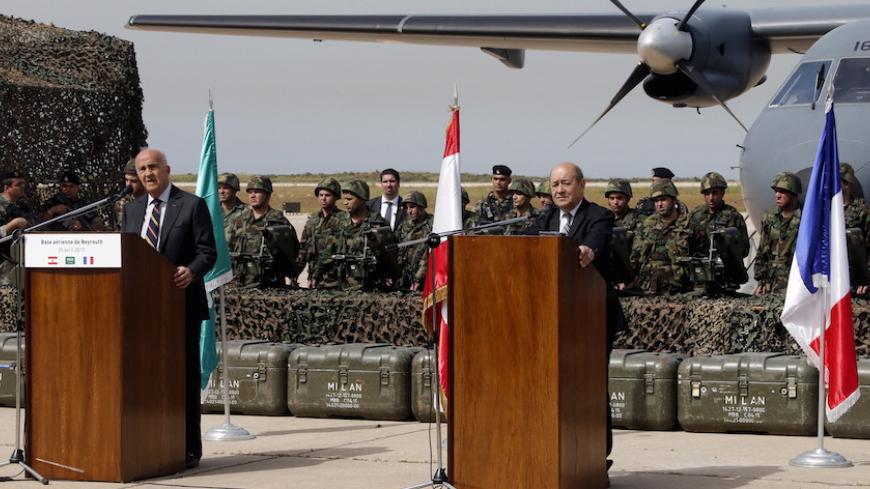 Lebanese Deputy Prime Minister and Defense Minister Samir Moqbel (L) speaks during a joint news conference with French Defense Minister Jean-Yves Le Drian at the Beirut airport air base during a ceremony to give weapons to the Lebanese army as part of a Saudi-funded deal worth $3 billion, April 20, 2015. - REUTERS/Mohamed Azakir

Saudi Arabia is playing a high-stakes game in Lebanon, seeking to punish and weaken Hezbollah and Iran. It's not clear if the Saudis have an achievable end goal in mind.

Lebanon did not join an Arab League consensus in condemning Iran for the attack on the Saudi Embassy in Tehran in early January. In response, Riyadh suspended indefinitely a $3 billion program to purchase French weapons for the Lebanese military and canceled a $1 billion project to assist the Lebanese internal security service. Then it announced a travel warning discouraging tourists and others from visiting Lebanon. Several Hezbollah-connected companies have been blacklisted by Riyadh.

The Saudis’ Gulf allies quickly followed suit and issued travel bans. Saudi and Emirati banks are said to be leaving Beirut. Next, the kingdom and its allies may start sending Lebanese expatriate workers home — something that would be a major hit to Lebanon's economy given that half a million Lebanese citizens work in the Gulf.

The Saudi-Iranian rivalry in Lebanon is decades old. This current round got started last summer when Saudi spies captured Ahmed Ibrahim al-Mughassil at the Beirut airport, arriving from Tehran. Mughassil is a Saudi Shiite who has worked with Iranian intelligence for a quarter century. He was the mastermind of the deadly 1996 attack on a US Air Force barracks in Khobar, Saudi Arabia, that killed 19 Americans. Snatching Mughassil out of Lebanon was an embarrassment for Hezbollah and Iran. His subsequent debriefing probably also dealt a blow to their covert apparatus in the Gulf states.

The Russian and Iranian intervention in Syria this past fall also increased Saudi anger at Hezbollah, which provides many of the boots on the ground to attack the Sunni opposition to Syrian President Bashar al-Assad. Riyadh's goal in Syria is to get rid of the Iranian hand there, and Hezbollah is the center of the Iranian hand. So frustration with Beirut grew steadily in the kingdom this fall as a consequence of frustration with events in Syria.

Some of the Saudi moves are more symbolic than damaging. The Lebanese army was unprepared to effectively absorb the promised French arms, and the French arms industry will probably be hurt more than Lebanon by the deal's suspension. Halting tourists and cutting remittances are serious actions, however, and will damage the fragile Lebanese economy.

Saudi Arabia's allies in Lebanon, the March 14 movement, have urged Riyadh to reconsider the aid suspension and have apologized for the government's failure to condemn Iran. The Hezbollah-dominated March 8 group has defended Iran and urged tilting toward Iran in the regional balance. But even the Saudi's friends caution that Hezbollah is too powerful in Lebanon to be challenged directly.

Since the accession of King Salman bin Abdul-Aziz Al Saud last year, Saudi national security policy has become much more aggressive and risk-prone than it was under his predecessor, King Abdullah. The war in Yemen, also intended to weaken and humiliate a pro-Iranian militia, is the best example of Riyadh's new assertiveness. It's also an excellent example for the proposition that it's easy to start a war and hard to end one.

Hezbollah has longstanding ties to the Houthi rebels in Yemen and has provided advisers to their forces. The Houthis are not Iranian proxies, however, and retain far more independence from Tehran than Hezbollah. For its part, Hezbollah is now calling for the Lebanese government to accept Iranian aid to fill the gap left by the Saudis.

Evicting Iran from Lebanon is a bridge too far for Saudi diplomacy. So is defeating Hezbollah, as Israel has proven more than once. Lebanon is a fragile political entity. Its civil war in the 1980s was the role model for Syria today: Extreme sectarian violence begat foreign intervention on a massive scale. A quarter million Lebanese died between 1976 and 1990.

Saudi Arabia is right to make Iran and its proxy pay for their acts of terrorism and for failing to protect embassies and diplomats. Iran has yet to demonstrate it respects diplomatic immunity, a cornerstone of global order. But Riyadh needs to have a realistic goal in mind. The Middle East does not need yet another broken state.