Iranian President Hassan Rouhani awarded medals to members of his Cabinet and the nuclear negotiation team. 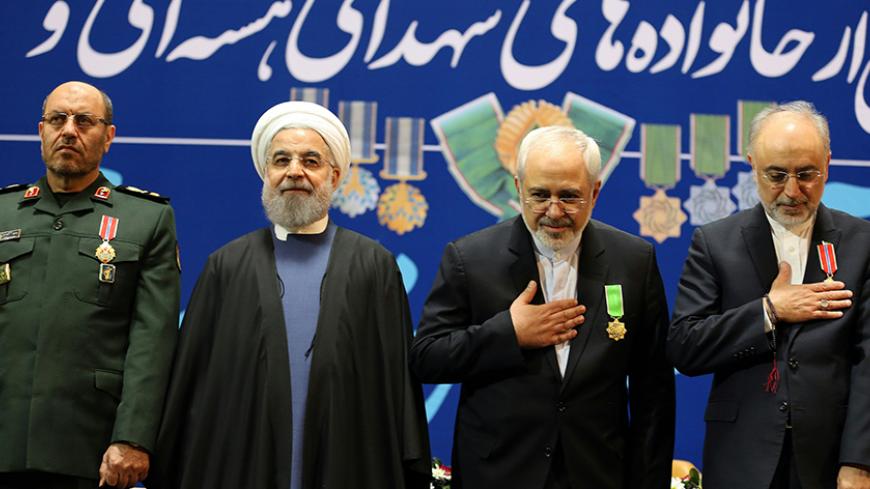 On Jan 31, Iran’s Supreme Leader Ayatollah Ali Khamenei awarded medals to sailors of the Islamic Revolutionary Guard Corps who had captured US sailors after they entered Iranian waters in the Persian Gulf, an incident that had the potential to become an international crisis. Just over a week later, at a Feb. 8 ceremony, President Hassan Rouhani awarded medals to members of his Cabinet and Iran’s negotiation team for the final nuclear deal, a process that ended an international crisis.

At the ceremony, Rouhani said that the nuclear negotiations, which took a special urgency once he took office in 2013 and appointed his Foreign Minister Mohammad Javad Zarif to head them, were as “difficult and fateful” as some of the largest battles during the Iran-Iraq War of the 1980s. Rouhani said that he and the negotiation team were in constant communication the day of the final talks in Geneva and until 5 a.m. the next morning.

On the makeup of the negotiating team, Rouhani said that after Zarif took over and the talks progressed, there was a need to assemble a new team. Therefore, Ali Akbar Salehi, the head of the Atomic Energy Organization of Iran (AEOI) joined because of his technical expertise. Later in the talks, Minister of Defense Hossein Dehghan was consulted to address “[Israeli] accusations” and the issue of possible military dimensions of Iran's nuclear program. Rouhani also thanked his chief of staff, Mohammad Nahavandian, an economist, for helping on the sanctions-related issues of the nuclear deal.

Other negotiators to receive awards were Deputy Foreign Ministers Seyed Abbas Araghchi, Majid Takht-Ravanchi and Hamid Baeidinejad. A number of AEOI officials and officials responsible for the implementation of the nuclear deal were also given awards.

Rouhani also addressed the families of assassinated nuclear scientists who were in attendance, saying, “The martyrs of peaceful nuclear technology wisely, consciously and bravely chose this dangerous path and when they realized continuing their path would be dangerous they did not retreat one bit.” He added, “Even if we would have given tens of martyrs in this path, without a doubt our nuclear scientists would not have left the path of the people and dignity and pride.” At least five Iranian scientists were assassinated. Though no one has claimed responsibility for this, Israeli officials have hinted at those who they believe are responsible.

Rouhani, who hopes to fill the future parliament with like-minded allies after the Feb. 26 elections, said that the nuclear deal and the lifting of sanctions “is not the honor of one faction, party, administration or specific individual, but the great nation of Iran.”

While Reformist media covered the ceremony in a positive light, other media were critical of the event. Raja News, associated with the hard-line Endurance Front, wrote that contrary to the advertisements of the administration, the Iranian people no longer associate the nuclear deal with the opening of the economy. Raja accused the Rouhani administration of holding the medal ceremony for the nuclear deal because “the administration has had no achievements in the field of economy or any other domestic arena.” The article continued that if people genuinely saw the nuclear deal as a great achievement and victory, there would be no need to hold such an award ceremony or make comparisons to major war battles of the 1980s.