Why some Israeli high schools stopped trips to Poland

Some of Israel's high schools have decided to end student trips to the concentration camps in Poland, preferring other educational frameworks to deal with the issue of the Holocaust. 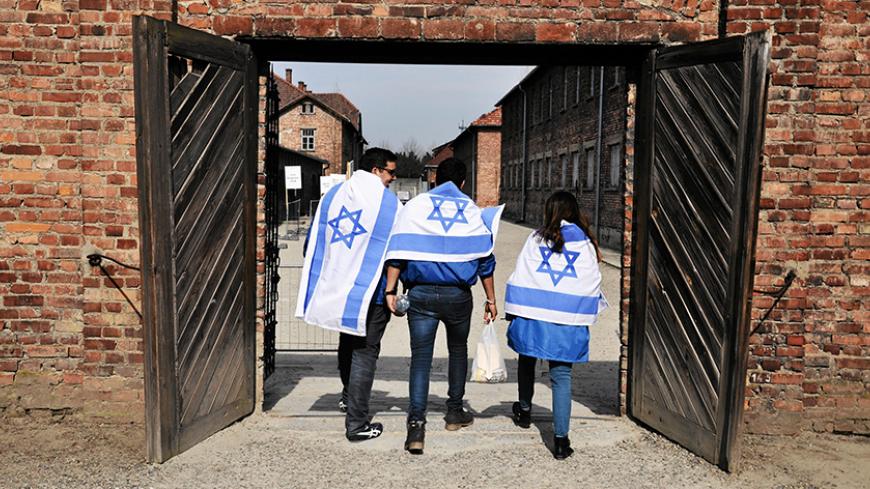 People with Israeli flags around their shoulders walk in the former Nazi death camp of Auschwitz in Oswiecim, Poland, April 16, 2015. - REUTERS/Lukasz Krajewski

In 2014, when Shira Chait was a 10th grader at the Israel Arts and Science Academy in Jerusalem, she tried to lead a revolution and restart the tradition of student trips to Poland that ended at her school six years earlier.

Since the 1980s, most Israeli high schools have been sending thousands of students ages 16-18 to Poland. During these one-week trips, the students learn about the Holocaust of the European Jews. They tour ghettos, visit Jewish museums and concentration camps and wave Israeli flags in a show of Jewish victory over the Nazi extermination machine.

Etay Benovich, the principal of Shira's school, doubts the usefulness of these missions. “When I participated in a program at Yad Vashem [Israel's Holocaust Museum] to prepare for the trip, I felt that going on the mission, as it is today, is something everyone does because you have to, because everyone does it, without stopping and thinking,” he told Al-Monitor.

Benovich said that the decision to stop sending students to Poland wasn't an easy one. “Students — aside from some protests here and there — actually understood. Parents were the ones who opposed the decision. But as time goes on, the responses have become more positive.” Instead of trips to Poland, Benovich now organizes trips for his students in Israel around the topic of the Holocaust.

The school trips to Poland have made the Israeli news in recent weeks. Their high cost — 6,000 Israeli shekels per student ($1,536) — has made the trip possible only for students from well-off families. In light of this situation, Education Minister Naftali Bennett announced in December that the price of the trips would be lowered to 4,500-5,000 shekels per student ($1,150-$1,280). At the same time, suspicions grew that travel agencies won contracts from the Education Ministry and operated a cartel to control and inflate prices. The media attention led to a public debate on the “commercialization of the Holocaust.” According to Benovich, part of his unease with the trips to Poland arises from his unwillingness to “cooperate with a fraudulent industry.”

Criticism of the trips to Poland extends beyond the financial issue. Some argue that they have become a tool for nationalist propaganda and that public photos of youths in Auschwitz wrapped in Israeli flags and loudly singing political anthems cause discomfort. In an interview with the Israeli Walla website, Benovich argued that “you won’t see students with Israeli flags marching down the streets shouting chants like at a soccer match” at his school.

"Even when we sent a mission to Poland it was not connected to a national agenda, but based on universal values," he said. “The need to create an alternative led us to organize a mission in Israel, whose main theme is looking at processes that took and take place in Israeli society and handling the complicated question of the Holocaust.” According to Benovich, the questions that come up in the trips touch on Israel’s treatment of refugees, the status of the Holocaust in the Israeli-Palestinian conflict, the treatment of Holocaust survivors and other complex and key issues for Israeli society.

Chait, now in the 12th grade, doesn't accept these arguments. “I grew up in the United States,” she told Al-Monitor. “I always felt that this trip is very important. When I learned that my school does not organize these trips, it was a serious disappointment. My family members were killed in the Holocaust and it was important to me to visit [Poland]. The trip in Israel is important, but it doesn’t replace visiting Poland. It’s a missed opportunity.”

Shahar Uphaz, a 12th grader at the Herzliya Gymnasium in Tel Aviv who went to Poland last year, has some reservations. “I’m not certain to what extent the trip was necessary. You can hear and see things in Israel, too. The trips have become an oiled machine meant to play on your emotions and let you check that box. The Holocaust cannot be made palatable, but perhaps you can talk about it in a less graphic manner. I myself am not so sensitive, but there were situations others couldn’t handle, especially when it came to stories of children and babies who were murdered.”

Uphaz' parents didn't want her to go. “The students were not at the right age to deal with it and the trip is too intense,” her mother Rakefet told Al-Monitor. “Children can fall apart or put up an emotional wall. There are Holocaust survivors still alive, and I told Shahar that visits to a Holocaust survivor once every two weeks — make him some tea and sit and talk with him — would be more educational and make more of a personal impact.”

The principal of the Branco Weiss Anne Frank High School at Kibbutz Sasa, Yigal Cohen, agrees that there are suitable alternatives to the trip to Poland, but he still chooses to send his students. “We are a multicultural school — we have Jewish, Christian, Muslim and Circassian students, new immigrants and students from Hashomer Hatzair [the Labor youth movement], religious and secular students,” he said. "The study of the Holocaust is a way to instill values that we believe in, like humanism and acceptance of the other. The mission to Poland, if we prepare for it properly, is the apex of these insights and their educational value. We hold a ceremony with Polish youths at a death pit where not only Jewish, but also [other] Polish children were killed, and commemorate the genocide of the Circassians. Stepping out of your comfort zone leads to amazing encounters within ourselves and a deep conversation between the groups that make up the school’s population.”

Cohen is convinced that these trips help to create thoughtful and level-headed adults, and that the memory of what the Jewish people went through helps them develop a humanistic and compassionate approach to minorities in Israel — as representatives of the ruling majority. “Students who were inducted into the [Israel Defense Forces] come and talk with us. When a former student tells you that he’s standing at an IDF checkpoint and recalls the experiences he had in school, including the mission to Poland, its importance is clear to me.”