Since ultra-Orthodox schools do not include history classes in their curricula, Israel Goldwasser and his friends came up with the idea of recorded Holocaust-history classes over the phone. 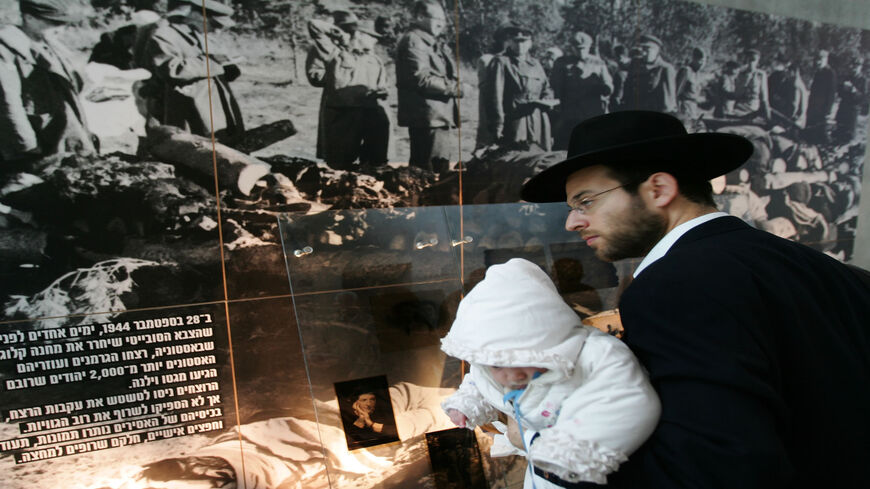 Israeli leaders participated Jan. 27 in a series of events in Israel and abroad commemorating the International Holocaust Remembrance Day. Ultra-Orthodox press reported these events with their own angles, focusing on the Grand Rabbi of Russia praying for the dead at the Jewish Museum in Moscow. Still, for the ultra-Orthodox, these events stayed in the realm of the media, and did not resonate in ultra-Orthodox classrooms.

Perhaps this will sound strange, but while Holocaust studies are integrated into the curricula of diverse Israeli communities, such as the Arab sector, the ultra-Orthodox actually do not learn about the Holocaust in school. Ultra-Orthodox students are not exposed to didactic education on the horrors of World War II. Many of them know little of the terrible trauma faced by the Jewish people.

Ultra-Orthodox do not commemorate the Israel-designated Holocaust Remembrance Day, on the 27th day of Nissan on the Hebrew calendar. They perceive it as a secular invention, so that an average ultra-Orthodox student is not supposed to hear of it. Most shamefully, even the religious Holocaust Remembrance Day commemorated by the Chief Rabbinate on the fast day of the 10th of Hebrew month of Tevet, which was declared “the general Kaddish day,” is not recognized by most ultra-Orthodox because of their long-standing ideological dispute with the state-sanctioned rabbinate.

Add to this that a large segment of private ultra-Orthodox educational institutions do not teach history at all. Even those schools that teach what are called “secular studies” focus on Hebrew, arithmetic and perhaps English, but not history. Thus, the Holocaust is missing from the ultra-Orthodox curricula.

Since ultra-Orthodox children are restricted solely to reading ultra-Orthodox literature, very few children would have read "The Diary of Anne Frank" or "The Island on Bird Street." Even associated literature, such as books on the Eichmann trial, are not known to the ultra-Orthodox child. While children have heard of the Holocaust from their parents and elders — in cases where they have agreed to open up to children — since parents of today’s children are themselves grandchildren of Holocaust survivors (a disappearing generation), we can assume that an ultra-Orthodox child would never by chance meet a person with a number tattooed on their arm, a phenomenon that two decades ago occurred at every synagogue when sleeves were pulled up to wrap tefillin during prayer.

But in the last few years a positive revolution has occurred, which has brought Holocaust education to thousands of children and even adults. While as of now this revolution is not reflected in an organized way in the school system, its impact cannot be ignored.

Behind this initiative are several ultra-Orthodox young people who, despite being in their 30s, have been pained by the absence of the Holocaust from curricula and especially its absence from the consciousness of the ultra-Orthodox community. Following several meetings, they organized a revolutionary learning system, which they called “Remember Them” (after a biblical verse that appears in prayer, “May G-d remember them," which relates to all those killed as martyrs), a telephone system that can be called at any time, where the caller can listen to recorded lessons that teach about the Holocaust in a systematic way.

The system began with a limited number of recorded lessons, and has in a short time become a huge success, which attests to the enormous gap that exists in this area, especially to the thirst for knowledge felt today in all sectors of the ultra-Orthodox community — children and adults, men and women. Tens of thousands of callers have flooded the lines, and new extensions have had to be added, as well as new content, since the organizers have struggled to meet the demand of requests that have come in from across the country and the world.

Today, three years after it was launched, the system includes a huge bank of lessons, through which callers can learn about the whole period, from the German experience between the wars that led to the rise of the Nazi Third Reich and the development of Aryan racial supremacy, to the invasion of Poland, to the implementation of the “Final Solution,” stage by stage. Listeners can hear descriptions from survivors who were held in the camps, as they tell of life in the ghettos and the labor and death camps, the efforts to make it to tomorrow, and descriptions of how they observed the Jewish commandments in the camps.

Although this is a format that requires continuous listening for hundreds of hours, thousands call the system daily, hearing a new lesson almost each day consistently. One can listen while riding the bus, yeshiva students use the time between lessons, but children especially listen to these lessons, mostly before bedtime. They thus acquire comprehensive knowledge of the period and its events, an area that was previously unknown and totally inaccessible to them.

What’s especially surprising is the person whose voice is heard in most of these lessons is a talented and articulate speaker, who can bring to life the topic of the Holocaust for young people. His voice has become the soundtrack identified with the topic of the Holocaust in the ultra-Orthodox sector. Israel Goldwasser is today considered in ultra-Orthodox circles an authority on all things Holocaust. The enormous knowledge he has acquired on the topic, alongside an amazing ability to illustrate the events, has made a topic accessible to tens of thousands of ultra-Orthodox people, young and old.

Alongside the informative lectures, Goldwasser is working on additional means to teach the Holocaust to the masses, foremost of which is virtual trips to the death camps in Poland. Traveling to Poland, touring ghettos and visiting Jewish museums and concentration camps, have become an integral part of the Israeli secular education, for high school students. These trips are often subsidized by the Education Ministry and by other public bodies. But such trips are not organized in ultra-Orthodox schools and yeshivas (though there are private trips organized for adults). Addressing this lacuna, Goldwasser has recently produced a 3D presentation in which he tells the stories of survivors. Thanks to these new multimedia features, students can feel as if they are standing on the ground of the camp, which leads every such lecture to spark an emotional response and leave a powerful impression.

“Unfortunately,” Goldwasser told al-Monitor, “we are losing the generation that had a big presence of Holocaust survivors, and today students whose parents and grandparents grew up at the knees of the survivors are not at all exposed to the topic of the Holocaust.”

He said, “It is unfortunate that while the ultra-Orthodox experienced a most significant loss during the Holocaust, where entire magnificent Hassidic courts were erased, yeshivas destroyed and extended families left nearly without a trace, this community doesn’t teach the topic. If that’s not enough, the self-sacrifice of the victims who managed to maintain their humanity, wrap tefillin, kept the Sabbath and made sure to eat kosher and even study Torah under the cruel Nazi regime, in appalling circumstances as they endangered their lives, do not receive a place of honor in the ultra-Orthodox curriculum.”

For this reason, Goldwasser defines his life goal as a mission to teach the ultra-Orthodox community, especially the young generation, the stories of the Holocaust. “That’s the least we can do for those martyrs, most of whom didn’t even leave behind anyone to say Kaddish for them. Today, we must do all we can so their last wish — ‘Jews, do not forget’ — will be honored.”