How Palestine plans to shift its media strategy

In an interview with Al-Monitor, the newly appointed director of strategic communications in the Palestinian prime minister’s office, Jamal Dajani, promises to prioritize the Palestinian constituency and be accessible to the press. 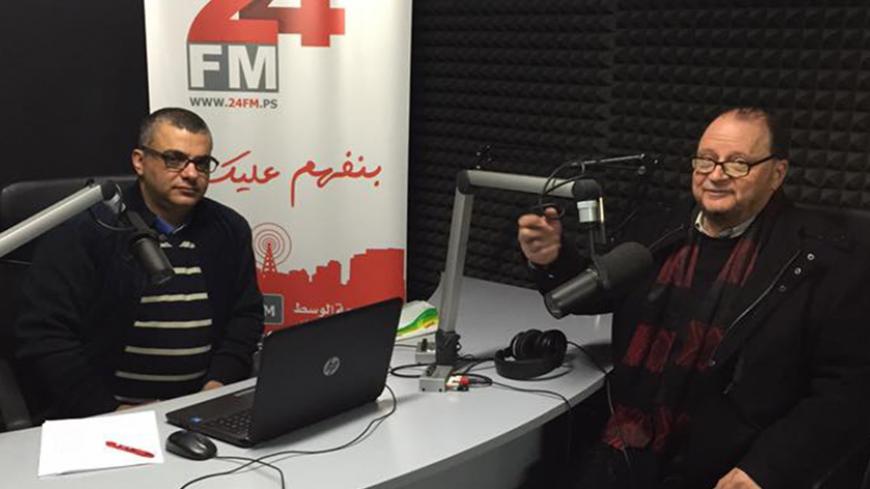 You would expect the holder of the title “director of strategic communications and English-language spokesman” to talk about how to woo The New York Times or how to convince the BBC for positive write-ups about Palestine. But while Jamal Dajani — appointed Jan. 26 as new media guru for Palestine's prime minister — is deeply interested in how the Palestinian narrative is reflected internationally, his first priority is working with the local media. For him, the first task in representing a politician is to communicate with the local constituency.

Dajani, a 58-year-old Jerusalemite, is a graduate of Columbia University and has been living in San Francisco. He told Al-Monitor via Skype that he never applied for the job, but feels that it is part of his national duty to serve. After years in the United States and on the road, Dajani is now back in his birthplace.

The new head of Palestinian communications lays out his credentials: “I have never been disconnected from Palestine. The nature of my work as a journalist, radio and TV producer and working in media development has put me in a unique position looking both from outside and the inside.”

The Palestinian-American journalist who won a Peabody Award for producing “MOSAIC: World News from The Middle East,” a TV program that provides original news from the Middle East, is not new to creating and leading communications strategies. He said, “I served as commissioner on human rights in San Francisco. I was also chairman of the Immigrant Rights Commission. In all these positions, the first order of business is to make sure that people know that you are working on their behalf.”

Dajani, who was also vice president for the Middle East and North Africa section at the US-based Internews Network, said that it’s basic communications to reach out to the population you represent, noting, “The job of any government communicator is to reach out and be transparent. You have to give people hope, but not false hope.”

One of the first decisions that Dajani made was to bring Palestinian Prime Minister Rami Hamdallah to local air waves. Choosing Ajiyyal, a leading local radio program anchored by Maysoon Manasrah, Dajani ensured high visibility to the local Palestinian population.

At Ajiyyal, the prime minister answered listeners’ questions compiled by the station’s anchor. The interview scheduled for 30 minutes on the morning of Jan. 31 went on for more than an hour. “The prime minister was very happy answering the questions that he could and promising to reply soon to those he was unable to answer,” Dajani told Al-Monitor.

Along with prioritizing the local population, Dajani said his strategy calls for giving equal attention to the Palestinian diaspora. Parallel to giving priority to local issues, Dajani said the time he spent abroad has added a new angle to his communications strategy: “I am constantly talking to Palestinians in the diaspora. More than half of our population lives abroad — there are a half a million Palestinians in Chile alone. They are future investors and educators.”

The elephant in the room, according to Dajani, is of course the Israeli occupation and its overwhelming effects on every single Palestinian. “We live in unusual circumstances; we are a struggling nation. However, people still have to [live] a daily life. They send their kids to schools, hospitals have to function, potable water must be made available despite the presence of the occupation, and this is part of the resistance that must be made clear to the world.”

In one of his first meetings with the head of a Jerusalem-based international news bureau, Dajani was asked if, as spokesman for the Palestinian government, he will be answering his phone. As a former journalist and media producer, Dajani understands very well what journalists need and has plans to address them despite the fact that he has inherited a seriously ineffective department. “There isn’t a single person in the department that I inherited that could write a simple press release in English,” he said.

While Dajani’s attention is on pitching human interest stories, writing press releases in English and answering phone calls, the new communications director has to watch his back. In the first days of taking over the new position, there was a vicious attack against him. Ibrahim Milhem, the editor of the news site AlQuds, recalled a number of past articles written by Dajani. “They tried to show that I have been against the Palestinian president by taking some of what I have written in the past out of context. I was summarizing what people were saying at certain times, and this was used to try and question my national [legitimacy].”

In response to a question about relations with the Palestinian president, Dajani was very clear. “That is not part of my scope of work; I represent the prime minister. Sure, we need to coordinate with the president’s office, but my priority is to represent the government and not issues of Palestinian policies.”

Dajani is not naive, though, as he said, “This is not a perfect world; there are a lot of challenges to deal with. I don’t have all the answers. I have answers for what I know best, which is how to communicate the message.”

The addition of a proven media professional to the Palestinian Prime Ministry will no doubt make a valuable contribution to the overall Palestinian communications strategy, so long as professionals are able to do their job properly without interference by politicians.