Palestinians are overjoyed by the defeat of Donald Trump in the US election, though officials are so far keeping their reactions subdued. 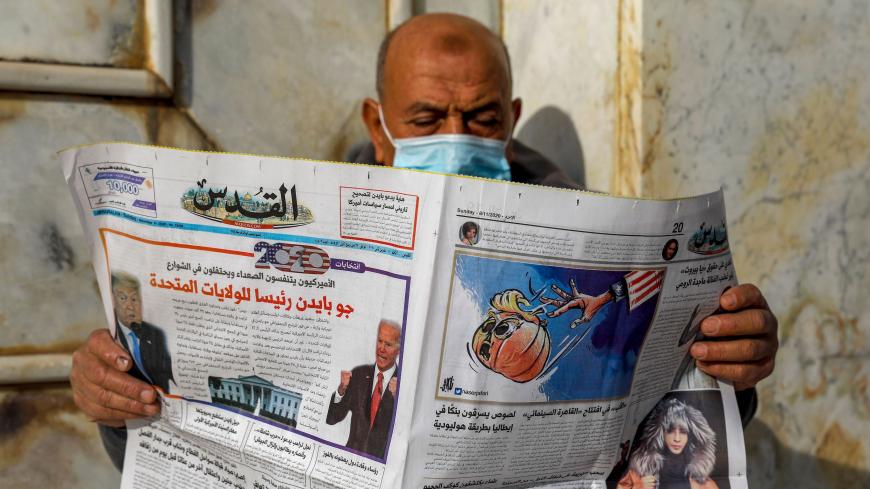 A Palestinian man reads the Al-Quds newspaper, headlined in Arabic "Joe Biden is New US President" outside Al-Aqsa Mosque in the old city of Jerusalem on Nov. 8, 2020. - AHMAD GHARABLI/AFP via Getty Images

While the Palestinian leadership was slow in congratulating the declared winner of the US presidential elections, the press has been eager to acknowledge him. The largest-selling daily, Al-Quds, announced on Nov. 7, “Biden at the steps of the White House,” with a stock photo of Palestinian President Mahmoud Abbas and former US Vice President Joe Biden.

A source in the Palestinian presidency told Al-Monitor that the official hesitation was out of fear that an unstable electoral loser could do further harm to Palestinians.

The silence was broken on Nov. 8 with a two-paragraph report on the Wafa news site that Abbas has offered his congratulations to Biden. “President Abbas said he was looking forward to working with the president-elect and his administration to strengthen the Palestinian-American relations and to achieve freedom, independence, justice and dignity for our people, as well as to work for peace, stability and security for all in our region and the world.”

Abu Zayyad, who is also the publisher and co-editor of Palestine Israel Journal, wrote in his weekly Al Quds column on Nov. 9 that Biden's victory gives the Palestinian leadership the opportunity to ease off. “There is no doubt that the Biden victory will extend the life of the Palestinian Authority for a short period, because it was on the verge of collapse if Trump had stayed in power. Hope for a solution that will end the occupation and establish a Palestinian state is the only justification for the continuation of the [PA] in power,” he wrote.

While some high hopes for Biden, Hamadeh Faraneh, a member of the Palestinian National Council (PNC), explained another reason for Palestinian elation. “Joy has spread in Palestine because of the loss of Trump, who had been a fierce enemy of the Palestinian people, insulting Palestinians and attempting to deny their legitimate national rights,” he wrote in his column for Ad Dustour Nov. 10.

Faraneh also wrote that the reelection of Palestinian-American Rashida Tlaib and a number of local state representatives of Palestinian origins was also a source of pride and expectations that the tide is turning in the United States.

Former Bethlehem mayor and PNC member Vera Baboun told Arab News Nov. 8 that with Biden's win, the international conference suggested by Abbas will now have a chance to become reality.

Along with Palestinian official's caution and the public's elation, there have also been voices of concern. Jamal Dajani, former spokesman of Prime Minister Rami Hamdallah, was among those who cautioned against high expectations. Dajani said in late October that Palestinians must look inward and get their house in order. “I am not sure if Biden as president will be able to undo the damage done by Trump,” Dajani said while calling on the Palestinian leadership to “stop banking on the United States.”

There appears to be cautious optimism that under a Biden administration, Washington will return to internationally accepted norms. In addition to the possibility of opening a Palestinian diplomatic mission in Washington and a US mission in east Jerusalem, Palestinians are hoping that Biden will abide by the anti-settlement UN Security Council Resolution 2334 approved in the last days of the Barack Obama administration.