Although officials have announced that Lebanon will export its waste as a solution to the garbage crisis plaguing the country since July, the government has yet to sign contracts with any foreign companies. 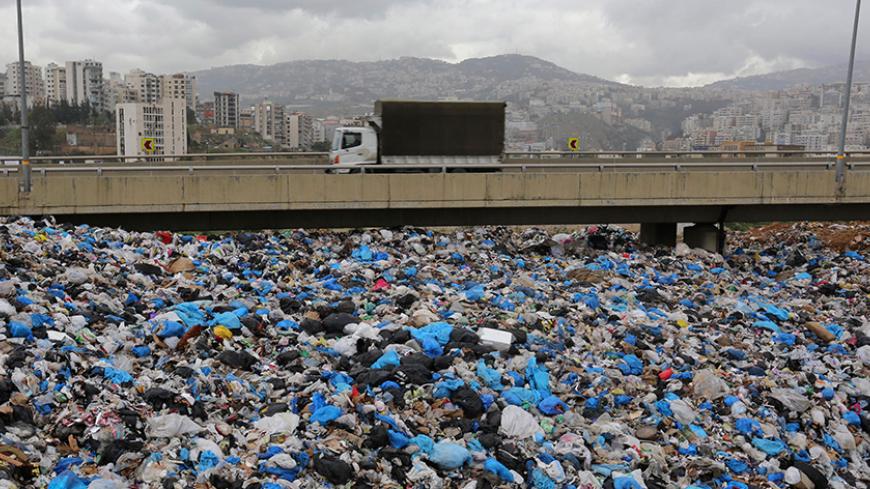 It has been six months since Lebanon's garbage crisis began in July, after the closure of the Naameh landfill and the end of the Lebanese state's contract with Sukleen, the company in charge of transporting the garbage. Still no garbage treatment and storage solution has been found by the Chehayeb Commission, led by Agriculture Minister Akram Chehayeb since September to address the garbage piling up in the streets.

Instead, the Cabinet announced on Dec. 21 that Lebanon would export the garbage as a temporary solution. But since then, waste still lies in dumps and public fields everywhere in Lebanon, rotting on the ground and being swept about by the winter rains.

Although the Council for Development and Reconstruction announced Jan. 11 that Lebanon would export its waste over the next 18 months, nothing certain can be said right now about the details of the deal.

Nabil Abou Ghanem, adviser to the Agriculture Minister, told Al-Monitor, “The export of garbage is an alternative.” He added, “We found the solution of sending it away by boat because the municipalities and civil society refused the opening of new public landfills.” This measure doesn't please everyone, and concerns remain regarding the nature of the deal, the cost of the entire process and the condition of the garbage that would be exported.

“The whole deal is quite blurry right now,” Ziad Abi Chaker, engineer and CEO of Cedar Environmental, told Al-Monitor. “I know for sure that maritime transport costs $125 per ton. And that is not the only cost; you have to add collection, transportation, sorting and wrapping of waste to a local facility, the transportation from this facility to the port, the loading on the ship, port fees and maritime transport fees. Also think of the unloading at the port of arrival and local port fees, as well as the transport and the gate fees of the local facility that would accept them,” Abi Chaker added.

According to his calculation, the whole process would cost between $250 and $300 per ton, whereas the Agriculture Ministry's office communicated to Al-Monitor an estimate of $193 per ton. Abou Ghanem said, “Port fees are not going to be applied to waste; only transportation fees from the trucks to the ships, and it is the company exporting the garbage that will take care of it.”

He added, “The rest of the cost will be supported by the municipalities at the same cost they were paying for Sukleen's services. In case of a general problem to finance this process, the government will find an alternative.”

Another issue remains at the heart of the waste being exported: will it be the new trash, still easy to sort, or the old piles still lingering from last summer and already decomposing? “The whole idea was to get rid of the old, to sort the new locally,” Abi Chaker pointed out. He added, “If the old [garbage] stays, it is an expensive measure that will be useless. Plus, it depends of the destination. If a country takes the old, it means it is a place where the Basel Convention on the Control of Transboundary Movements of Hazardous Wastes and Their Disposal is not applied.” It means that Lebanon might export toxic and dangerous garbage that could bring disease to another country.

Although the Agriculture Ministry declared that it was acting “according to the Basel Convention,” nothing is certain concerning the waste that would be exported, especially its destination. As-Safir reported Jan. 9 that it would be exported to Sierra Leone, but the African country denied this information soon after, creating a diplomatic incident with Lebanon, according to Abou Ghanem.

“We still don't know where the garbage is going,” he said, adding that “45-day-old and less waste will be sorted out locally. The French company Coral will do it in Beirut, but we still don’t know what to do about the older waste, including the waste that has been burnt. A French company and the British company Chinook will try to solve this issue.”

Chinook is the final company chosen by the Lebanese government after six international companies bid on the project, including the Dutch company Howa. Al-Monitor called both companies, but they refused to comment about the deal. Howa said it is not in the running.

The contract between Chinook and the Lebanese government is still not signed after the agreement was delayed twice in January. According to a report published by Magazine Jan. 22, a falsification by Howa is the cause of this current blockage. The company, the report alleges, provided a fake document stating that Sierra Leone had agreed to accept Lebanese waste.

The Agriculture Ministry has not confirmed this aspect of the prospective deal so far, but the head of the Council for Development and Reconstruction, Nabil al-Jisr, confirmed Jan. 29 that Chinook had obtained Russia's agreement to accept Lebanon's trash, although no official comment was made from Russia.

But this 18-month solution would be a way for the government to push the municipalities to find their own solutions to treat their waste and reduce transportation costs. “Our goal is to have zero waste through better management of the issue,” Abou Ghanem said, adding, “We have to go through this crisis in order to start recycling … and use resources that could be obtained from the sorting of our garbage,” such as energy.

He declared that the Agriculture Ministry was already using organic waste to make compost, but that it had been sorted after being collected, leaving it contaminated and useless for this purpose. He is confident that within a few months, pure compost will be available for local farmers for free, if the deal is applied and sorting solutions are found.

Sebastian Castelier contributed to this article.