How Damascus Gate became the symbol of the intifada

Confrontations between Palestinians and Israelis at Damascus Gate have heightened the symbolic importance of the largest gate of Jerusalem's Old City. 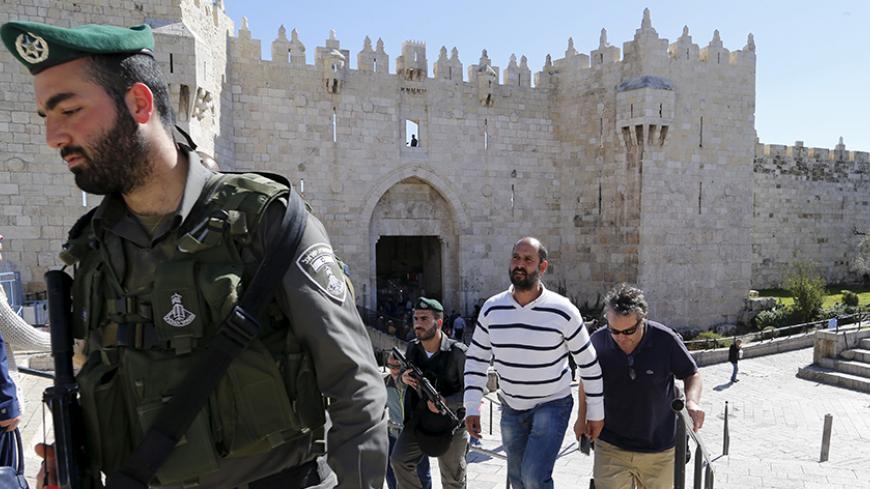 When Washington Post Jerusalem bureau chief William Booth wanted to write a column about the recent violence in Jerusalem, he went to the most obvious location — Jerusalem’s Damascus Gate. There he found exactly whom he sought to interview, but he also found jittery Israeli security officers. What transpired Feb. 16 is detailed in a statement of protest by the Foreign Press Association (FPA) in Israel.

That day, Booth and his newspaper’s West Bank correspondent, Sufian Taha, were interviewing Palestinians and Israelis outside Damascus Gate. Israeli soldiers stationed there were not pleased about this.

“When Booth and Taha tried to interview some high school students on the steps opposite the gate, police waved them away. They then retreated to interview the teenagers under a tree. Shortly after, border police waved the two journalists over and asked them for their IDs,” the FPA statement read. “Although the journalists made it very clear that they were reporting a story for The Washington Post, police took them to a nearby police station, where they were held for about 40 minutes, then released. When they asked police why they had been held, police said they had suspected the journalists of ‘inciting’ Palestinians.”

Damascus Gate has been the site of 11 violent confrontations between Palestinian protesters and Israeli security since Oct. 15, according to the Israeli Foreign Ministry. Nine Palestinians have been summarily killed in their attempts to stab Israelis there. In addition, an Israeli policewoman was killed and eight Israelis were injured. Palestinians have used live fire on at least two occasions at the gate.

Azzam Soud, a well-known Palestinian writer whose stories are often set in Jerusalem, spoke to Al-Monitor about why so many incidents take place at Damascus Gate. “First, it is the [Old City's] most important gate and the biggest,” he said. “Second, it is the closest gate to all the transportation coming from the north, and third, it is the most direct entrance to both Al-Aqsa Mosque and the famous Khan Ezzat souk, where goods of all sorts and forms can be found.”

Soud, who is also deputy director of the Palestinian Cultural Fund, noted that the beautiful gate, built by the Ottoman Sultan Suleiman al-Qanoni in the 16th century, is a popular location in literature about Jerusalem. He explained, “Novels and short stories about Jerusalem always mention Damascus Gate. The female farmers coming from the West Bank villages and selling their fresh products at the gate’s entrance are often part of the colorful imagery shaping the stories about the city.”

While the major business district of Salah Eddin Street leads to a different gate, residents' primary focus — especially after 1948 — has been Damascus Gate. Before 1948 and the division of Jerusalem, Jaffa Gate competed with Damascus Gate. It was at Jaffa Gate that Britain's Gen. Edmund Allenby entered Jerusalem. After 1948, Jaffa Gate was unusable because the border between East and West Jerusalem ran so close to it, leaving Damascus Gate as the main gate for Palestinians.

Nazmi Jubeh, a professor at Birzeit University, said of Damascus Gate, “[It] has become a symbol for the Palestinian national struggle because of its accessibility to Palestinians and the main connecting point for both worshippers and for markets.”

Jubeh, an expert on the nexus of architecture and life, recalled that for decades, Damascus Gate and the pavilion in front of it have been the site of numerous protests and demonstrations. “It has folkloric and sentimental value to many Palestinians. The leading newspaper kiosks along with women selling peanuts and the coffee shops all create this cultural icon,” Jubeh told Al-Monitor.

Shortly after the signing of the Oslo Accord in 1993, Afif Safieh, a longtime activist with the Palestine Liberation Organization and Palestinian ambassador in Moscow, London and the Holy See, was allowed to return to his birthplace, Jerusalem. Accompanied by a French TV crew, Safieh stopped by a sweet shop just inside Damascus Gate.

With every attack at Damascus Gate, the site gains ever more in symbolism, resulting in a double-edged sword of encouraging more attacks. Because of the attacks and the harsh Israeli response, some Jerusalemites have begun to refer to the gate as Martyrs Gate.

Daniel Siedman, an Israeli researcher on Jerusalem, told Al-Monitor that Damascus Gate has become a “lighting rod” for attacks because of its accessibility and the presence of Israelis. “While it is used by Palestinians, it is also on the route of ultra-Orthodox worshippers and Old City settlers, which means a constant heavy police presence and a permanent target,” Siedman said.

Amnon Ramon, another Israeli researcher, explained to Yediot Ahronoth on Feb. 18 why Palestinians use this gate. “I guess that their aim first of all is to attack police officers, and second of all settlers.” Attacks by Palestinians have generally not been directed at civilians living inside the Green Line, but at security forces and settlers, the researcher said.

The continued confrontations at Damascus Gate have produced an unprecedented security clampdown. Israeli soldiers are constantly harassing and conducting body searches of almost every Palestinian entering the Old City. The Israelis have been so shaken up that they have even subjected members of the international press to their repressive measures, bringing even more attention to the place that has clearly become the symbol of the current wave of protest for Jerusalem’s Palestinians.