The recent attacks and demonstrations in Jerusalem have affected the economy, according to Palestinian merchants in the Old City. 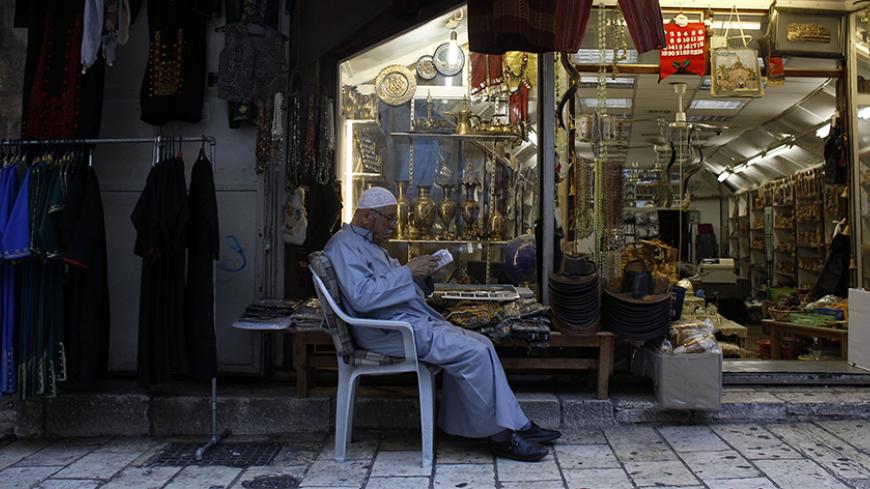 A shopkeeper reads the Koran outside of his store in Jerusalem's Old City, Sept. 1, 2010. - REUTERS/Ammar Awad

JERUSALEM — Tucked away in the alleys of the Old City, many Palestinian merchants are taking hits to their businesses as a result of the recent unrest in Jerusalem. Due to the attacks on police and civilians, as well as demonstrations by both Jews and Arabs in the area, police presence in the Old City is extremely high. Sometimes roads and entrance gates are closed, and police checkpoints are a common sight.

The Israeli police view such measures as necessary given the copious number of violent attacks in such a short period of time. Palestinian merchants, on the other hand, believe the restriction on the freedom of movement and fear among tourists are hurting their businesses. They estimate that their sales have dropped significantly — by more than half in some cases — since violence began in mid-September. At an already volatile time, this is breeding discontent among the city’s Palestinian merchant class, who blame the Israeli police for the economic downturn.

Commentators have speculated on whether recent demonstrations and attacks against Israeli targets by Palestinians constitute a third intifada, but certainly some sort of escalation is already underway. And Jerusalem is not immune to the uptake in violence. On Oct. 10, two stabbings occurred here. At around 11 a.m., a Palestinian teen knifed two Israelis walking near the Old City. That afternoon and a few blocks away, another Palestinian knifed Israeli policemen at Damascus Gate. The perpetrators were shot to death at the scene in both instances. The Israeli policemen and the two Israeli civilians survived with varying degrees of injuries. Moreover, the hashtag “the intifada has started” is currently trending on Twitter. The stirrings of a new intifada reminiscent of the early 2000s definitely exist.

The road and entrance gate closures that have ensued the violence are taking a toll on the city’s economy, according to merchants in and around the Muslim Quarter. “There is no freedom of movement, so of course there is less business; it’s down 90%,” Wajdi Reshek, a grocer near Damascus Gate, told Al-Monitor. The first knife attack Oct. 10 occurred just outside his store and resulted in the Israeli police blocking off the area for several hours. At one point, civilians marched toward the crime scene throwing rocks, while the police used smoke grenades.

Firas Abu Shemsiya, who sells spices, herbs and oils near the Old City’s Jewish Quarter, believes the situation has negatively affected his sales. “The problems here began two weeks ago. … Since then there has been less work,” he told Al-Monitor. Like Reshek, he attributes this to the security situation since the outbreak of violence. He added, “As you can see, there is police everywhere,” pointing to a fence manned by three police officers a few feet from his store.

In addition to disruptions to tourist traffic, some merchants believe fear among tourists is keeping them away from the Old City. “People are afraid of the events and less are coming,” said Ahmed, who sells spices next to Abu Shemsiya and declined to give his full name to Al-Monitor. He estimates his sales have gone down 10% over the past two weeks.

This is not to say tourists are not coming to the Old City — plenty continue to do so. But as tourists constitute the bulk of customers for many of the Old City’s merchants, any significant decrease in visits can hurt the local economy. “We sell jewelry to tourists. [Before the attacks] there was a lot of business — 10-12 customers a day. The last two days [Oct. 9-10] there has been no one,” Majd, another merchant near the Jewish Quarter, told Al-Monitor on condition his last name not be revealed.

Demonstrating the effects of the security measures taken by the Israeli police after the stabbings, Damascus Gate and Lions Gate were both closed within minutes of Majd’s interview with Al-Monitor Oct. 10, and remained that way for around two hours. A closure such as this prevents tourists, who are potential customers, from reaching the shops in the Old City. To make matters worse, attacks in Jerusalem appear to become an almost daily occurrence.

This economic and security situation is breeding discontent toward the government among the area’s Palestinian merchants. The merchants blame the Israeli government for the police checkpoints, road closures and other security measures that is causing the present economic woes.

Ahmed took it a step further and said, “The government is with the settlers. There is no balance.” Given the number of demonstrations in Arab locales throughout Israel, the West Bank and the Gaza Strip, he is not alone in his thinking. “The intifada has begun,” said Abu Shemsiya.

The demonstrations in and around the Old City itself are further adding tension to the situation. On Oct. 8, Al-Monitor attended a gathering of hundreds of Jews at the Western Wall and elsewhere in Jerusalem. It was a true display of patriotic fervor. Draped in Israeli flags and hoisting banners, they marched through the Old City. Ultimately, a group of them made it into an Arab neighborhood of East Jerusalem where standersby heard them yelling anti-Arab racial slurs.

The following day, Al-Monitor witnessed a local imam delivering a fiery sermon near Damascus Gate. Surrounded by a heavy security and media presence as police anticipated violence, he led around 50 Friday worshippers in chanting “We sacrifice our blood and our soul for Al-Aqsa.”

Income from tourism constitutes a large part of the Israeli economy. According to statistics published by the Israel Ministry of Foreign Affairs Jan. 5, 3.3 million people visited the country in 2014. This brought 41 billion Israeli shekels (around $10.7 billion) to the Israeli economy. The ministry further stated that Jerusalem received by far the most tourists of any city at 82%. The fact that shopkeepers are seeing less revenue thus represents a risk to the economy of the country as a whole.

While Palestinian merchants lament the decrease in economic activity allegedly as a result of security measures, the Israeli police believe such measures are necessary to maintain public safety. At 3:47 p.m. on Oct. 10, Israeli police foreign press spokesman Micky Rosenfeld tweeted: “Second stabbing attack near Damascus Gate moments ago. Police units respond at the scene. Area closed off.” The speed by which he disseminated this information demonstrates the Israeli police’s belief in the necessity of such measures.

Later that day, Rosenfeld published a second tweet saying that extra police had been deployed to Jerusalem in what he described as “measures necessary to prevent and respond to recent attacks.” This further exemplifies the police’s support for the increased security. It is common for large crowds to gather at such scenes, sometimes throwing stones as happened after the first attack near Damascus Gate Oct. 10. This provides some support to Rosenfeld’s argument for the necessity of such measures.

The merchants of the Muslim Quarter in Jerusalem’s Old City find themselves conducting business in an increasingly hostile environment. As attackers go after the police and civilians, and police respond, security restrictions and tensions on the street will only continue. The ramifications of the Israeli-Palestinian conflict go beyond death tolls, terrorist attacks, checkpoints and bombs. The conflict affects the daily lives of workers trying to make a living. Just ask the Old City’s merchants.