Israel's increased security presence in the Old City of Jerusalem has left some Palestinians there feeling anything but secure, so they are taking peacefully defiant measures to demonstrate their rights in the city. 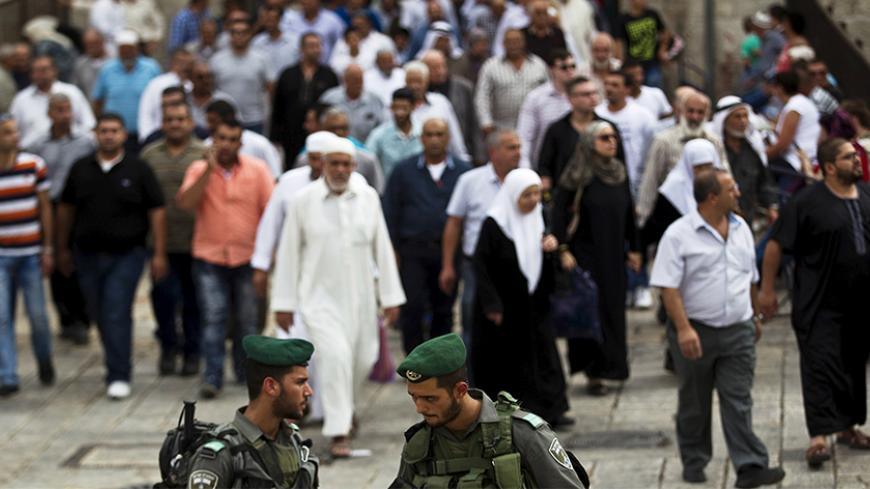 EAST JERUSALEM — Some 50 years after his father bought a shop in Jerusalem, Farag Ibrahim Abdul Rahman is trying to maintain the antiques store, although very few customers come in these days.

Abdul Rahman, who was only 5 years old when his father bought the shop in the heart of Jerusalem’s Old City, took over 30 years ago. Things have changed a lot in that time — especially in the past two months.

“The economic conditions in the city of Jerusalem have drastically changed. It all began in 2000 when the [Israeli-West Bank] barrier was built and the residents of the West Bank were banned from entering [the city]. But the market has been dead since October, when the occupation forces started carrying out random shootings, killings and arrests under the pretext of preventing young men from carrying out attacks,” Abdul Rahman told Al-Monitor.

During an interview with Al-Monitor, Abdul Rahman excused himself to welcome customers into his shop. They were a group of tourists from Italy and it was after 2 p.m. “Those are the first to enter the shop today,” Abdul Rahman noted.

After looking around and asking about prices, the tourists left without buying anything. “This is always the case with tourists. They visit the eastern part of the city to see touristic sites, but they never shop or eat at Palestinian shops and restaurants. They go back to the western part, which has been occupied since 1948, to shop and visit hotels and restaurants,” he explained.

The entire old city market is suffering this way. Yet shop owners still insist on opening their stores despite the lack of customers. Abdul Rahman said it's how they cope with what they see as Israel attempts to empty the Old City and control it.

“The purpose of such measures is to empty the Old City of all Arabs and keep the settlers only. With our resistance, we are fighting the settlement [policy], which is completely supported by settlement organizations and the Israeli government, while our only weapon is our will to stay and our faith in our right to be in this city,” he added.

Abdul Rahman has five children. He said he does not fear for their lives because he believes in fate and that human life is held only in God’s hands. He also believes that carrying on with their normal life without showing fear is “a duty of mine as well as my children, because they are no better than the martyrs, the detainees or the wounded.”

Not far from Abdul Rahman’s shop is one owned by Jerusalemite Hassan al-Huroub. Huroub, chairman of the merchants committee in the Old City, spoke to Al-Monitor about the deep recession and the bad economic and security situation.

“We used to suffer from the Israeli authorities' measures of not allowing people from the West Bank to come into the city after 2000," he said. But now, even Jerusalemites themselves are restricted by their "fear of the occupation’s measures and the increased presence of armed occupation soldiers who are constantly ready to open fire."

According to Huroub, the Old City's main street, which stretches from the Damascus Gate to Al-Aqsa Mosque, looks deserted, except for some youths and merchants who are seeking to keep the area alive, despite a curfew.

“With the outbreak of the events after Muhannad al-Halabi stabbed two Jewish settlers and injured another in October in the Old City, the market has been almost empty,” he noted.

This security situation pushed a group of activists and youths from Jerusalem to confront what they see as Israeli attempts to terrorize and intimidate Jerusalemites through shootings and attacks against women and children. These youths called on people to take to the streets, to get out of their houses and shops and sit in the markets of the Old City. This step came Oct. 12, after a video surfaced of Ahmed al-Munasira, 14, who was shot and left to bleed on the ground for more than an hour before he was arrested.

This youth action started in mid-October when a group of young men sat on the stairs near the Damascus Gate to drink coffee. Jerusalemites had stopped going to the Damascus Gate in light of the increased presence of Israeli police and army forces there.

These youths posted pictures of themselves sitting there on their Facebook pages using the hashtag #WeAreNotAfraid and #OurCoffeeOnDamascusGate. Jerusalemites followed suit and headed to the Damascus Gate — which is considered the entrance to the Old City and is packed with merchants and shoppers — to sit on its stairs themselves.

Ahmed Rwaidy, who is in charge of Jerusalem cases for the Palestinian Authority (PA), said, “This is not the first time the residents of East Jerusalem have suffered from such a situation, but what we are witnessing are much harsher security measures.”

He told Al-Monitor that Israeli soldiers are using extreme measures, "shooting directly and killing anyone they suspect.”

Rwaidy noted that Israel deployed hundreds of police and special forces, established more than 30 military checkpoints across the city and arrested children.

“We were really afraid to let our children go outside or send them to school, especially following the shootings at students and children. The shootings remain today, but at a decreased pace,” he added.

Rwaidy referred to the shooting of 16-year-old Marah Bakir as she was leaving school Oct. 18 in Sheikh Jarah. Bakir was shot at directly because Israelis suspected she was involved in an armed attack. Also, Mohammad Majid al-Zaghl, 14, was arrested Oct. 28 on his way back from school in the town of Salwan for carrying a wooden ruler.

Palestinian factions have not developed any formal procedures to cope with the situation, Rwaidy said, as they did in the first and second intifadas when the PA helped Jerusalemites on moral and financial levels by taking action on the ground.

However, a Jerusalemite delegation met Nov. 4 with Jordanian King Abdullah II in Amman to discuss the ground developments and the Israeli measures, according to Rwaidy. The delegation included members of the Jerusalem Islamic Waqf, Muslim and Christian figures, and academic and political representatives.

What reassures Rwaidy and other Jerusalemites about their ability to overcome their fear is their “steadfastness on the ground despite all the Israeli measures taken." They remain aware of their right to the city regardless of Israel’s measures. Jerusalemites know that their presence on the threshold of the Old City and the Damascus Gate stairs are their means of confronting Israel.

"No checkpoint or security prosecution and detention are capable of forcing us to leave our homes,” he said.