How to overcome Iraq’s economic crisis

Iraq's economic recovery requires strong institutions and infrastructure, but with no time to wait for stability, the state should provide financial support and administrative facilities to help small businesses grow now. 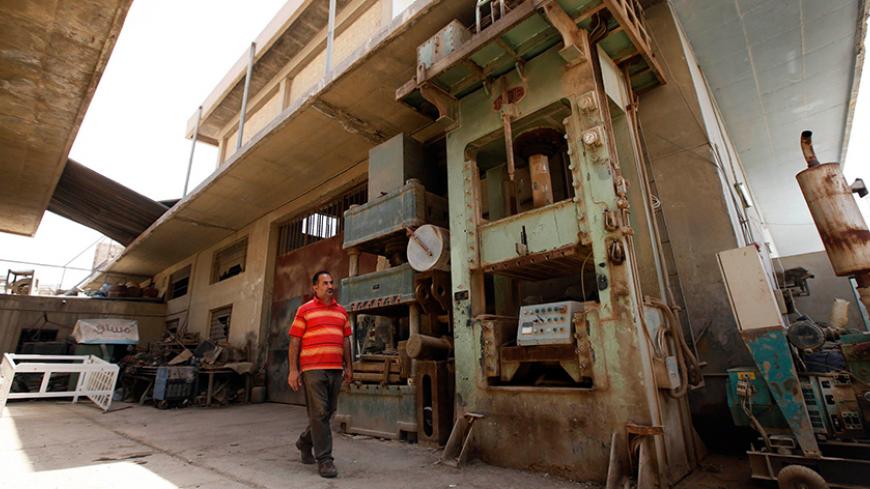 An Iraqi machine-maker walks past a former factory in Baghdad, June 13, 2011. - REUTERS/Mohammed Ameen

Iraq’s economic crisis is about to get worse. The government, which relies on oil for 90% of its revenue and 80% of foreign exchange earnings, faces plunging oil prices combined with rampant corruption and the exorbitant cost of battling the Islamic State (IS). Iraqi officials must come up with solutions that take all those circumstances into account.

The country's economic problem is influenced particularly by two factors. The first is related to Iraq's socialist economic system and its absence of an economic infrastructure and free active market correlated with global markets. The Iraqi infrastructure is significantly damaged as a result of long-term wars and sanctions. The economic system was mostly controlled by the government for more than half a century. Although the private market has significantly grown since 2003, it remains weak. Moreover, the local private market does not contribute to the global market.

The second factor is linked to the general political and social situation of the country, which experienced years of dictatorship, from the military revolution in 1959 until 2003 and under several regimes, the last being that of Saddam Hussein. The country also suffered sanctions imposed following Iraq’s invasion of Kuwait in 1990. The sanctions were gradually lifted beginning in 2003.

Various institutions have studied potential solutions to the crisis affecting all of Iraqi society. For example, the Washington-based Consultative Group to Assist the Poor suggests potential solutions in a blog series covering different parts of the Arab world. The organization noted that comprehensive solutions become difficult to achieve in countries plagued by conflicts and vulnerable economic structures. But it said microfinance — "providing credit, savings, payments and insurance to low-income households and small businesses — is one intervention poised to promote local economic activity and help manage economic shocks."

In principle, economic success cannot be achieved without strong institutions and infrastructure. Yet, Iraq’s situation cannot wait for stability to be achieved and costly conflicts to end, so that the state can accomplish major, comprehensive development projects. In this case, the state can provide financial support and administrative facilities to help small businesses succeed and perhaps expand into big businesses in the future.

Toward this end, the government must undertake four steps.

The first is to facilitate and strengthen banking transactions so that citizens have access to investment loans. World Bank statistics for 2014 showed that only 11% of Iraqis have accounts in Iraqi banks, and only 4% of Iraqis were provided formal bank loans. The reason is the underdeveloped, bureaucratically controlled banking system. Most Iraqi banks do not provide electronic banking, and opening new accounts is a lengthy, multistep process. In addition, most of the banks do not provide credit and debit cards or ATMs.

The second step is to develop efficient public transportation so small businesses can afford to transport their goods. The postal service is still inefficient in Iraq, and private mailing services such as DHL are expensive and unavailable in many areas.

Al-Monitor asked a number of small-business owners about the challenges they face. Most of their answers focused on reaching and communicating with clients. Baqir al-Ahmed Rashid, a young man from Baghdad, opened a web-based business selling books, magazines and other publications. He envisioned his business becoming a kind of local Amazon, but his project failed after two years because of delivery problems.

The third step Iraq must take is to find a startup platform to host and support pioneers of microeconomic projects and put them in contact with potential investment partners. In other countries, many successful small businesses have been launched from such coworking spaces.

The fourth is to promote the insurance sector in the country so small-business owners can protect their companies. Insurance companies encourage investors to support small businesses safely.

The small-business sector needs more media exposure to recruit workers, who often turn to the government for employment. Iraq's government payroll is overwhelming, though even government officials disagree on its size. In a Sept. 10 TV interview, Prime Minister Haider al-Abadi said there are more than 4 million government employees — 20% of Iraq's entire labor force. Ministry of Planning spokesman Abdul Zahra al-Hindawi told news site Raseef 22 there are 6 million government employees, but his most disturbing statistic was that the average employee is only productive for 10 minutes per day. The unemployment rate in Iraq increased steadily from 15.1% in 2013 to 16.4% in 2014 and finally reached 17.6% in 2015.

Supporting small business is very important in the IS-liberated areas, which urgently need development projects to provide the minimum requirements for stable living conditions. This achievement would enable the displaced to return to their areas and stand strong in the face of IS efforts to find recruits and establish cells to restore its control over these areas.