Moneylenders are taking advantage of small business owners looking to expand their enterprises in Iraq, where support from banks is almost nonexistent. 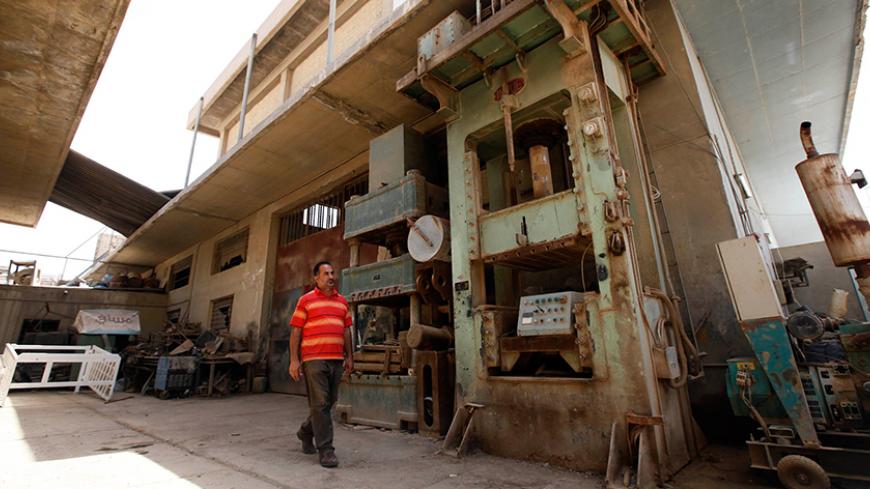 Machinist Raad Qassim walks past an abandoned machine in a former factory in Baghdad, where Iraqi entrepreneurs see no support for small and medium-sized private industries, June 13, 2011. - REUTERS/Mohammed Ameen

BAGHDAD — In order to expand his men's shoe business, Mohammed Jizani had to borrow $100,000 from a loan shark. As is common in such cases, he was forced to pay the lender $4,000 a month in interest until the final payment on his debt.

Jizani, who owns four shops in Baghdad, imports most of the goods he sells from Turkey. He tried to get a loan from local banks, but lacked sufficient collateral. Even the feasibility study he prepared to outline the profits he expected from his business proved useless.

"Dealing with the usurer is easy," he said sarcastically, "while banks do not seem to be interested in small business expansion.”

Al-Monitor found out that the Iraqi moneylender Jizani dealt with owns a foreign exchange office in the Jamila area, east of Baghdad. He lends money to merchants like Jizani and has developed relationships with owners of small factories that produce foodstuffs as well as wholesale food stores.

Charging excessive interest, called "riba" in Arabic, is prohibited as a sin under Islamic law. But Jizani, a practicing Muslim, said a lack of liquidity can lead otherwise dedicated Muslims to make deals with predatory lenders.

Such was the case with Ahmed Jabbar of Baghdad. Extended unemployment led Jabbar to buy a taxicab with money from such a lender. But he said he believes the money he borrowed does not constitute an act of riba. He told Al-Monitor, “I took from one of the operators $10,000 and I will pay them back in Iraqi dinars with an interest amount equivalent to about $3,000.”

In light of the current economic situation in Iraq, ethics sometimes are disregarded, and what is forbidden by religion is allowed in commercial transactions. Thus, in Iraq’s wholesale market, moneylenders freely exploit borrowers.

Loan sharks say many things to justify their practices. One told Al-Monitor on condition of anonymity that his activity allows merchants to conduct their business more easily with "low" interest rates, and he does not believe his activity constitutes an act of riba. “I invest these amounts in trade activities. I know where they are used and in which field they will be spent,” he added. “In fact, I simply set my profits in advance. I charge $400 per month for every $10,000 I lend to merchants, and this is a fair deal for all.”

Some merchants invoke religious fatwas issued by unknown sources that allow for borrowing money and paying the amount back in a different currency. This loophole makes the loan "permissible."

Majida al-Tamimi, a member of the Parliamentary Finance Committee, commented on this type of maneuvering. She told Al-Monitor, “Borrowing money in a given currency and paying back the loan in another currency is certainly a circumvention of Sharia.”

Tamimi is a member of one of the most radical Shiite parties in the Iraqi parliament, the Sadrist movement, and is known for uncovering government corruption. She told Al-Monitor she was unaware of a dramatic spread of usury in Iraqi society and said the finance committee has not discussed the matter. However, she acknowledged that a lack of liquidity may have pushed many Iraqis to turn to loan sharks.

On the other hand, Maitham Luaibi, an economics professor at the University of Mustansiriyah, believes high-interest loans are nothing new to Iraqi society or its economy. “The Iraqi government will not be able to contain this phenomenon by imposing coercive measures to prevent and punish those dealing with riba,” he told Al-Monitor. “This phenomenon may be countered by revitalizing the banking system, granting soft loans, providing banking activities with e-payment systems and facilitating procedures for clients, especially with regard to short-term loans and small and medium-sized enterprises.”

In the same context, Majid al-Souri, a board member at the Central Bank of Iraq, said there is a problem in extending loans to merchants. He noted the Iraqi Company for Financing Small and Medium Enterprises has capital of about $14 billion, but “the general economy in Iraq does not allow the provision of funds for the development of small enterprises, since [the economy] relies on investments.” He added, "The new reform package adopted by the government of Prime Minister Haider al-Abadi aims to mend this deficiency by supporting local investments and projects.”

Al-Monitor contacted four private banks for comment, but all four declined to speak. One private bank manager told Al-Monitor on condition of anonymity, “The problem lies in the lack of mechanisms guaranteeing the settlement of sums granted as loans to merchants in the event of the borrower’s violation of the terms of the contracts signed with them. The Iraqi authority is weak and unable to guarantee the rights of banks.”

There does not seem to be a clear plan for the Iraqi economy. Moreover, the political turmoil that has plagued Iraq for more than a decade makes it very difficult for banks to support the local economy, especially small and medium enterprises.