The sanctions both hurt and helped Iran’s high-tech industry. 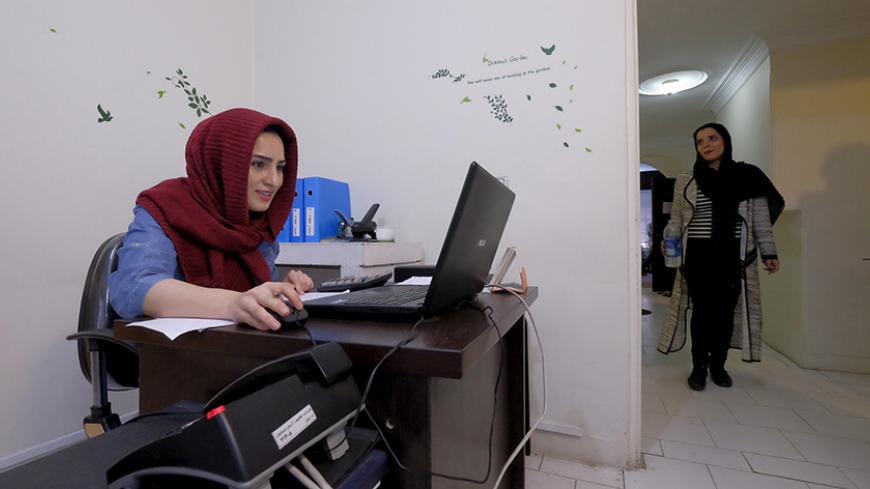 An employee works with her laptop at Takhfifan, a tech company based in Tehran, Jan. 19, 2016. - REUTERS/Raheb Homavandi

As Iran moves to take advantage of the sanctions relief extended under the Joint Comprehensive Plan of Action, the recent drop in crude prices means that Tehran won’t be able to count on soaring oil revenues in the near future. What’s worse, the declining oil prices will affect the energy-intensive domestic industry, which has benefited from the high crude prices as it has been receiving indirect subsidies in the form of cheap fuel. In essence, this means that the energy-intensive Iranian industry is about to lose its competitive advantage in the global market. However, things are not all bleak. Iran has an asset that could potentially partially be relied on to tackle the issue of economic growth in the long term: its high-tech sector.

For years, Iran has been investing in industry reliant on intensive research and development (R&D). This policy has been a rare point of consensus in Tehran, which often sees controversy over economic policy driven by political rivalries. Indeed, Supreme Leader Ayatollah Ali Khamenei has called for the advancement of a knowledge-based economy, and in this vein, support for domestic high-tech firms. These companies have been benefiting from special tax exemptions, financial incentives and laws to ban imports of products whose equivalents have been produced domestically, among other measures.

The Islamic Republic’s 20-Year National Vision foresees Iran ascending to the top tier “in the areas of economy, science and technology in the western South Asia region (which includes Central Asia, Kyrgyz regions, the Middle East and neighboring countries).” The trend of increasing Iranian non-oil exports in recent years suggests a trajectory toward the latter objective. Indeed, according to the International Monetary Fund, Iranian non-oil revenues as a share of total fiscal revenues during 2012-14 were the highest among all oil-exporting Middle Eastern and North African countries at 56%. In comparison, the corresponding figure in Saudi Arabia and the United Arab Emirates was 20% and 31%, respectively. Furthermore, as of 2014, 36 science and technology parks hosting more than 3,650 companies were operating in Iran. These firms have directly employed more than 24,000 people. In addition, Iran is projected to increase the share of R&D in its gross domestic product, from the current 0.5% to 2.5% in the near future.

Sanctions were detrimental to Iran’s high-tech sector in primarily two ways. In relation to the supply chain, they made it difficult for manufacturers to purchase necessary components. Hence, manufacturers had to pay higher prices, with longer production lead times — which ultimately resulted in higher production costs. On the sales end, the sanctions caused a shrinking of exports and lack of interest in long-term contracts on the part of foreign companies. Furthermore, the high-tech sector was stripped of highly talented technicians — a trend that continues, notwithstanding the mild improvements during the past two years.

However, the sanctions also had a positive impact. For instance, they secured the domestic market for Iranian tech firms. In many cases, the final prices of imported high-tech goods were so high that customers preferred to purchase domestically designed and manufactured goods. Moreover, in relation to government procurements, there was a deliberate policy with compulsory regulations in place to prefer domestic products over imports. Hence, R&D investment in some fields became highly profitable during the sanctions era.

The question now is how the sanctions relief will impact Iran’s high-tech industry.

The answer can be divided into three categories. First, Iranian companies will get easier and more timely access to necessary components, materials and software, which could result in cheaper final product prices as well as shorter lead times. Second, the sanctions relief could help Iranian companies retain skilled technicians for a longer time, as one of the main challenges of R&D-intensive firms in Iran has been that they lose talented staff as part of the disastrous brain drain. Moreover, Iranian experts living abroad may be willing to return and contribute to the domestic high-tech industry if noteworthy change in the working environment takes place. Third, the sanctions relief could expand potential markets for Iranian high-tech firms to go beyond the current mainly Iraqi and Afghan markets to more lucrative ones in East Asia and Oceania, Central Asia, Europe and even the Americas. In particular, small- and medium-sized high-tech companies that generally lack strong brands could export their goods in the form of OEM contracts, which is the most viable and lucrative option for many Iranian firms as some of them have been manufacturing products for European brands for years.

Despite the benefits of sanctions relief, the bigger picture is that it is not a panacea for Iran’s R&D-intensive industries. Government policies play a far more important role in the equation. In this vein, the administration of President Hassan Rouhani should guarantee continued easy access to the domestic market for Iranian high-tech firms, since it is their sole lifeline in terms of revenue. Sanctions relief should not be allowed to result in a flood of foreign products at the expense of domestic ones — especially when it comes to procurement by government and semi-governmental companies.

Furthermore, Iran should reform its diplomatic apparatus to enable it to find new markets for Iranian firms by more aggressively engaging in business diplomacy. The current state of the diplomatic apparatus is not prepared for such a task, as trade, business and economic affairs have not been defined as a top priority for Iranian diplomatic missions abroad. In this vein, the Islamic Republic needs to establish a sophisticated interdepartmental organization dedicated to foreign business and trade, with commercial attaches and offices abroad that could do much more than the existing Trade Promotion Organization of Iran or other similar entities. Besides, retaining long-term competitive advantage in the R&D intensive sectors requires more effective scientific and academic exchanges with the world. In the post-sanctions era, this could come through joint educational and research programs with advanced scientific centers as well as academic exchange programs. Providing a vibrant, cutting-edge scientific environment and lucrative business incentives could ultimately result in the return of Iranian experts, entrepreneurs and investors living abroad, all of whom could help speed up the growth of the high-tech sector.

Finally, Iranian policymakers should more consider the broader, long-term trend at play: Oil revenues can no longer be seen as the main source of government revenue, the country’s agriculture sector is in crisis and the energy-intense industry no longer enjoys the competitive advantage afforded by cheap energy. In this environment, more investment in high-tech and R&D-intensive industry could be a potential solution to the dilemma of how to provide opportunities for Iran’s highly skilled but cheap workforce.

by Murielle KASPRZAK and Joseph SCHMID | AFP | May 26, 2022
END_OF_DOCUMENT_TOKEN_TO_BE_REPLACED