How one messaging app is changing Iranian media

While news shared on Telegram allows Iranians to bypass restrictions and censorship faced by licensed Iranian media outlets, the impact of the smartphone app may not be entirely positive for Iranian society. 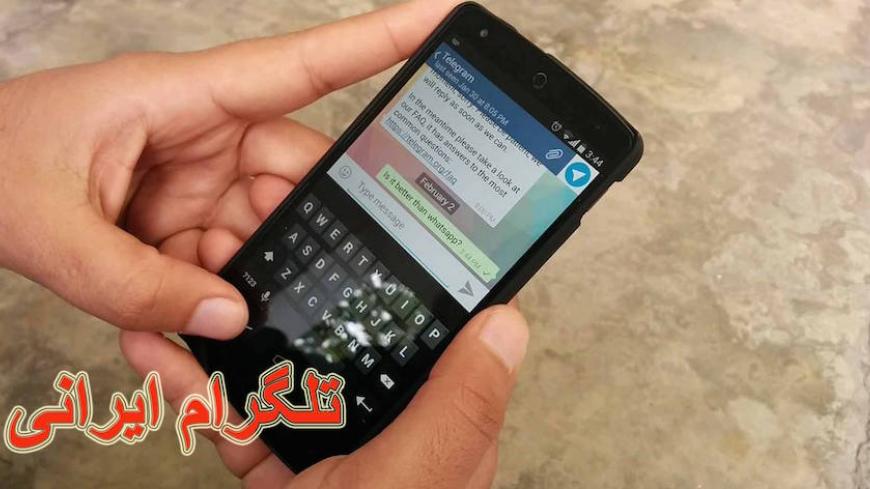 TEHRAN, Iran — “A grandson of the late founder of the Islamic Republic of Iran has been disqualified from running for the Assembly of Experts”; “The Joint Comprehensive Plan of Action has reached a deadlock”; “The bodybuilding champion of Iran and the world has been killed in a street fight”; and “Following in the footsteps of Djibouti and Sudan, Tunisia has also severed its ties with Iran.”

These are some of the stories that have been widely circulated among Iranians in recent weeks — but they weren't reported by any of the licensed Iranian media outlets. Thanks to the power of social media, where ordinary Iranians can produce and broadcast their own news, many of these stories find their way into people’s homes. The same, unfortunately, also goes for mere rumors.

First it was Facebook, and then the smartphone messaging apps Viber and Line. Now, however, the hottest communication tool among Iranians is Telegram. It has more advanced features than its predecessors, and enjoys a high level of influence in Iranian society. Information and Communications Technology Minister Mahmoud Vaezi said there are roughly 13 million to 14 million Telegram users in Iran. More recent surveys, however, put this figure at over 20 million. The simplicity and ease associated with using Telegram has prompted users to see themselves as a rival of licensed media outlets. In fact, many governmental organizations are now using Telegram to create a bridge to communicate with their audiences.

Ali, who works for a contracting company in Tehran, told Al-Monitor that he spends more than six hours a day on Telegram. “At work, while commuting and even when I’m relaxing at home — I constantly have my cellphone in hand and am either communicating with friends or reading the latest news stories on the different Telegram groups and channels. I think with all the mental stress that exists today, it is impossible to browse through all the newspapers and news websites; Telegram gives you the headlines in a clear and concise way,” Ali said.

Some surveys suggest that the average person in Iran only spends two to 17 minutes per day reading, leading senior establishment officials to voice their concern. Sociologists believe the decline in time spent on reading is due to the increased amount of time people spend on social media networks.

Mozhgan, a Tehran-based food industry expert, told Al-Monitor, “I use Telegram about four to five hours a day to learn about the news and also to see how my friends are doing.” Mozhgan is fully aware that the news broadcast through Telegram is not always precise. He said, “Telegram hasn’t replaced newspapers, magazines or websites for me, because false information and rumors have many times been broadcast through social media networks in the context of news or [expert] analysis.”

Inaccurate news reporting is not the only problem that social media networks, and especially Telegram, are to blame for in Iran. The main problem is perhaps these messaging services’ impact on licensed media outlets. For instance, Telegram groups and channels have the ability to broadcast news without the usual restrictions and censorship placed on the licensed media. Problems arise when this creates uncertainty about the accuracy and precision of the stories in question.

Telegram groups and channels are mushrooming in Iran, encouraging ordinary Iranians to create channels of their own where they can share news stories with people they choose, and those people's followers. In several instances, it is unclear who the administrators of Telegram groups and channels are; they, at times, have turned out to be more influential than the licensed media. Indeed, many of the rumors that are eventually dismissed by official media outlets often have their roots in Telegram. For instance, when several Arab and African countries cut ties with the Islamic Republic after the Jan. 2 attacks on Saudi diplomatic facilities in Iran, a Telegram channel with an unknown administrator broadcast the claim that Tunisia had also severed ties with Iran. The rumor gained such circulation on Telegram that it even found its way to the government. One source in the Ministry of Foreign Affairs who spoke to Al-Monitor on condition of anonymity said, “The rumor about Tunisia severing relations created a challenge for the Ministry of Foreign Affairs, because a high-ranking official saw the news on Telegram and asked the ministry to provide more details on the matter — all the while we knew that this was only a rumor.”

The real question is perhaps why Iranians are so welcoming of news reported on Telegram. Roya Salehi, a psychologist based in Tehran, told Al-Monitor, “Concerns associated with modern life, low levels of interest in reading and the appeal of odd and controversial stories have steered people toward such news. This is not to mention the absence of the usual restrictions associated with official media outlets that has caused Telegram users to turn to what I call the copy/paste industry. In addition, there are those who are pursuing a specific political, economic or personal agenda and therefore broadcast their news stories accordingly.” The staggering speed of the spread of news and rumors on Telegram has caused serious challenges for licensed media outlets.

Mohammad Mehdi Rahimi, political and foreign policy editor of Mehr News Agency, told Al-Monitor, “Telegram users are not looking for in-depth topics and prefer to review things by using simple language without any complexities and in a limited number of words. This means that the spread of Telegram will also affect the official media, because the media — whose main task is to attract audiences — will lose their audience. An example of this can be seen in the recent ranking of Iranian news sites by web analytics firm Alexa.” Ultimately, the impact of Telegram on Iran’s media landscape can be more influential than most people can imagine."

He added, “An environment like this will prompt official media outlets to move toward the interests of the audience in order to attract more people, thereby showing further interest in channels such as Telegram. This is a cause for further problems such as imposing limitations on word count, lack of precision in preparing stories, preferring speed over accuracy and so on. All of this goes against the main responsibilities of the professional media and journalism.”