After banning Telegram, Iran's conservatives are now returning to the messaging app to protect Iranians from "the poisoned propaganda of the enemy." 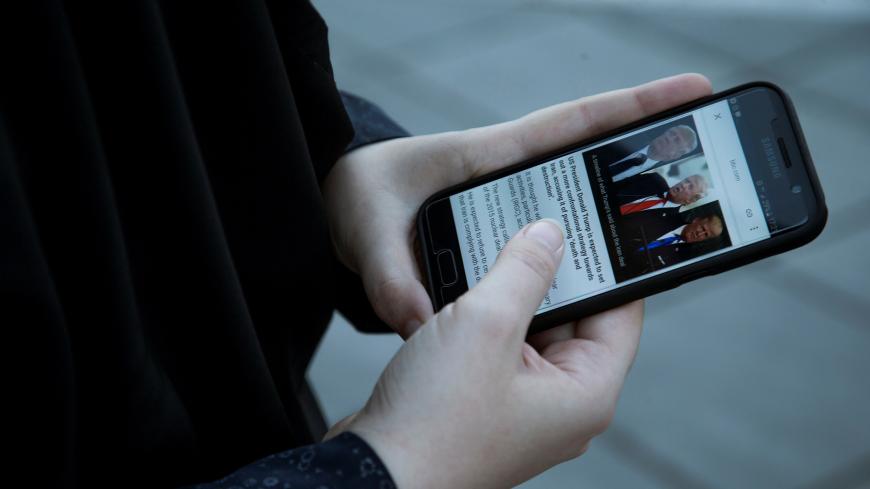 A woman displays pictures of US President Donald Trump as she follows the news on her mobile phone in Tehran, Iran, Oct. 13, 2017. - Nazanin Tabatabaee Yazdi/TIMA via REUTERS

When hard-liners in Iran succeeded in banning the popular smartphone messaging app Telegram, they were unlikely to have predicted that they would return to the very same platform seven months later.

On April 30, the conservative-dominated judiciary ordered internet service providers to block access to Telegram, despite opposition from Iran's moderate government. The messaging app, which has more than 42 million users in Iran, played a major role in the re-election of President Hassan Rouhani in 2017. Ayatollah Sadeq Amoli Larijani, the head of Iran's judiciary, said the judiciary acted against the app due to "thousands of lawsuits" against Telegram.

"[We] contacted the Telegram authorities through the responsible officials [in Iran] and [we] asked them to help identify and introduce the offenders, but they did not [provide any help] on this matter," claimed Amoli Larijani on May 7. "That a messaging [application] becomes a safe haven for criminal acts and individuals [to] commit any criminal offense, from frauds to crimes against the reputation of persons and terrorist acts, is not acceptable for any country. Is it reasonable and logical to accept that a person, while offering some services in a physical and realistic way, turns that place into a safe haven for criminals? Cyberspace has exactly the same status."

The judiciary thus ordered internet service providers to "block Telegram so that it won’t even be accessible through proxy tools." However, the judiciary’s wish did not come true, as Iranians bypassed the ban through proxies.

At the same time, the conservatives asked Iranians to join local messaging apps while rejecting various reports about Iranians being distrustful of such tools.

Abolhassan Firouzabadi, secretary of the Supreme Council of Cyberspace, noted on Sept. 17 that Iranian usage of Telegram had decreased by 27% and that 30% of users had left the app.

Despite claims by the judiciary and conservative officials, reports indicate that the ban has not produced the desired results. According to one report, Iranian users operate Psiphon, a tool for circumventing the blocking, 2.2 million times per hour.

Meanwhile, a study conducted by the Intelligent System for Collection of the News of Persian Channels, a research center affiliated with the University of Tehran, argues that since the Telegram ban, visits to Persian-language channels on the app increased after a short period of decline. The study, published May 18, shows that, after the ban was imposed on April 30, daily visits of Iranian channels significantly decreased to 850 million from 2.4 billion on April 19. However, this trend reversed after May 13, with such channels getting 1.6 billion daily visits on May 17.

The conservatives’ endeavor to persuade Iranians to join local messaging apps has also seemingly failed. According to an Oct. 13 survey by ISPA, a polling institute affiliated with the semi-official ISNA news agency, more than 47% of Iranians still use Telegram, while the number of people sticking with local versions of the app has sharply declined.

Based on the survey results, the local messaging app Soroush — used by about 2% of Iranians in the month of April, prior to the ban on Telegram — peaked at 13.5% of the population in May, but fell to 4.3% in October. Moreover, another local app, ITA, has seen users drop from 2.9% of Iranians prior to the Telegram ban to 0.9%.

Before the ban of Telegram, hard-liners and conservative news agencies had used the platform to put out newsfeeds. After the ban, those same outlets left the app and tried to persuade Iranians to adopt local versions of it.

Conservative and hard-line outlets used to be influential on Telegram, especially Fars News Agency. Because of their influence on Telegram, conservatives believed their departure from the app would prompt many Iranians to switch to local messaging apps where they had set up channels. However, the abovementioned figures show that the hard-liners were wrong and that their rivals, namely moderates and Reformists, won, as they were the only popular currents remaining on Telegram.

Now, seven months after the ban, hard-line media outlets, including Fars and Tasnim News Agency, have returned to Telegram. This can be interpreted as a complete failure of the ban. Perhaps most importantly it means that hard-liners are giving in to the realities of Iranian society.

As recently as Nov. 10, Payam Tirandaz, the general director of Fars News Agency, said, "Despite all the threats, media should be able to use all the legal potentials to communicate with its audience and play a more active role in enlightening [public opinion], where public space is filled with rumors. … Thus Fars News Agency will continue its activities on all the legal messaging applications, including Hot Gram and Telegram Talai, which have more than 30 million users."

After the ban on Telegram, the two apps Hot Gram and Telegram Talai (Golden Telegram) launched operations. The apps appear to be clones of Telegram, though they block access to a number of news channels. The launch of these apps also played a large role in people remaining on Telegram. They have been under fire from hard-liners who blame the government for the failure of the Telegram ban. In fact, the hard-liners and the judiciary believe that these two apps are "local proxies" backed by the Rouhani-controlled Ministry of Information and Communications Technology (ICT). Indeed, ICT Minister Mohammad Javad Azari Jahromi has responded to these criticisms by sarcasticall​y saying that "victory is not achieved by blocking."

All in all, the best explanation for why the hard-liners returned to Telegram comes from senior hard-line parliamentarian Mohammad Ali Pourmokhtar: "I consider the return of Principlist [conservative] media to Telegram justifiable. They should be present and respond and prevent the cultural attacks. We don’t want to leave whatever number of users on Telegram alone to be subjected to the poisoned propaganda of the enemy, and for the enemy to turn them against the Revolution and the political establishment.” He added on Nov. 19, “Therefore, the presence of revolutionary forces [on Telegram] is necessary. We shouldn’t leave the scene to the opposition forces."