From Israeli prime minister to prisoner

The Israeli democratic system that was able to sentence former Prime Minister Ehud Olmert to jail time might have lost its power to check the actions of today's serving prime minister. 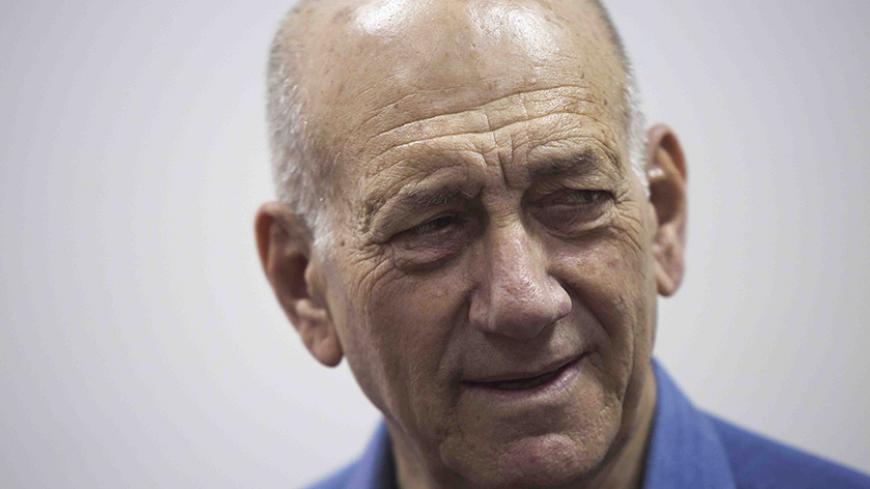 Ehud Olmert, Israel’s prime minister from 2006 to 2009, has reported to jail, where he will become a run-of-the-mill prisoner. Olmert, 70, will spend 19 months behind bars, serving a sentence for corruption for his involvement in a bribery scandal that occurred while he was mayor of Jerusalem.

In the brief history of the Jewish state, nothing like this has ever happened before at the prime minister level. In 2011, Israel’s eighth president (2000-2007), Moshe Katsav, was sentenced to seven years in prison for aggravated sexual assault, a sentence he is currently serving. Before that, former Finance Minister Avraham Hirschson was sent to prison in 2009 for white-collar crimes. But never before has an Israeli prime minister been sent to prison. In Israel, the prime minister is the equivalent of the American president. He is the leader; he is the captain, the Israeli version of the “commander-in-chief.” And now he is going to jail.

Apart from the legal precedent and aside from all the tragedies — personal, familial and national — the situation is also a logistical nightmare. As a former prime minister, the Shin Bet’s VIP Security Unit provides Olmert with a security detail 24/7, no matter where he goes. He travels in a government limo and his home and office are under constant protection because Olmert is considered one of Israel’s “emblems of government” who requires round-the-clock security. The reason for that is simple: Olmert knows state secrets. He knows everyone and everything. Some of the most intricate and important classified military decisions were made personally by him. Someone like him would be a treasure trove of information for terrorist groups or foreign intelligence agencies. How can such a person be sent to prison?

The first question raised was what would happen with his security once he begins his sentence. Will the former prime minister bring his security detail to prison with him? Since Israel has never faced this kind of dilemma before, the prison service and the Shin Bet were forced to ponder the problem in depth before coming up with a special protocol to handle the logistics. It was decided that the VIP Security Unit will remain outside the prison walls, only joining Olmert in the event that he leaves the prison on furlough. Within the prison itself, he will be protected by a team of security guards who received special training under Shin Bet supervision. It isn’t every day that a prime minister becomes an ordinary prisoner, so the system must get used to dealing with this bizarre situation.

Another question raised was whether Olmert would be allowed to serve his sentence with other prisoners. The authorities came up with a creative solution here. A new wing, “Division 10,” was created in the minimum-security Maasiyahu Prison. Olmert will be kept in a cell designed for three prisoners in an isolated wing that will house only white-collar criminals, traffic offenders and other inmates convicted of bribery. Prisoners who will be in contact with him will be screened first. The prime minister’s cell will be covered by security cameras, which will keep track of everything happening there 24/7, and a special sentry will be posted by the door. Olmert will not come into contact with any unvetted prisoners, out of fear that they might attack him or attempt to extort him.

The big problem is how he will pass the time, as he will not be able to work like other prisoners. As of now, he is sentenced to 19 months, which is considerable, but there is certainly a chance that this time will be increased once the appeals process in other scandals in which Olmert has been convicted eventually ends. Olmert’s sentence could grow by many more months.

It is hard to believe that this is the very man who won an election less than a decade ago and served as the prime minister of Israel for almost three years. The rise and fall of Olmert could be the basis of a Greek tragedy or a Latin American telenovela. He reached the pinnacle of power in a historical twist of fate, after Prime Minister Ariel Sharon suffered a debilitating stroke in January 2006. Olmert, who was then the deputy prime minister, benefited from the sudden lack of leadership. After winning the election, he led Israel through the Second Lebanon War (2006) and Operation Cast Lead in Gaza (2008-2009). According to foreign sources, during Olmert’s tenure, Israel also bombed the nuclear reactor that the Mossad allegedly uncovered in Deir ez-Zor, Syria, effectively eliminating President Bashar al-Assad’s top-secret nuclear ambitions in a matter of minutes in a smooth operation that went completely under the radar (2007). The ongoing civil war in Syria erupted three years later.

As far as Olmert is concerned, he would prefer to go down in history not as someone who went to war, but as the person who went farther than anyone in the history of modern Israel to reach peace with the Palestinians. During his final year in power, Olmert held a long series of personal, intimate meetings with Palestinian President Mahmoud Abbas. These concluded with Olmert presenting Abbas with a written proposal, which expressed his readiness to give up almost all (94%) of the West Bank so that a Palestinian state could be formed. The proposal included the transfer of Jerusalem neighborhoods to the Palestinians and a creative solution to the problem of the right of return. No other Israeli leader had ever made such a far-reaching proposal to a Palestinian leader. When Olmert informed US Secretary of State Condoleezza Rice about the details of his offer, she was visibly moved by it. In fact, she could hardly believe what she was hearing. Rice devoted an entire chapter to the issue in her book “No Higher Honor,” claiming that Olmert went even further and risked more than late Prime Minister Yitzhak Rabin.

Ultimately, Abbas did not even reply to Olmert’s proposal, just as he did not respond to a proposal he received from President Barack Obama in the White House on March 17, 2014. Olmert eventually did not survive politically, but for entirely different reasons. Today, he has his own intriguing conspiracy theory about what actually happened next, claiming that his willingness to go so far unleashed great and powerful forces that financed a long campaign to depose him.

Olmert’s legal struggle to prove his innocence dragged on for years before it ended in his excruciating fall. His final appeal was accepted in part by the Supreme Court, which reduced his original six-year sentence to just a year and a half in prison. And yet, regardless of all that, as of today, Olmert will go from being a free citizen, a former prime minister and a respected Israeli public figure to a prisoner serving his sentence.

There are those who believe that putting an Israeli prime minister behind bars testifies to the resilience of Israel’s democracy. They say that it is evidence that Israel still has an independent judiciary and law enforcement system. The problem is that much has changed in Israel ever since the authorities went after Olmert. Today’s circumstances are completely different from those in which the police could investigate the prime minister fearlessly and without bias.