Will Sudan side with Egypt in Renaissance Dam dispute?

Ambassador Mohamed Orabi, chairman of the parliamentary Foreign Relations Committee, speaks about the disputed Halayeb and Shalateen regions and the Renaissance Dam. 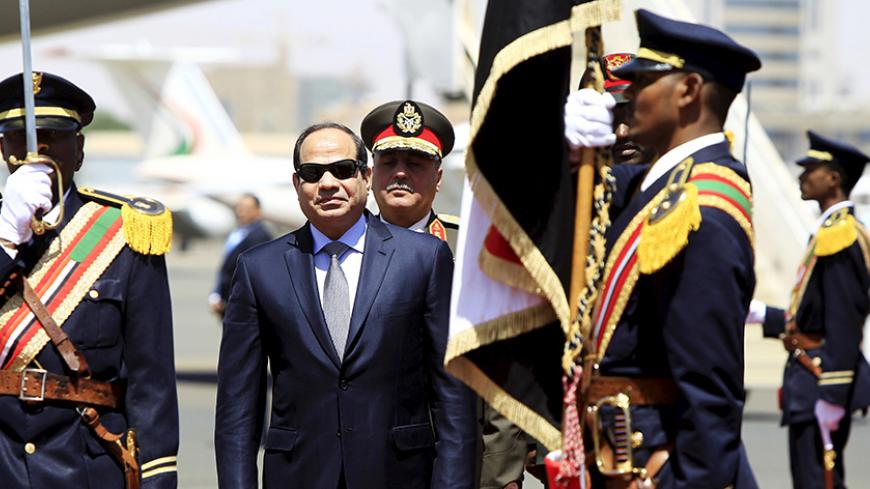 Egyptian President Abdel Fattah al-Sisi (C) inspects a guard of honor upon his arrival at Khartoum Airport, ahead of a signing ceremony of an Agreement on Declaration of Principles between Sudan, Egypt and Ethiopia on the Grand Ethiopian Renaissance Dam Project, in Khartoum, March 23, 2015. - REUTERS/Mohamed Nureldin Abdallah

CAIRO — The Foreign Relations Committee in the Egyptian parliament is meant to represent the voice of the Egyptian people in the international sphere, rather than just the government’s official stance. It is in charge of several files such as the Renaissance Dam and the crisis over the disputed areas of Halayeb and Shalateen, among other issues. Al-Monitor spoke with Ambassador Mohamed Orabi, the interim chairman of the Foreign Relations Committee in the Egyptian parliament, former foreign affairs minister and a leader in the Support Egypt coalition, asking him about the most important laws submitted to the committee and its future role in Egypt’s foreign relations.

Al-Monitor:  As chairman of the Foreign Relations Committee in the Egyptian parliament, what do you think are the most important laws that were discussed by this committee?

Orabi:  The most important laws approved by the committee are the law on the extradition of prisoners between Egypt and other countries, the law on the recovery of smuggled funds and the National Defense Council law.

Al-Monitor:  Why did the law on the recovery of smuggled funds stir a debate within the Foreign Relations Committee?

Orabi:  According to the law, the committee formed to recover smuggled funds must submit a detailed report on its activities every three months, but this did not happen, which sparked a debate within the Foreign Relations Committee. Ultimately, we approved the law, taking into account the need to amend it later to include a representative of the Foreign Relations Committee within the members of the smuggled funds recovery committee in order to closely follow up on the details of the recovery of looted funds.

Al-Monitor:  What is your estimate of the amount of the funds smuggled abroad by the symbols and figures of President Hosni Mubarak's regime?

Orabi:  We don’t have an exact figure for the amount of the funds smuggled abroad, but surely they are not as huge as the amounts claimed by the media.

Al-Monitor:  Over five years have passed since the January 25 Revolution, yet the state has yet to make any progress in recovering these funds. Why is that?

Orabi:  Five years is not enough to recover the looted funds, in light of the recovery procedures applied by the states to which these funds have been smuggled. Eventually, we will achieve a result. Time is not the main hurdle in this issue, but rather the difficult legal procedures [are]. These states require judicial rulings concerning the smuggled funds, and this is a difficult condition. A judicial ruling issued against the owner of these [smuggled] funds would be enough, but these are the rules on the recovery of funds in these states.

Al-Monitor:  What will be the role of the parliament, represented by the Foreign Relations Committee, in the Renaissance Dam crisis?

Orabi:  The committee will hear from the foreign minister and the minister of water resources and irrigation on the latest developments in the Renaissance Dam crisis, but it will not impede the work of the official negotiator. The cooperation between the parliament and the government in this issue would give Egypt leverage at the negotiating table and serve as a pressure card to be used against the other negotiating party. We will opt for this approach unless Ethiopia proves to have ill intentions. Overall, things are going slowly but in the right direction.

Al-Monitor:  You have said that the Renaissance Dam crisis is a matter concerning Egyptian diplomacy. Yet has the intensification of the crisis moved it beyond the diplomatic scope?

Orabi:  The Renaissance Dam crisis is a diplomatic issue and not only a technical issue. It is also a political issue related to national security.

Al-Monitor:  You visited Sudan in late January as the head of a parliamentary popular delegation. What were the outcomes of this visit?

Orabi: The [positive] outcomes of the visit were reflected in the statements of the Sudanese parliament speaker, who confirmed that the Egyptian popular delegation visit brought back the heat to the close relationship between the two countries to achieve their mutual interests.

Al-Monitor:  Sudan's President Omar al-Bashir said the [disputed] Halayeb and Shalateen regions are Sudanese territory. Will the dispute over these regions affect Sudan's position on the Renaissance Dam?

Orabi:  I think this is unlikely. We strongly believe that Halayeb and Shalateen are 100% Egyptian. Sudan will not use the Renaissance Dam card to pressure Egypt to cede these regions, since both countries wish to consolidate their relations.

Al-Monitor:  Will there be coordination between the Egyptian and Sudanese parliaments on the Renaissance Dam crisis?

Al-Monitor:  What about the endeavors you talked about to form an Egyptian delegation to visit Ethiopia?

Orabi:  There is nothing new. We will start forming the delegation after the end of the second round of official negotiations on the Renaissance Dam, following President [Abdel Fattah al-] Sisi’s visit to Ethiopia, and after the formation of the parliamentary committees.

Al-Monitor:  As a leading figure in the Support Egypt coalition, how do you respond to the allegations that the coalition is a pro-state coalition that will always support the government and president Sisi?

Orabi:  This is not true. The practice in the parliament confirms the contrary and demonstrates the independence of the coalition.

Al-Monitor:  The parliament rejected the civil service law, despite its approval by Support Egypt. Does this indicate the coalition’s failure to become the majority in the parliament?

Orabi:  On the contrary, this is the biggest proof of democracy and difference of opinions among the coalition-affiliated parliamentarians, and this is a very good sign.

Al-Monitor:  You stated that Support Egypt is inclined to give confidence to the government. Why did the coalition adopt this stance before the government even presents its program to the parliament?

Orabi:  We will wait for the government's policy statement. Theoretically, I support this government with some minor ministerial amendments aimed to achieve stability. We do not have the luxury to form other governments.