Why Egypt's doctors are losing their patience 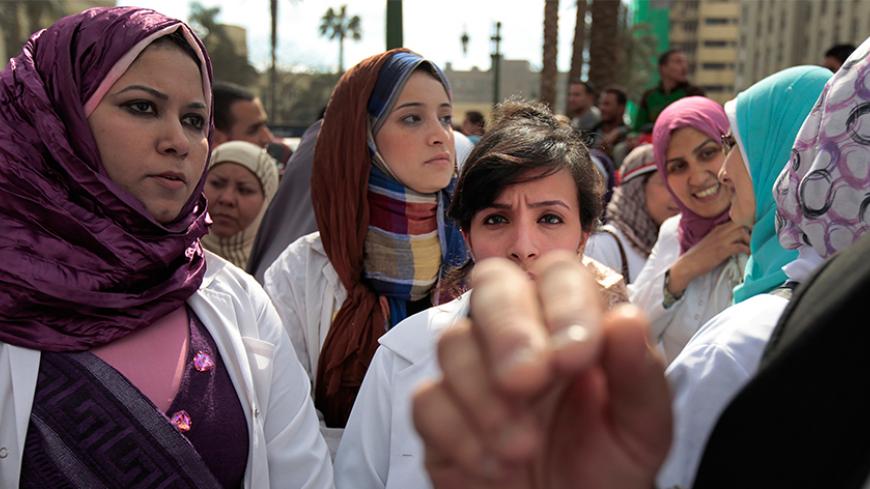 CAIRO — In a rare escalation of events, a police assault on doctors in Cairo’s Matariya hospital in early February provoked the Egyptian Medical Syndicate into holding an emergency general assembly on Feb. 12, which resolved to offer free medical services and close all outpatient clinics in all public hospitals across the nation. The doctors’ union also demanded the referral of Health Minister Dr. Ahmad Imad to the syndicate’s disciplinary committee before revoking his license following a statement in which he claimed that a large number of physicians are not fit for medical practice.

In an interview with Al-Monitor, Dr. Ehab Taher, the syndicate's secretary, said, “The emergency general assembly faced many difficulties to even hold its meeting after many hotels and other venues refused to host the general assembly. This left us with the only option of holding it at the syndicate’s small building on Cairo’s Qasr al-Ayni street.”

Taher added, “The syndicate was able to manage the smallness of the place by dividing the seats assigned to the general assembly’s doctors and their supporters from other independent syndicates into 14 areas, and connecting them via a videoconferencing network that included the main conference hall and the syndicate’s council hall, as well as the streets and gardens annexed to the building. Other participants were provided with a seatless standing area outside the building.”

Taher also said that the syndicate adopted a number of security measures and assigned some of the syndicate’s members tasks such as examining every banner before entering the building and rejecting political and offensive ones, checking doctors’ membership cards and inspecting bags. The syndicate also hired a trained camera team to record what happened in the event of any potential clashes or complications.

Taher said that the doctors decided to hold a general assembly after the prosecution ordered the release of the police officers responsible for the attack on doctors in Matariya hospital. Taher added that the syndicate did not do this just because of the Matariya hospital incident, but because the abuse of hospitals and medical teams has become a daily routine. He said hospitals have turned into a battlefield, and a doctor who has taken oaths to offer proper care to every patient has to stand there while the patient is beaten to death by the baltagiya (thugs).

Taher explained, “All patients, doctors and medical teams at hospitals are no longer safe, and what is worse is that abuses are committed by the same people responsible for security, i.e., police officers. In the Matariya hospital case, two officers came to the hospital when one of them had a forehead cut that only required two stitches. The doctor reassured the patient and described the injury with the word “simple.” That word was enough to enrage the officers, who then beat up the doctors, restrained them on the ground, put shoes on their heads and called their colleagues at the Matariya police department. After that, nine other officers arrived and continued the insults and beating.”

“The doctors were arrested and interrogated at the Matariya police department, where they were offered a compromise: Either they withdraw their allegations against the police officers or they get framed with false accusations and held in custody for four days pending an investigation. The doctors opted for the first choice for fear of being held in prison with criminals who would of course try to court the police officers,” Taher continued.

Taher added, “One of the police officers involved in the case went on air during the 10 p.m. show [Barnamaj al-A’shira] broadcast on Dream TV. He addressed one of the eyewitnesses in the incident with an explicit threat, saying, ‘You have children, may God bless them,’ which means that we are now living in a jungle and we must take action.”

Meanwhile, the treasurer of the Cairo Medical Syndicate, Dr. Ahmad Fathi, said, “The repercussions of Matariya hospital incident were widely felt by civil society and many other syndicates expressed their solidarity, such as the Syndicate of Medical Practitioners and many other workers’ unions, the Pharmacists Syndicate and independent syndicates. We refuse to politicize the issue and we will prove that no one is above the law.”

In his interview with Al-Monitor, Fathi added, “The [national] medical syndicate managed the crisis beginning with its outbreak and refused to give in from the day the assault was perpetrated until the day the general assembly was held. Now the ball is in the general assembly’s court, and its decisions are binding for everyone, including the syndicate.” Fathi said doctors are seeking the following: “The general assembly decided that upon any future assault on doctors at work, a complaint would be filed for the doctor against the perpetrator on behalf of the Health Ministry, which would handle the case and all its expenses, not the doctor. Any hospital director or head of department who failed to comply would immediately be referred to the disciplinary committee within the syndicate. The general assembly also voted for security cameras to be installed in all hospitals and for the admission of any armed individual to the hospital to be refused.”

Fathi spoke of the possibility of staging protests inside hospitals March 5 if the medical syndicate’s demands are not met, especially those related to securing hospitals and taking legal action against the police officers who assaulted doctors at Matariya teaching hospital.

In turn, Gen. Ahmad Jad Mansour, assistant minister of interior and former president of the police academy, said that any talk about violations by police requires accurate data about the number of policemen and of violations. He told Al-Monitor, “The violations monitored by the regulatory agencies of the ministry are very limited, and are strictly dealt with. Financial and administrative corruption is found everywhere in Egyptian ministries, but those working at the Interior Ministry are demonized, whereas the rest are portrayed as angels.”

Mansour expressed his indignation toward the media's use of the terms arrests, torture and enforced disappearance. For Mansour, those terms aim to enrage citizens and rally social media once again against the Interior Ministry. He indicated that this serves goals other than justice, and seeks to destroy the state after the new phase of development was launched. Mansour said, “Following the January 25 Revolution, human rights are now a subject taught to police cadets in their first year. We also added books about police ethics and highlighted the respect of human rights at police departments. We’ve even established an actual police department within the academy, and cadets were engaged in role play so that they can relate to the defendant.”