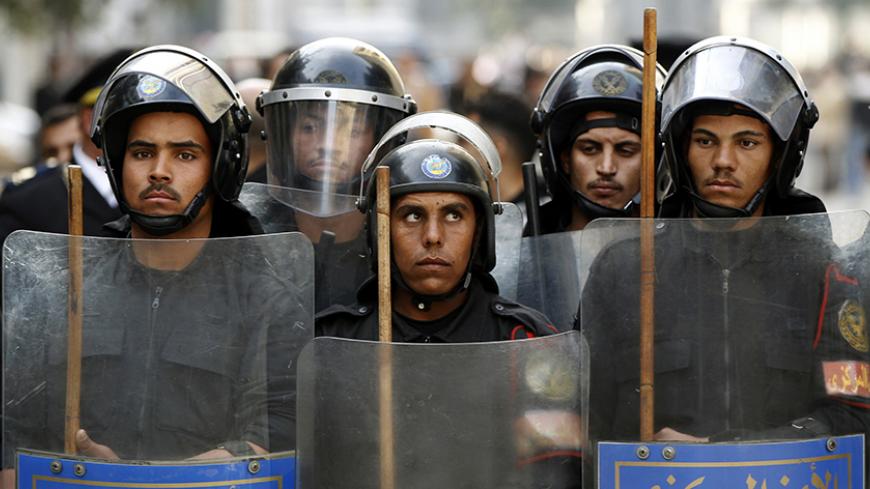 CAIRO — After several incidents of police brutality this year, the public and politicians are calling for amendments to laws governing police authority and behavior. They are also calling for military trials of police officers — something that was abolished in 2011.

Some of the incidents spurring public protests include the Feb. 18 shooting of taxi driver Mohammed Adel Ismail by a police officer after an argument over the fare, the assault on doctors at Matariya hospital the week before and the harassment of a woman in the Cairo metro earlier this year.

People from Cairo's al-Darb al-Ahmar district gathered last month in front of the city's security directorate to protest. Soon after, seven officers from the Coalition of Low-Ranking Police Officers were arrested as they were preparing to appear on television to discuss the situation. The officers were charged with incitement to actions that would harm their service, taking part in an illegal organization aiming to disrupt the police force, calling for a strike and obstructing the work of a public institution.

These accusations raised indignation among some police officers, who blocked a road facing the Egyptian Media Production City on Feb. 21. Their protest sparked officer Ahmad Mustapha, general coordinator of the police union, to address the issue in an interview with Al-Monitor, saying, “Policemen are at the core of the Interior Ministry, for there are nine times as many policemen as high-ranking officers. Recently, a systematic campaign was launched against [policemen] over alleged violations.”

Mustapha added, “Violations are common at any workplace. Therefore, as a police association, we admit they exist and we are working to reduce them. But we cannot stop them for good because they are found everywhere around the world.”

He claimed that making generalizations and assuming all officers are guilty, as well as the state media's use of phrases such as “the state of police officers,” demoralize police, “which in turn will reflect on the Interior Ministry’s performance.”

“Why is the spotlight always on the Interior Ministry’s low-ranking officers?” he asked. “Are high-ranking officers not involved in violations as well? The shooting of the taxi driver in al-Darb al-Ahmar was the result of an altercation that could have broken out between any two people on the street, and it did not take place at a police station nor did this citizen die under torture.”

The police union also questioned the Interior Ministry about some police officers who were detained by the national security, Mustapha said. The union was told the detainees were being held on an old arrest warrant for protesting and that they would be referred for prosecution. Mustapha said the union is waiting for the verdict and is ready to provide support for those involved.

Police union spokesman Hasan Shindi told Al-Monitor, “Military trials of individuals were not abolished by legislation, but an adjudication issued by the Constitutional Court … deemed the military trial of individuals illegal because the police force is a civil institution. The talk about reinstituting military trials reveals a misinterpretation of the law because such action requires a constitutional amendment that would turn the police service into a military institution.”

According to Shindi, if the police force would indeed become a military institution, officers would have no objections to military trials, since military status is an honor and members of the military enjoy many privileges the police service does not. A change in status would also guarantee that any case involving aggression against police officers would be referred to the military court as well.

Shindi added, “The proposed amendments to the police law bear ill will and are not based on logic, because police associations were the outcome of fair and free elections in which 350,000 individuals took part under the [Interior] Ministry's supervision, with the government allocating 5 million Egyptian pounds [$625,000] to this end. So how will these unions be suspended without prior notice?”

Gen. Ahmad Jad Mansour, assistant interior minister and former president of the police academy, told Al-Monitor, “Military trials were replaced by disciplinary committees with powers and penalties up to dismissal. We also introduced some amendments to the disciplinary system in a way that satisfies police members and allows for more discipline.”

Parliament member Col. Ehab Abdul-Azim noted that if parliament receives a draft law, deputies will examine it and amend it as necessary to guarantee discipline within the police service.

Mohamed Anwar Esmat al-Sadat, another parliament member, spoke to Al-Monitor about the issue. “The [Interior] Ministry sent its recommendations to the parliament, but they were neither distributed nor discussed. Legislation alone is not enough to monitor the performance of high-ranking and low-ranking officers, and the respect of human rights and freedoms. There should be laws with the purpose of protecting citizens against violations, according to the constitution,” he said.

“There should not be any coalitions within the police force, as these coalitions would hinder discipline within it. Moreover, police officers should not object to the suspension of their special groups just because they are elected."

Sadat also stressed the need to change police ideology, so officers know that if they are repeat offenders, they can be forced to retire. Furthermore, he said officers should not serve at the same station for many years, which allows them to accumulate influence and become strongmen. There must be periodic rotations in the months of August and January, as is the case with high-ranking officers.