Egypt seeks to crack down on killings by police

New amendments to Egypt’s police law seek to make it tougher for police to abuse their authority. 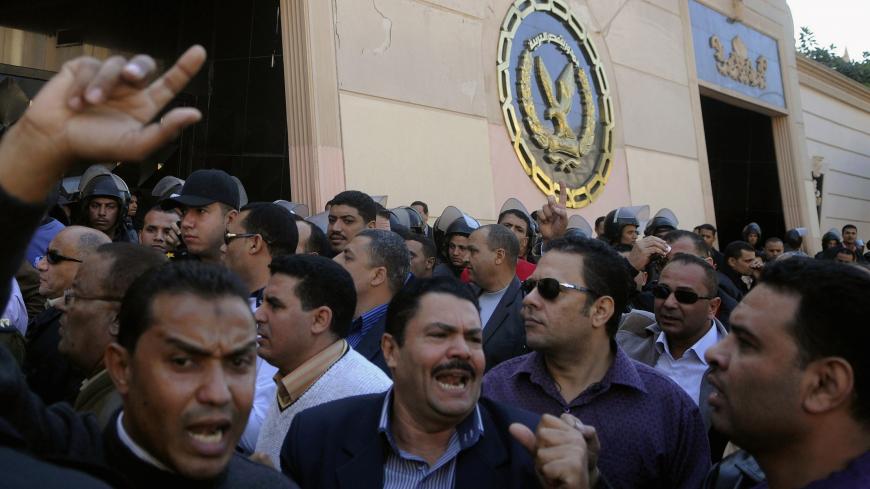 Egyptian police officers shout slogans as they take part in a protest outside the Interior Ministry in Cairo, Dec. 8, 2013. The police officers were demanding an increase in salary and promotions. - REUTERS

The involvement of Egyptian police officers in three murder cases in 2016 — in addition to a long list of accusations of bribery, verbal and physical abuse and harassment — have people comparing the current regime to that of ousted President Hosni Mubarak.

Police excesses during Mubarak’s rule contributed to his overthrow and to Egypt’s Arab Spring in 2011.

The current government, in response to the accusations, is taking steps to battle the problem. In late August, the police law was amended to remove government-issued firearms from the hands of some officers.

The law covers several areas. It prohibits the use of force or using firearms in any circumstances other than those prescribed by law. It requires police to turn in government-issued firearms at the end of their shifts — though exceptions can be made in situations when the Criminal Investigation Unit director believes it’s in the public interest. The law also forbids improper or excessive use of authority.

Violations can result in interrogation and transfer, disciplinary hearings, and delays in promotions, special allowances and raises. In some cases, police officers can be fired.

As the amendments to the law went into effect, some police officers demonstrated Aug. 23. They assembled to protest changes to their shifts and new punishments.

But the amendments also prohibit police from forming coalitions or participating in protests and sit-ins.

Ahmad Mostafa, the head of the Coalition of Police Officers, reportedly was remanded to a disciplinary hearing Sept. 1 for establishing the coalition, according to Al-Yawm Al-Jadid newspaper, which cited a security source.

On Oct. 3, coalition spokesman Mahmud Subhi was arrested on charges of incitement against the Ministry of Interior.

These events all occurred roughly in parallel with a trial in Al-Matariyyah Court of Misdemeanors. On Sept. 20, nine police officers were sentenced to three years in prison for assaulting doctors at the Al-Matariyyah hospital Jan. 28. This was just one of the cases that inflamed public opinion at the time.

In addition to public criticism, the Interior Ministry’s attempts to diminish the influence of police might also stem from a police rebellion in August 2015 that required the government to call in security forces. The rebellion was led by the coalition and directed against the ministry. Police demonstrators in Al-Sharqiya stormed the local police department and staged a sit-in to protest their salaries and special allowances.

Al-Monitor spoke with human rights activists and security experts to answer the question: Can the new amendments curb the impact of police violations?

As’ad Haykal, the president of the Egyptian Center for Legal Studies, told Al-Monitor the amendments are satisfactory, but the issue hinges on the seriousness of their influence. “The Interior Ministry must establish an independent, technocratic office specializing in this area, a body empowered to investigate violations as well as citizens’ complaints against members of the police.”

The question of when and whether to investigate violations should not be “based on the whim of the police officer’s immediate superior, who might be biased in favor of his subordinate. Rather, it [must be] the same system that judicial institutions use to exercise oversight over judges,” Haykal said.

Karim Abd al-Radim, a lawyer for the Arab Network for Human Rights Information, told Al-Monitor that combating the violations committed by police officers requires real action by real oversight bodies and civil society organizations, as well as the National Council for Human Rights. “Those are the bodies that can play the most critical role in monitoring and oversight. They are capable of revealing corruption and violations. The law alone will not suffice, because every law has loopholes,” he said.

Some people, however, feel the old legislation was sufficient.

“The problem is that the [old] law was not applied. And that’s because the police themselves are the ones charged with enforcing it,” Samih Samir, a lawyer at the Egyptian Center for Economic Rights, told Al-Monitor. “They are charged with protecting the security of the ordinary citizen and with dispensing justice. They are invested with authority for this purpose, and not to serve their interests and personal goals.”

Cairo Center for Human Rights Studies director Muhammad Zari’ agrees with Samir, to a point. He told Al-Monitor that police officers have long behaved as if they are able to deal out exaggerated punishments to ordinary Egyptians with impunity. “The law does not have much of an impact, because the police chief will still be able to perpetrate violations with his firearm while he is still completing his tour of duty. However, the real effect of the move is showing a sincere desire on the part of the ministry to apply the law to them. I believe that this desire has increased, particularly after the pressure exerted by a public that was incensed with the murder cases committed by police officers,” Zari’ said.

Khalid Hammad, a retired brigadier police chief, told Al-Monitor that from a security aspect, the law shows a concern to protect the dignity of everyday citizens and to pressure police officers to perform their duties and put a stop to their violations.

The law was drafted with the input of a variety of specialists, from legal experts who demanded that police officers sign psychological disclosures to security experts who insisted on disarming officers and implementing swifter and more severe punishments of violations.

The other side of the coin is that there were three cases of murdered policemen last month. The first involved a policeman walking out of his home in 6th of October City. The second involved one who was killed in el-Arish in Sinai Peninsula, and in the third case, gunmen opened fire on and killed a policeman as they attempted to rob a CIB bank. However, at this point, it is difficult to draw a link between the cases and the decision to disarm police officers. Available information from the three cases does not indicate whether the policemen still had their government-issued firearms when they were attacked and killed.

Some other provisions of the amendments prohibit police from disclosing operational secrets, speaking to media outlets without the permission of the Interior Ministry, taking possession of or circulating any document concerning work as well as removing any paper from its assigned file.