Iraqi doctors are living under constant threat of death and kidnapping by tribes and gangs seeking to extort them in what some suspect is a plot to empty the country of its scientific assets. 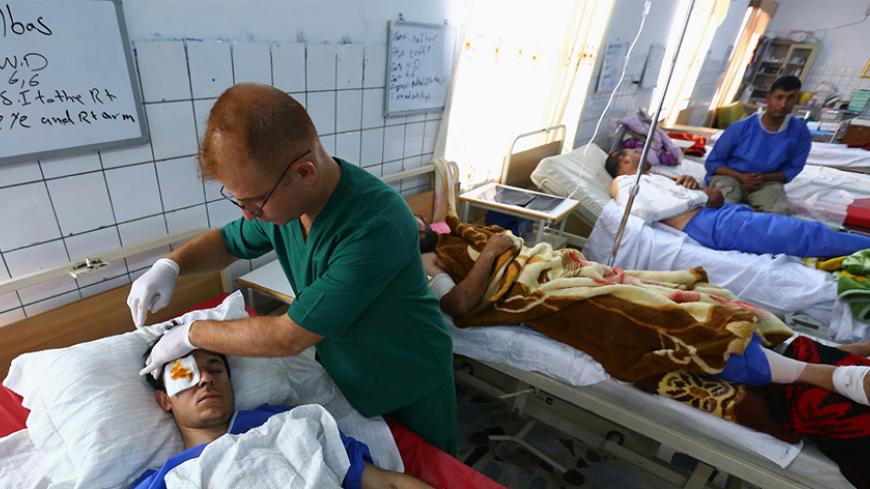 A man injured during a suicide bomb attack in Mosul receives treatment from a doctor, June 6, 2014.

BAGHDAD — Doctors in Iraq are fleeing threats on their lives and extortion attempts, adding even more danger to a country battling the Islamic State (IS). In the news and on social media, pictures are surfacing of doctors' abandoned houses with death threats or demands for blood money scrawled on the walls and doors.

There are dozens of cases of this particular crime each year in Iraqi cities. In fact, in Diyala province, east of Baghdad, the Doctors Syndicate reported July 13 that 140 doctors had left the province in the last few years over repeated threats and assaults. A report published Nov. 16, 2014, by the Iraqi Ministry of Health stated that 10,000 doctors had emigrated from Iraq since 2003.

This phenomenon can be chalked up to the Iraqi reality: Its citizens are under the rule of tribal law and increasingly at the mercy of criminal gangs. Tribes impose their values and laws and may punish doctors for their members' health problems, while gangs blackmail wealthy doctors and corruption continues to rise.

The director of the Husainiya Dental Health Center, Dr. Wasim Khdeir Abbas, was killed in Baghdad Oct. 6. Also in Baghdad, security forces thwarted a June 18 attempt to kidnap a doctor from his clinic. In Basra, a tribe threatened a surgeon Sept. 29 after a patient died during surgery.

Al-Monitor was able to conduct an interview with Dr. Kazem Hussein of Babil. The doctor, a victim of blackmail, said, “Iraqi doctors are receiving some serious threats related to failed surgery or prescriptions that led to the death of the patient. Personally, I paid $20,000 in August 2012 after the family of a patient thought that I was responsible for the deterioration of his medical condition and eventually his death. They believed I had prescribed the wrong medication, which is not true.”

He added, “I sought the intervention of my connections and the friends of the deceased’s family to convince them I was not responsible for his death and that it was only his destiny. We’ve tried to explain that their behavior was wrong and socially unacceptable and contradicts the teachings of Islam, but to no avail. In the end, the issue was settled in a tribal meeting, where I paid blood money. Some people are not aware of the doctor’s limits in treating people, which leads them to accuse him of responsibility for patients' deaths.”

Social researcher Qasem Muhammad, also from Babil, blames what’s happening on “ignorance and the will to extort doctors to obtain money.”

Sheikh Majid Alklipy, a tribal leader, provided Al-Monitor with other examples. In his position in 2014, he “settled three conflicts with doctors, one of which ended with the doctor paying $4,000 in damages to a patient who underwent a failed surgery.”

Author and journalist Jawad al-Shammari believes a political factor is contributing to the doctors' predicament. He told Al-Monitor, “The gangs are operating under a political agenda that targets doctors and academics to empty the country of its scientific assets.”

Shammari gave the example of an Iraqi doctor, whose name he withheld for security reasons. As reported by his friends, someone called the doctor, who works at a Baghdad hospital, and threatened to kill him and kidnap his daughter and wife if he were to disclose information about the bribery and corruption going on in the hospital. “This doctor attempted to flee Iraq, but failed as he was not able to take his family with him,” Shammari added.

The Health Ministry is collaborating with the Interior Ministry to provide a safer environment for doctors. In an August Cabinet meeting, the ministry demanded the enactment of the Doctors Act No. 26 of 2013, which imposes a fine of almost $9,000 and three years in prison on any person who threatens or assaults a doctor.

“The ministry is keen to follow up on the incidents of threatening doctors, and when a video was posted on Facebook in September 2014 showing a person threatening doctors, the ministry called the Doctors Syndicate in Misan to file a lawsuit against him," Rifaq al-Araji, acting spokesman for the Health Ministry, told Al-Monitor.

On Sept. 6, the Iraqi Council of Ministers asked the Higher Judicial Council to take legal action against anyone who attacks a doctor while doing his job.

Salih al-Hasnawi, a member of the Iraqi parliament's Health Committee, told Al-Monitor there are several reasons doctors are targets, including "the people’s lack of awareness about the doctors’ role in society" and armed groups "seeking to destabilize and spread fear."

Particularly during Iraq's war ​against IS, which controls two important cities, Mosul and Ramadi, experts agree that promoting the health sector and preventing more doctors from fleeing the country are essential to supporting the war effort, treating the wounded and restoring the people’s trust in the services provided by the Iraqi health sector.