Egyptian doctors are outraged by authorities’ handling of medical personnel after a number of doctors were arrested and others were criticized. 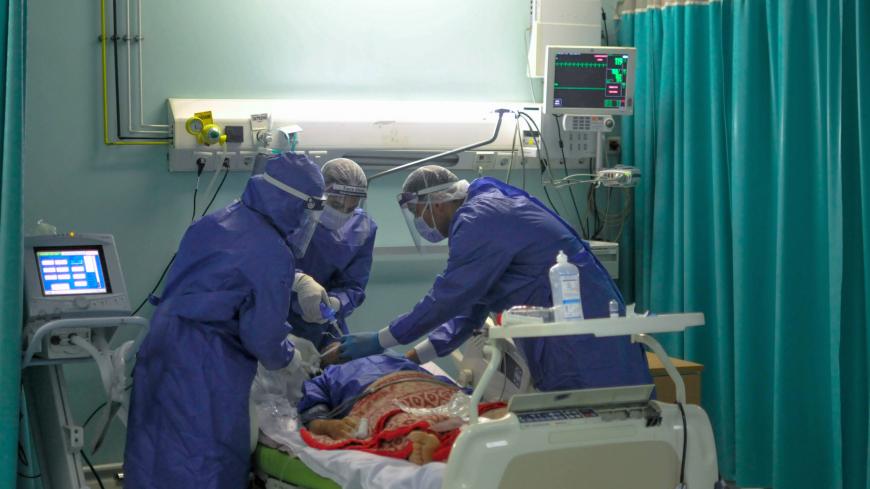 A picture taken by a doctor at the Sheikh Zayed Hospital in the Egyptian capital Cairo on April 29, 2020, shows members of medical staff wearing protective gear, intubating a patient in the isolated ward for coronavirus patients. - YAHYA DIWER/AFP via Getty Images

CAIRO — In what was described by rights advocates as part of a crackdown against Egypt’s medical staff, a doctor in northern Egypt has been remanded in custody for 15 days as of June 27 by the state security prosecution pending further investigation into the charges of misusing social media, spreading false news and being involved in a terrorist organization.

Mohamed Moataz El-Fawal, a university lecturer of radiology and board member of the Sharqiya province syndicate branch, was arrested one day after he voiced his views online about Prime Minister Mustafa Madbouly’s recent remarks on Egypt’s medical personnel.

“Fawal has been accused with the same set of accusations used to terrorize anybody with a free voice,” a medical syndicate board member told Al-Monitor on condition of anonymity.

“The syndicate has taken all the necessary measures to offer him proper defense. But there is nothing else we can do,” he said.

The Egyptian Medical Syndicate addressed the prosecutor-general, calling for Fawal’s release until the investigation is over. The syndicate further said that a doctor should not be penalized for his syndical activities.

The local group Egyptian Front for Human Rights said in a statement June 27 that Fawal was forcibly disappeared for two days prior to interrogation.

“The authorities are seeking to intimidate doctors by such charges to force them to perform their duties under pressure … and, at the same time, refrain from talking publicly about the mismanagement of the public health sector,” human rights lawyer Fahd el-Banna told Al-Monitor.

Once dubbed Egypt’s “white army,” security authorities, state-owned and private media outlets close to the regime turned against medical personnel after the latter had exposed the facts about the state’s incompetence in handling the coronavirus pandemic. They were further nailed and intimidated by authorities.

At least six doctors had earlier been detained after they expressed their concerns on social media about the country’s mismanagement of the crisis.

The doctors were all almost charged with the same charges of Fawal’s, a set of accusations frequently used by the authorities against dissidents.

“This is a state of violation against doctors who have the right to be protected. In case they need to be questioned, only the syndicate can do that,” Banna said.

Meanwhile, on the same day Fawal was arrested, activists and a number of doctors reported on social media outlets that security forces cordoned off the medical syndicate’s building in downtown Cairo, shortly before the board attempted to hold a press conference to discuss several issues about the challenges facing doctors, including Madbouly’s remarks.

It was later announced on the union’s official Facebook page that “the presser was canceled for technical reasons.”

Strife has erupted between medical personnel and the government following controversial statements made by Madbouly June 13 in which he insinuated that some of them fell short of handling COVID-19 cases.

During a televised speech on the latest measures taken by the government amidst the coronavirus pandemic, Madbouly claimed that the absence of some medical staff members from their posts in a number of provinces caused more deaths.

On the same day, the medical syndicate was quick to react to the premiere’s comments, releasing a strongly worded statement that demanded his apology.

According to the union’s statement, Madbouly ignored the actual reasons behind the surge of deaths: the scarcity of capacity at public and isolation hospitals, medical supplies and beds at intensive care units.

“Ever since the pandemic [prevailed] in Egypt, doctors have shown the greatest examples of sacrifice at work, under huge pressure from these difficult circumstances, a lack of personal protective equipment at some hospitals in addition to the ongoing attacks on medical personnel by the patients’ [frustrated] families,” the statement read.

“We call on the prime minister to check the lists of doctors’ deaths since the … pandemic first appeared in Egypt. The number of doctors who have been martyred reached 100, while over 3,000 contracted the virus,” the syndicate said.

In an attempt to retract Madbouly’s accusations a few hours after his speech, official Cabinet Spokesman Nader Saad told state TV that the prime minister did not mean to generalize, saying that a few members of the medical personnel were irresponsible, which resulted in a deficiency in medical service provision.

"No single press conference [on the pandemic] was void of words of praise … the premiere [just] talked about exceptional occurrences that do not influence the [reputation] of Egypt’s doctors,” Saad told talk show host Wael el-Ebrashy in a telephone interview, adding that there were two incidents currently being investigated.

Nevertheless, an online campaign was launched on social media by activists and medical professionals who released pictures of themselves and their colleagues at isolation hospitals, some with sarcastic comments about them being "layabouts.” The #supportEgypt’sdoctors hashtag has been trending for days on Twitter.

Preventative medicine Dr. Hekmat Mahmoud posted on Twitter a picture of her colleagues: “Those are the doctors of Zagazig University Hospital who donated their blood when they found the blood bank empty, collecting 74 cases … #supportEgypt’sdoctors."

“A layabout doctor who caused the death of patients … lost his eyesight because he believed in his role,” Nevo Gamal tweeted, in reference to Mahmoud Samy, a doctor who lost his eyesight while treating coronavirus cases due to extremely high blood pressure resulting from exhaustion and overwork.

Celebrities and politicians reacted as well.

Actress Menna Shalaby tweeted: “Thank you, Egypt’s doctors. You are in [our hearts]. May God bless those who [aided] us with their pure souls. May God protect those who are [still] alive.”

Aboelela Mady, head of Wasat, a moderate Islamist political party, tweeted: “Thanks to Egypt’s doctors (men and women), you and all medical personnel. We won’t be able to thank you enough for the extraordinary efforts you exerted in combating the novel coronavirus. Many of you even lost their lives amidst this sacred mission … don’t pay attention to those who don’t appreciate your worth.”

Later in the same week, notorious lawyer Samir Sabry filed a complaint June 25 before the prosecutor general and the state security prosecution against medical syndicate president Hussein Khairy, accusing him of inciting doctors not to perform their duties.

The complaint was followed a few days later by a similar one presented by a journalist working at a state-owned newspaper and two unknown lawyers against Khairy and the Cairo branch syndicate head Shereen Ghallab.

Banna believes such action is illegal.

“Those who file complaints like these are fame-seekers. They have no business filing them. Only a government representative or a patient’s family can legally do that,” Banna told Al-Monitor.

Later on, Egyptian President Abdel-Fattah al-Sisi seemed to have been trying to ease the ongoing tension.

“The Egyptian people have the right to be proud of the sacrifices of its loyal citizens of the medical staff and those in charge of the health care system in the country for controlling the coronavirus and containing its consequences,” Sisi said during a brief speech June 29 commemorating what the regime and its supporters describe as the June 30 revolution.