Who's behind vote to label Muslim Brotherhood a terror group?

After the House Judiciary panel voted along party lines to force a State Department ruling, opinions remain split over the true motivation behind the step. 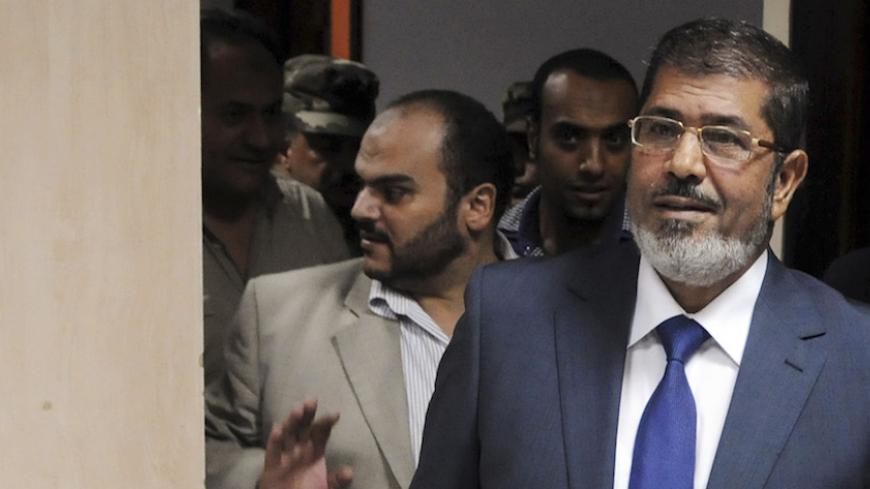 On June 24, 2012, Egyptian President-elect Mohammed Morsi (R) of the Muslim Brotherhood arrives at the Egyptian Television headquarters for his first televised address to the nation in Cairo. - REUTERS

Republicans say their only motivation for designating the Muslim Brotherhood a terror group is to keep Americans safe.

Critics, however, also suspect a trio of outside influences: Egypt. The United Arab Emirates. Donald Trump.

The House Judiciary Committee voted 17-10 along party lines Feb. 24 to require the State Department to take action against the Islamist group or justify its refusal to. The bill, while it has little to no chance of becoming law, is nevertheless sure to be welcomed by US allies such as Egyptian President Abdel Fattah al-Sisi who have taken flak for their uncompromising stance against the Brotherhood.

"We don't know exactly who is behind this," said Mongi Dhaouadi of the Center for the Study of Islam and Democracy, a Washington think tank that supports working with nonviolent political Islamist groups. "But we definitely think that Sisi's lobbying [for] it, possibly the UAE is behind it."

The tone of the presidential campaign also surely played a role, said Dhaouadi, who attended the markup and thanked Democrats afterward. Republican candidate Ted Cruz, R-Texas, has introduced identical legislation in the Senate.

Donald Trump's electoral success in the Republican presidential primary following his December call to ban Muslims until the government "can figure out what's going on" has revealed many voters' concerns that authorities are in the dark about potential terrorists. A similar anti-Brotherhood bill from now-retired hard-right Rep. Michele Bachmann, R-Minn., went nowhere two years ago, but the committee vote suggests it is now a mainstream Republican position.

The bill's sponsor, Rep. Mario Diaz-Balart, R-Fla., told Al-Monitor that he wasn't directly lobbied by either the UAE or Egypt on the issue. He said the group's record since its founding in Egypt in 1928 was well known and that the Obama administration has had an "overly rosy picture" of the group.

"This is an issue to me that, just knowing their history, seems like a no-brainer," Diaz-Balart said.

The Egyptian and UAE embassies in Washington did not respond to a call for comment. Both governments, however, have made no mystery of their distaste for the US government's relationship with the group in the wake of the Arab Spring revolts against the region's authoritarian rulers.

UAE Ambassador Yousef Al Otaiba is said to have been dismayed by the administration's decision to abandon longtime ally Hosni Mubarak and the subsequent rise of the Muslim Brotherhood, which he sees as an existential threat to the Gulf monarchies, according to a lengthy profile in the Huffington Post. The UAE designated the organization as a terrorist group in late 2014.

Sisi likewise has been going after the group in full force since he deposed Egypt's democratically elected president, Mohammed Morsi, in 2013 and declared it a terrorist organization later that year. Hundreds of members have been killed and sentenced to death since then.

Dhaouadi said the committee's vote amounts to a "green light" for continued government repression in Egypt.

While Diaz-Balart denied the bill was aimed directly at the situation in Egypt, his office has been in close contact with lobbyists for the Sisi government, emailing and meeting with them at least nine times in the months before he introduced his bill, according to a review of lobbying records by Al-Monitor. The plain text of his bill, whose last six findings all relate to recent Muslim Brotherhood actions in Egypt, also shows that his office was well aware of the Sisi government's concerns and accusations.

The original bill also pointed to terrorist designations by Syria, Russia, Egypt, Saudi Arabia, the UAE and Bahrain to support the United States following suit. The Judiciary Committee stripped out those findings in the version it adopted Feb. 24.

"I'm glad the majority will no longer be citing these countries as a source of our foreign policy approach," said Rep. John Conyers, D-Mich., the top Democrat on the committee. "But we still have a bill that ... plays into [the Islamic State's] hands, picks a fight we don't need and makes us less safe."