Under pressure from Turkey, UN excludes PYD from Syria talks

Turkey has won the battle over the Syrian Kurdish nationalist Democratic Union Party by blackmailing the United States into leaving the group out of the Geneva III talks. 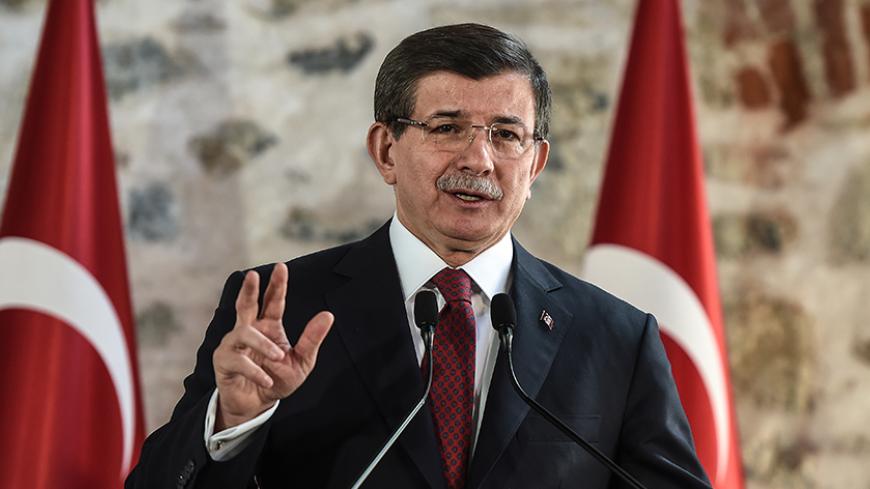 In Brussels, Al-Monitor followed the behind-the-scenes developments regarding the UN-sponsored Geneva III talks on Syria.

Complications arose with the Syrian Kurdish representation as a third party to negotiate with the Damascus regime on ending the war, creating a peaceful political transition, implementing a cease-fire and finding ways to provide humanitarian aid.

The Geneva meetings mark the first step of the Vienna Process initiated by US Secretary of State John Kerry and Russian Foreign Minister Sergey Lavrov, with regional representatives from Turkey, Iran and Saudi Arabia, among others, on board.

One of the thorniest issues had been the composition of the Syrian opposition delegation, whose legitimacy has come under scrutiny.

To try to resolve the thorny issue about the makeup of the opposition delegation, a conference convened in Riyadh in December to form the High Negotiations Committee. The committee includes a number of armed opposition groups, excluding the Islamic State (IS) and Jabhat al-Nusra. Members of the committee range from the US-backed Free Syrian Army (though it is uncertain what remains of that group) to Ahrar al-Sham, the largest Salafist-Islamist organization funded and supported by Saudi Arabia, Turkey and Qatar.

Dubbed the “Riyadh Group,” the High Negotiations Committee is the segment of the Syrian opposition that had been funded, armed and supported by the Sunni axis made up of Saudi Arabia, Turkey and Qatar and endorsed by the United States.

During the Riyadh meeting, the Syrian Kurdish nationalist Democratic Union Party (PYD) convened in Hassakeh province with the “other” Syrian opposition — the secular moderates, in contrast to the sectarian and Islamist nature of the Riyadh group. They formed the Syrian Democratic Council with Arab co-chair and veteran dissident Haytham Manna.

The council's members had provided the ground forces Washington had been relying on in its fight against IS. Raqqa, also known as the IS capital in Syria, was being threatened by the Kurdish-Arab coalition backed by American air cover. Yet it was well-known that around 75% of the Syrian Democratic Council forces are Kurds affiliated with the PYD. According to Turkish leaders, particularly Turkish President Recep Tayyip Erdogan, the PYD is nothing more than an extension of the Kurdistan Workers Party, and therefore a terrorist organization like IS.

As the Geneva III talks near, the PYD — the only reliable ally of the United States against IS in Syria — is being left out of the UN-sponsored meeting, thanks to Ankara’s adamant stand. The Kurds see the group's exclusion as the United States bowing to Turkish blackmail.

That sentiment — that the United States sold out the Kurds — is not completely off-base. I arrived in Brussels on Jan. 25 to attend the European Parliament's annual conference on the Kurds, organized by its leftist party bloc, which includes Nobel laureates Archbishop Desmond Tutu, Shirin Ebadi of Iran and Jose Ramos-Horta of East Timor, as well as controversial American scholar Noam Chomsky.

I was a speaker on a panel with Selahattin Demirtas, Turkey’s popular pro-Kurdish Peoples' Democratic Party (HDP) chairman, and Peter Galbraith, a former American ambassador considered a close friend of the Kurds because of the role he played in the struggles of Iraqi Kurds.

PYD leader Salih Muslim was on the list of speakers for the second day of that conference. But when I arrived in Brussels, I was told Muslim had left for Geneva at the invitation of UN special envoy Staffan de Mistura. He would be back the next day and then would travel again to Geneva for the Geneva III talks, which were set for Jan. 29.

Thanks to my Kurdish sources, who were in constant communication with Muslim, I learned that Galbraith had come to Brussels from Geneva, where he also had met with American officials working on the Geneva III talks. He had been told that the United States was keen on seeing the PYD at the table during the talks.

On Jan. 26, before Muslim was back in Brussels, the news broke: De Mistura had issued invitation letters to the Arab members of the Syrian Democratic Council like Manna. It was assumed that Muslim would be returning to Brussels with his invitation letter in his bag.

Instead, Turkish Foreign Minister Mevlut Cavusoglu, who was in Strasbourg, said Turkey would boycott the Geneva talks if the PYD was involved.

Some hours earlier, Turkish Prime Minister Ahmet Davutoglu, in an interview with CNN's Christiane Amanpour, had said Turkey objected to the PYD’s involvement because it is a terrorist organization, but would not object if it was included in the Syrian government's delegation.

Galbraith was texting with Muslim, who informed him that de Mistura had not issued an official invitation to the PYD.

Manna announced that if their Kurdish allies would not be at the talks, the other members of the Syrian Democratic Council would not be participating, either.

The Kurdish sources in Brussels who were in constant contact with Muslim told me the morning of Jan. 27 that they had just spoken to Muslim, who was at that moment in a meeting with the Americans and that the PYD representation was still pending. He said everything would be clear by noon.

By evening, word came from Washington. US State Department deputy spokesman Mark Toner declared that the PYD will not be invited to Geneva.

Here are some tidbits from the diplomatic farce played in front of the curtain, taken from the transcript of Toner's daily press briefing for Jan. 27:

It is obvious that Ankara won the “diplomatic battle” waged behind the curtains — not only against the PYD, but in a way, also against the United States.

“Boycotting Geneva” has become a very effective blackmail. Somebody asked me, “What if Ankara would not be included in Geneva?”

“The boycott does not mean Ankara would not be attending,” I responded. “It means the High Negotiation Committee, the Syrian opposition supported by Turkey, Saudis and Qataris, would not be in Geneva. That means there would not be a Geneva III.”

The Geneva diplomatic farce has certainly been a win for Ankara. But at what price? The answer will come in the aftermath of Geneva III.