Diplomats fear that Ankara may have decided to play a reactive and obstructive role in the Syrian peace talks, rather than a positive and proactive one. 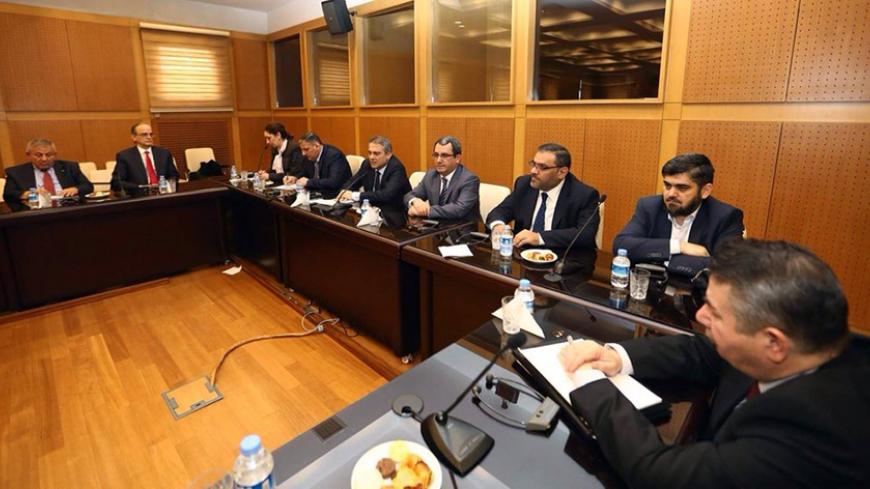 Turkish-supported Syrian opposition groups met in Ankara last week at the request of the Turkish government, reportedly to determine a common position prior to the Feb. 6 talks on Syria in Kazakhstan’s capital, Astana, and the talks to be held under UN auspices scheduled for Feb. 20 in Geneva.

Another aim of the Ankara meeting was to select members of the opposition to be sent to the Geneva talks. Staffan de Mistura, the UN’s special Syrian envoy, had called for these names to be furnished by Feb. 8, failing which he said he would select “as inclusive a delegation as possible.”

Ankara fears that the Syrian Kurds operating under the Democratic Union Party (PYD) may be given some form of representation in Geneva, and it is working hard to prevent this.

Western diplomats monitoring the Ankara meeting are suggesting that this gathering seems to have essentially been an exercise aimed at bolstering Turkey’s position in Syria.

Ankara is alone in seeing the PYD and its military wing, the People’s Protection Units (YPG), as terrorist organizations linked to the outlawed Kurdistan Workers Party.

Ankara was angered last week by the news that the US had supplied the YPG — which is operating under the banner of the Syrian Democratic Forces — with armored personnel carriers after President Donald Trump came to power.

This appeared to dash hopes that the new administration might have a different approach to the Syrian Kurds than the Obama administration. Although Turkish President Recep Tayyip Erdogan did finally have a phone conversation with Trump on Feb. 7, it was unclear exactly what they agreed on.

Those attending the Ankara meeting included Riad Hijab, the head of the High Negotiating Committee; Anas Al-Abdeh, who heads the Syrian National Coalition; members of the Turkmen Assembly; representatives from the Kurdish National Council, which Turkey supports against the PYD; and various members of the armed Syrian resistance, although it was not clear who they represented.

The meeting held at the Turkish Foreign Ministry was hosted by Undersecretary Umit Yalcin. There were no representatives from Saudi Arabia, Qatar or any other country that also supports Syrian groups backed by Ankara.

“Looking at what came out of this meeting, it seems more like an effort by Turkey to steer the opposition against US and Russian plans for Syria, especially where these involve the Kurds, rather than trying to push the Syrian peace effort forward,” a Western diplomat, speaking on condition of anonymity due to his sensitive position, told Al-Monitor.

Ankara is deeply perturbed by Trump's proposal for safe zones in Syria, despite the fact that Turkey has been calling for such a zone in the north of the country for a long time.

Some see Trump's proposal as a prelude to granting the Kurds their own region. Ankara is also displeased by Moscow’s offer of autonomy for the Syrian Kurds under a unified Syria.

Turkey's Islamist Justice and Development Party (AKP) also reacted coldly to the draft constitution for Syria submitted by Moscow at the first Astana meeting, held Jan. 23-24 under the auspices of Turkey, Russia and Iran.

Turkey's ruling party opposes this draft not only because it proposes regional autonomy for various groups in a federated Syria but also because it supports a secular future for the country.

In a recent article for the pro-government daily Yeni Safak, Yasin Aktay, a deputy from the AKP and a foreign policy adviser to the government, wrote that Trump’s “safe zones” proposal brought to mind the possibility of a zone controlled by the PYD. Referring to Russia’s draft constitution, he said this “looked like an attempt to sabotage the positive atmosphere captured in Astana.” Aktay said 90% of Syrians — regardless of their allegiances — would reject the Russian draft. “Topics such as ridding the country of its Islamic character and an autonomous region for the Kurds are very serious matters,” he said, arguing that promoting these would inflame the conflict in Syria.

Although there was no official statement by Turkey after the Ankara meeting, an unnamed Foreign Ministry source told the media that “all participants had pointed out that bringing up the future administrative system of Syria … and attempting to start a discussion on issues such as a new constitution, autonomy or federalism … risk serving the purposes of those who pursue unilateral agendas.”

He added that those pursuing such agendas were doing so “at the expense of the territorial integrity of Syria,” saying these groups should be barred from Syrian peace talks. The official was clearly referring to the PYD/YPG, which Ankara says is trying to use the confusion of the Syrian civil war for its separatist aims.

An opposition source, on the other hand, was quoted in the Turkish press as saying that members of the delegation to attend the Geneva talks had been selected at the Ankara meeting. Reflecting the animosity toward Moscow, he underlined that “this delegation would comprise members of the true opposition in the field, and not persons Russia wants to see at the talks.”

The upshot of all this is that Ankara is even more defensive today than it was in the past with regard to Russian and US plans for Syria, even though it appears to be cooperating closely with Moscow and has not allowed its anger with Washington to boil over into a serious diplomatic crisis between the two countries.

Verda Ozer, a foreign policy analyst for the daily Hurriyet, argued that there is little Turkey can do against these two superpowers other than try to maintain a delicate balance between them.

“It might be possible to sit down at the table with Trump and work out a formula for reducing the area of influence of the PYD/YPG, while increasing cooperation with the Syrian regime and Russia,” Ozer wrote in her column.

She indicated that this would entail sitting at the table with the Bashar al-Assad regime and reducing support for opposition groups backed by Ankara. Ozer added, however, that even with these steps, there is no guarantee that Turkey’s plans will overlap with those of the US or Russia.

Soli Ozel, a lecturer in international relations at Istanbul’s Kadir Has University, is even less optimistic. “Turkey is unable to act in harmony with its established allies or with Russia — which it is thinking of using as a card against [its allies] — on a subject it considers of vital importance,” Ozel wrote in his column for the daily Haber Turk. He pointed out that Washington was continuing to arm the YPG, despite Ankara’s protests, while Moscow was inviting PYD representatives to Moscow even though Turkey’s animosity toward this group is well-known.

Given its continuing inability to alter the course of events in Syria, diplomats fear that Ankara may have decided to play a reactive and obstructive role in the Syrian peace talks, rather than a positive and proactive one.

If this is indeed the case, it is not immediately evident that this will provide Ankara with what it wants. To the contrary, it could leave Turkey on the sidelines again, as the powers it is unable to match continue to determine developments in Syria.