Turkey grants Syrians right to work, but is it too little, too late?

Ankara has finally granted Syrians the right to work in a belated move to stop more highly qualified refugees’ flight to Europe. 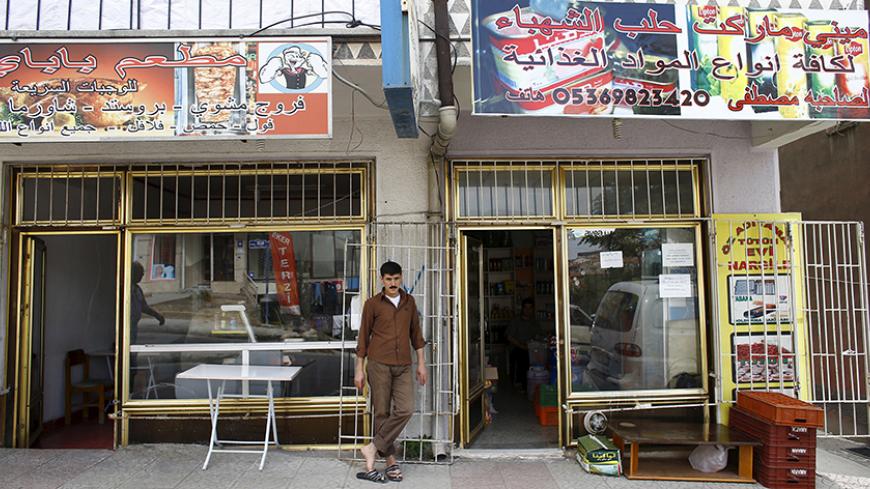 A Syrian man who had fled the war in his homeland stands outside shops run by Syrians in a low-income neighborhood of Ankara, Sept. 29, 2015. - REUTERS/Umit Bektas

In mid-January, Turkey finally granted Syrian refugees the right to work legally, five years after the influx from its war-torn southern neighbor began. However, many of the more highly qualified Syrians who fled to Turkey have already made their way to Europe, either as selected migrants or by braving clandestine sea and land journeys.

In dealing with the incessant wave of refugees, Ankara had focused on accommodation, and the issue of work permits was not treated as a priority. Similarly, combing out more highly qualified, well-trained Syrians and benefiting from them was not seen as something worthy of quick action. An overwhelming number of working refugees were employed illegally in low-paid, unattractive jobs.

Shortly before the larger-scale granting of work permits formally took effect Jan. 15, the government’s spokesman, Deputy Prime Minister Numan Kurtulmus, said that out of 2.4 million Syrians who had taken refuge in Turkey since 2011, only 7,351 had been given work permits — a striking figure illustrating how Syrians were shut off from the labor market. Only better-off Syrians who had the means to start their own small- and medium-scale enterprises had acquired work permits, while the rest were employed illegally as cheap labor.

Now, a new chapter has opened for the Syrians in Turkey. The Jan. 15 regulation covers all Syrians who have completed their registration procedures in the country. However, they will be able to work only in the provinces where they reside, and the number of Syrians in a given workplace will be limited to 10% of the total staff.

While explaining the reasons for the regulation, Kurtulmus conceded that, “Certain people used to come here on brain-hunting missions, taking the highly qualified, educated [Syrians] to their countries. The Syrians are not just children selling tissue at traffic lights.”

Yet a large number of the more highly qualified Syrians are already among the hundreds of thousands of refugees who have made it to Europe. They are gone. By granting Syrians work permits, Turkey is trying to stop the remaining, more highly qualified Syrians from going to Europe, as Deputy Prime Minister Yalcin Akdogan recently said. In an interview with Haberturk television on Jan. 16, Akdogan said, “European countries … admit Syrians who belong to certain categories [of] qualified labor. Turkey, too, has shortages in certain fields. There are also some other fields where a bit less qualified people can work. The Labor Agency makes announcements for open positions in certain fields but no one would apply. … [Syrians] can be employed in various fields. If we hadn’t issued the work permits, the qualified labor force would have gone to other countries and we would have been left with a much different picture.”

Some, however, believe the government’s move was too little, too late. Erdogan Toprak, a senior lawmaker for the main opposition Republican People’s Party (CHP), lamented that Turkey had for the third time failed to take advantage of a big influx of qualified labor since the First World War.

Speaking to Al-Monitor, Toprak said, “During World War I, there was a significant migration wave from Russia to Turkey. They were well-educated people, but Turkey failed to properly employ them … and they went to Europe. During World War II, well-educated, sophisticated people came from Germany, including scientists, mathematicians and so on. A very small number of scholars were employed in places like Istanbul University, while many others were not and let go. Most recently, the educated people who came from Syria could have been treated in a different category. Yet they saw well the opportunities and tried to make their way to Europe as soon as possible. Turkey failed to benefit from those people.”

Toprak said the flight of qualified people was the worst blow Syria took from the civil war, stressing that compensating for the loss would take long years even if the conflict ended soon. “The flight of capital can be recuperated, but making up for the qualified human resources will take at least 20 years,” he said.

The CHP deputy criticized the government for defining the Syrians as a “flexible” labor force. “They use this term in the sense of cheap labor, implying that [Syrians] can be employed below the minimum wage,” Toprak said. “Seeing the Syrians as cheap labor is a mistake. Qualified people cannot be a flexible labor force. With this approach, the [qualified] people who remain in Turkey will be lost as well.”

In an intriguing column on Dec. 15, Saim Tut from the Dirilis Postasi daily offered firsthand accounts of how qualified Syrians were wasted. “What have we done to help educated and qualified Syrians who are trying to open a permanent room of life for themselves in this country, which they see as the closest to them? Nothing,” the columnist wrote. “Most recently, I helped a young pharmacist, a graduate of [Damascus’] Kalamoon University, to get a job as a footman at the restaurant of a benevolent friend of mine. … Yesterday, I went with a heavy heart to [Ankara’s] Esenboga Airport to see off my friend Firas, a nuclear engineer from Hama, to Germany. A few months ago I wrote an article titled ‘Wash the dirty dishes well, Syrian engineer!’ And yes, this had happened right before my eyes. Just how benevolent, how glorious we are!”