With the difficult nuclear negotiations behind him, President Hassan Rouhani is now focused on domestic issues. 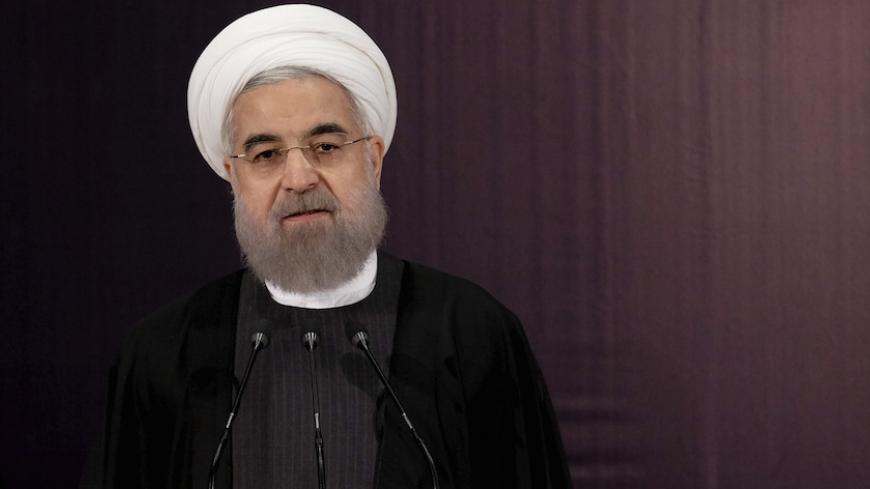 Iranian President Hassan Rouhani talks to journalists after he registered for February's election of the Assembly of Experts, the clerical body that chooses the supreme leader, at the Interior Ministry in Tehran, Dec. 21, 2015. - REUTERS/Raheb Homavandi/TIMA
Arash Karami
@@thekarami
January 18, 2016

President Hassan Rouhani scheduled a press conference Jan. 17 to herald a new era in Iran by announcing the lifting of international sanctions that were put into place over the country's nuclear program. Rouhani took nearly two years to fulfill perhaps his most important campaign promise of delivering a nuclear deal and easing the economic pressure on Iranian citizens. However, during the press conference, the president was forced to address another campaign promise that is currently hanging in the balance: the opening of the political climate in the country.

The day before Rouhani’s press conference, Iranian television, quoting the Guardian Council, which is tasked with vetting candidates to run in the elections, reported that more than half of the record number of 12,000 candidates to register in the parliamentary elections had not been qualified to run. Many of the candidates disqualified came from the Reformist and moderate camps, two groups that would have been allied with the president in creating a more open political climate in the country.

The record number of registrations were sure to bring a high number of disqualifications. However, the number of Reformist and moderate figures to be disqualified has surprised many observers. According to Seyyed Hossein Marashi, a member of the Reformist Policymaking Council, of the 3,000 Reformist candidates to register, only 30 were approved to run. Marashi criticized the disqualifications and said they contradict the statements by the supreme leader and stand in opposition to the political system of the country.

Fifty current members of parliament were also not approved to run, with 30 of their names belonging to the moderate conservative camp. Ali Motahhari’s disqualification surprised many. He is the son of Ayatollah Morteza Motahhari, one of the main theoreticians of the Islamic Republic, and a conservative politician on social and cultural policies. However, Ali Motahhari was perhaps one of the most outspoken politicians to speak against the house arrests of the Green Movement leaders.