Everything you need to know about this week's elections in Iran

Thousands of contenders are rushing to make use of Iran's short campaigning window in a contest that will determine crucial support for President Hassan Rouhani's policy efforts. 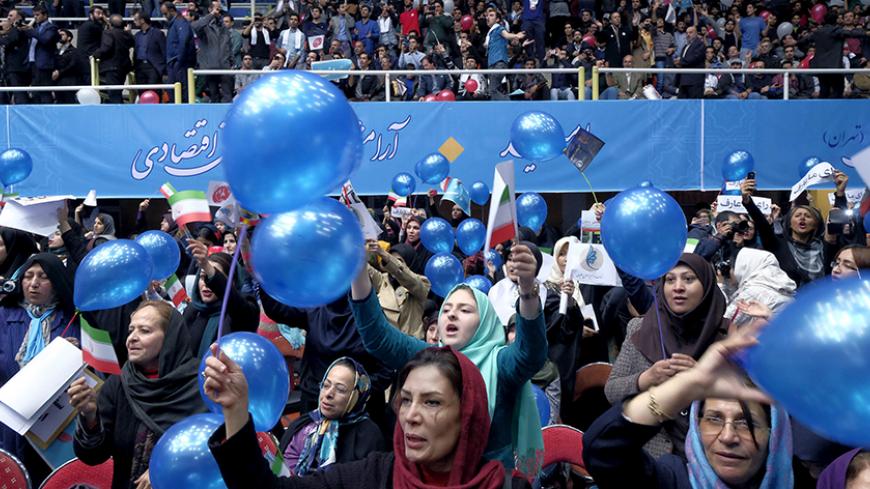 Iranian politics are often described as a battle between Reformists and conservatives. But since there are no official political parties in the Islamic Republic of Iran, this view is highly simplistic and sometimes inaccurate. In Iran, major political power brokers align among fluid and sometimes blurred factions and groupings. Major political events often dictate the platform of these factions rather than the reverse.

With an economy stabilized but not yet recovered and many campaign promises still unfulfilled, President Hassan Rouhani is hoping that the Feb. 26 elections brings about a grouping of parliamentary factions that will cooperate with rather than hinder his policies.

Whereas in the United States, campaign season feels like an unending affair, in Iran, the window for official campaigning — in which candidates can hold rallies and advertise — is very short. This year, campaigning began Feb 18. It will end just one day before the elections, on Feb. 25. One week of campaigning offers new candidates and lesser-known political figures very little time to create the momentum and publicity necessary to attract a high number of votes.

Many Iranians will decide to vote at the last moment based on “lists” that are often headed by a single popular figure. Despite many of their most accomplished members being disqualified, in prison or exiled, the Reformists are still pushing for a large turnout in the elections. The best-known Reformist figure in the country, former President Mohammad Khatami, is now banned from appearing in the official Iranian media. He released a video message encouraging voter participation and asking Iranians to vote for the candidates on the Reformist list to help the president fulfill his political, cultural and economic campaign promises.

In Tehran, one of the major electoral battlegrounds, 1,121 candidates are vying for 30 seats. Mohammad Reza Aref, who was Khatami’s vice president from 2001 to 2005, heads the Reformist list in Tehran. Before holding office with Khatami, the Stanford-educated Aref was the minister of technology from 1997 to 2000. At the urging of Khatami, Aref withdrew from the 2013 presidential elections in favor of the moderate Rouhani so as not to divide the Reformist votes.

Aref, like most other Reformists in the running, is a moderate. During his political life he has kept his distance from the more radical Reformist positions. Therefore, his 30-person list for Tehran predictably also includes moderate conservatives, Iran's Principlists. One name that surprised many was that of outspoken parliamentarian from Tehran Ali Motahhari. While Motahhari has earned the praise of Reformists for his criticism of the five-year house arrest of the Green Movement leaders, he is admittedly a conservative on social issues, particularly the never-ending battle over the enforcement of the country’s hijab laws. Motahhari also heads his own lesser-known but more conservative list of candidates called the People’s Voice.

Another name on the Tehran Reformist list that surprised some observers was that of Kazem Jalali, a member of the conservative Followers of the Leadership parliamentary faction. His inclusion is a prime example of the fluid and often ephemeral factional labels of politicians in Iran. Like most members of the Followers of the Leadership, Jalali supported Rouhani’s efforts to cut the nuclear deal. However, his position on the 2009 protests, that all individuals involved including the Green Movement leaders should have their charges reviewed, runs contrary to the current Reformist platform.

In today’s political climate, however, there is no doubt that the Reformists, supporters of the administration, moderate conservatives including parliament Speaker Ali Larijani and members of the Followers of the Leadership faction seek to prevent hard-liners from dominating the next parliament. Differences over the events of 2009 and cultural policies are overlooked in the interest of a political alliance that serves the interests of all those involved.

Despite reports of competing lists, conservatives have presented their own coalition in provinces across the country. Gholam Ali Haddad Adel, who has been a member of parliament since 2000 and was the first non-cleric to head it when he was speaker in 2004, leads the 30-candidate conservative list for Tehran. Haddad Adel is an adviser to Supreme Leader Ayatollah Ali Khamenei and their families are close. His daughter is married to Khamenei’s son Mojtaba. Rumor has it that Haddad Adel would like to take back the speaker of parliament position from Larijani, who has decided to run as an independent.

Though there are only nine women in the current parliament, 586 women are running in the parliamentary elections. Haddad Adel’s conservative Tehran list includes six female candidates. Aref’s list includes eight.

These elections will not change Iran’s foreign policy, nor will they jeopardize the nuclear deal. A cooperative parliament can, however, allow Rouhani’s ministers to focus on the difficult challenges ahead of them rather than being constantly summoned to parliament, as they have been in record numbers. In one of the more extreme cases, for example, the foreign minister was summoned for taking a stroll with the US secretary of state while conducting the nuclear negotiations in Europe.

If Rouhani intends to run for a second term and win, he will need a cooperative parliament to help him fulfill his campaign promises, such as more open universities.