The profitable business of Israeli occupation

Is the settlement enterprise a diplomatic or defense necessity for Israel, or a way to make money? 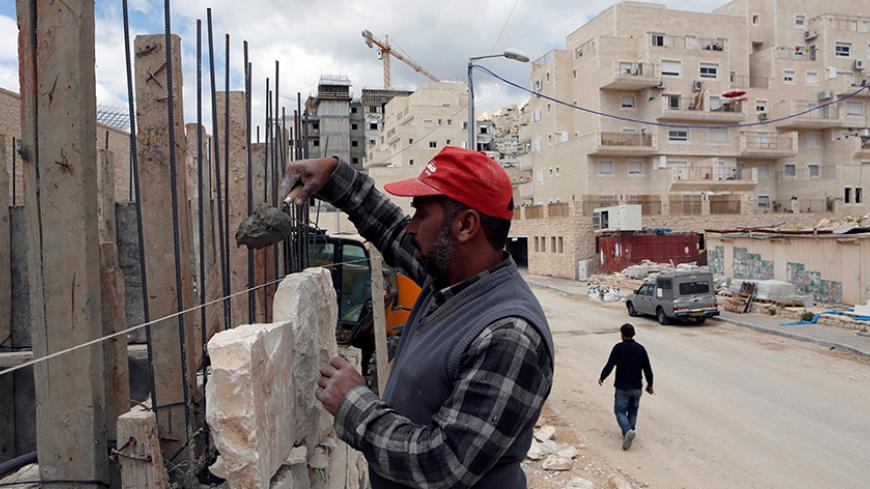 A Palestinian laborer works on a construction site in a Jewish settlement near Jerusalem known to Israelis as Har Homa, March 18, 2013. - REUTERS/Baz Ratner

On Jan. 26, it was UN Secretary-General Ban Ki-moon's turn to provide Israeli Prime Minister Benjamin Netanyahu with justification for his weekly lecture that “the whole world is against us” and “the Arabs want to annihilate us.” After US Ambassador Dan Shapiro played into Netanyahu’s hands by daring to criticize Israel’s settlement policy in a Jan. 18 speech, the secretary-general took his chances and decided to step on Israel’s toes. Not only did he call construction in the settlements “provocative acts,” he also drew a direct link between such activity and Palestinian terrorism. Ban stressed that he does not justify firing rockets from the Gaza  Strip or incitement against Israel, but, he said, “As oppressed peoples have demonstrated throughout the ages, it is human nature to react to occupation, which often serves as a potent incubator of hate and extremism.” Ban noted that Palestinian frustration was increasing under the yoke of half a century of occupation and paralysis of the diplomatic process.

In response, Netanyahu claimed, “The Palestinian murderers do not want to build a state — they want to destroy a state, and they say this openly. They want to murder Jews.” He further insisted, “They do not murder for peace and they do not murder for human rights.” For the sake of this article, let us assume that Netanyahu’s diagnosis is correct and that the motive of a 13-year-old girl and a 15-year-old boy in stabbing Jews was the desire to destroy the State of Israel and annihilate the Jews. If so, then what about the more than 99% of other Palestinians living under Israeli occupation? Do they also not want to build a state of their own? Do they only want to destroy the State of Israel?

The answer, and a suggestion for remedying the situation, can be found in comments made Jan. 18 by Lt. Gen. Gadi Eizenkot, the Israel Defense Forces (IDF) chief of staff. “The populations are mixed,” said the country’s top soldier. “Despite the terror wave, we insist on differentiating between terrorism and the population, and 120,000 Palestinians must go out to work each day in Israel and in Judea and Samaria in order to provide for their families. I think this is in Israel’s interests. It’s a moderating force.”

There is a problem with the remedy proposed by the chief of staff. Modern history, including the annals of the State of Israel, proves that it has a largely limited effect on a population suffering from chronic colonialism. The IDF is deployed in the West Bank not only, and perhaps not even mainly, to protect the residents of the State of Israel. The soldiers, police and Shin Bet operatives are also an inseparable part of the settlement enterprise. There is absolutely no connection between this enterprise and Israel’s diplomatic and defense needs, not to mention ethics and democracy. The Israeli occupation is a business that generates sizeable revenue for its owners. Colonial capitalist regimes — Israel being the only remaining practitioner of this type of system in the world — are based on the exploitation of the natives’ natural resources and their cheap labor. A few more employment opportunities for Palestinians at construction sites in Israel and in the settlements are totally useless.

A comprehensive report issued Jan. 19 by Human Rights Watch describes the occupation mechanism to which the UN secretary-general referred. In Netanyahu’s view, the information laid out in the document is undoubtedly part of the “Palestinian incitement” that encourages terrorism. Nonetheless, let us examine some of the findings of the report, “Occupation, Inc.: How Settlement Businesses Contribute to Israel’s Violations of Palestinian Rights.”

Although the exploitation of natural resources in conquered territory is a violation of international humanitarian law, Israel has issued permits to West Bank settlements to operate 11 quarries. According to the authors of the report, even a European company was granted a license to operate a quarry, near the village of Beit Fajr, on Palestinian land that Israel had declared state land. On the other hand, Israel refused to issue operating licenses to nearly all the non-active quarries in Beit Fajr, some 40 total, and to almost every other quarry owned by Palestinians in West Bank areas under Israel’s administrative control (area C, about 60% of the West Bank). The World Bank estimates that the de facto ban imposed by Israel on licenses to operate Palestinian quarries costs the Palestinian economy some $241 million annually.

This is small change compared to the cost of other restrictions Israel imposes on Palestinians living in Area C, most of the measures being directly linked to settlement policy, free movement and land use. The World Bank puts this cost to the Palestinian economy at $3.4 billion a year. Israel’s illegal and discriminatory policy on land and water allocations has dealt a particularly strong blow to farmers in Area C, robbing many of them of their traditional livelihood. These restrictions have resulted in deepening unemployment and a decline in income. The head of the local council in the village of Marda, which has seen much of its land expropriated for the expansion of the Ariel settlement, told the organization, “Once we had tens of thousands of barnyard animals; now you can barely find 100 because there is no grazing land.”

As a result, many of Marda's residents, like 11,000-13,000 other Palestinians, have no choice but to work in the settlements or in adjacent industrial zones. During a debate in the Knesset’s Public Petitions Committee in late 2013, Chairwoman Adi Kol of Yesh Atid said that government agencies allow the distress of these laborers to be exploited by turning a blind eye to the violation of the basic rights of Palestinian workers.

After all is said and done, Israeli ministers and diplomats shamelessly accuse the European Union of robbing the Palestinians of their meager earnings by deciding to label goods produced in the settlements, allegedly by damaging industries employing Palestinians. They make a mockery of those forced to swallow their pride to (barely) provide for their families, while at the same time filling the pockets of their employer-occupiers.

This month, the Israeli Government Press Office invited foreign correspondents to visit a plant in one of the settlements, where they met with Palestinian workers. The workers had to speak in the presence of their employer, so obviously they said how grateful they were for the opportunity to make a living. Perhaps this is what the secretary-general meant when he spoke of the occupation as an incubator of hatred and extremism.

by Murielle KASPRZAK and Joseph SCHMID | AFP | May 26, 2022
END_OF_DOCUMENT_TOKEN_TO_BE_REPLACED