Netanyahu, Abbas can avoid next abduction 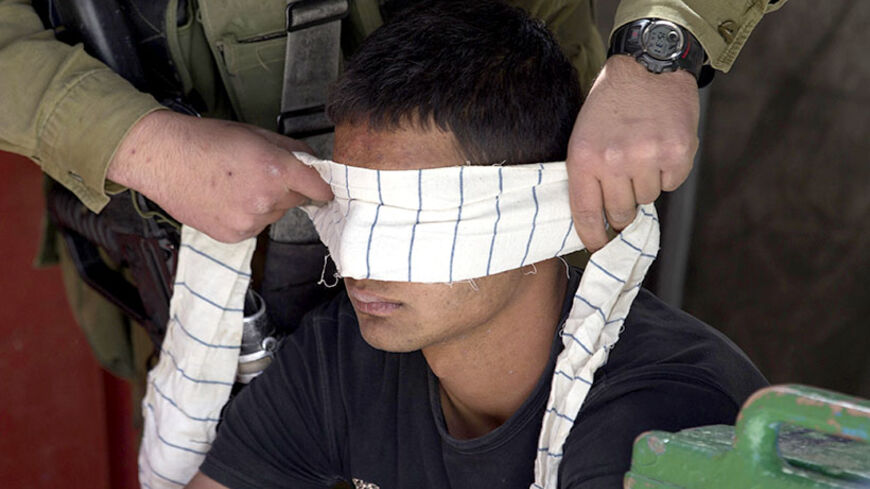 An Israeli soldier blindfolds a Palestinian man suspected of throwing stones as he detains him during clashes in Hebron, June 16, 2014. - REUTERS/Baz Ratner

The Hamas members who abducted the three Israeli teens could have foreseen how Israel would respond. You do not have to be some military correspondent in the know to assume that the Israel Defense Forces (IDF) would place the West Bank under closure, arrest dozens of suspects and, at the same time, “eliminate” a few wanted men. The kidnappers would have been safe in assuming that the house-to-house searches would increase the civilian population’s hostility toward Israel. Whatever shaky faith in the peace process still exists will have suffered another blow.

Nor did the kidnappers need the services of political pundits with diplomas to anticipate that Israeli Prime Minister Benjamin Netanyahu would cast the blame on Palestinian President Mahmoud Abbas, who signed a reconciliation agreement with the very organization whose members were responsible for the abduction. It should be obvious that presenting the Palestinian leader as a partner to the crime would hardly improve his status as a reliable partner in achieving a two-state solution.

It could even be safe to assume that the kidnapper’s objective was to neutralize ''the risk'' that the new Palestinian reconciliation government would breathe life into the diplomatic process. Past experience shows that a “high-end terrorist attack,” meaning a terrorist attack that causes considerable commotion in the media, harms any chance for compromise and reconciliation between the two parties. There is no surer recipe to foil any arrangement that would force the Palestinians to make do with the 1967 borders, minus a few border adjustments, or to give up the right of return.

And what is Netanyahu doing? That’s right. The prime minister is following the kidnappers’ instructions to the letter. He has ordered the army to impose a closure on the territories, raid the city of Hebron and arrest anybody they can get their hands on. Netanyahu is attacking Abbas from every possible podium. He is using the opportunity to incite public opinion in Israel and score points in the international arena. What American politician would dare to accuse him now of causing Secretary of State John Kerry’s initiative to fail, especially now? What European leader would have the courage today to condemn the government’s settlement policy? What left-wing Zionist would have the temerity to point to any connection whatsoever between terrorist activities committed by the settlers, which go under the name of “price tag,” the light-handed response of some Israeli troops and the kidnapping of the settlers?

Ever since the early days of the diplomatic process, which began with the signing of the Oslo Accord in September 1993, rejectionist groups have spared no effort to sabotage moves designed to reach a peace agreement. Religious zealous and radical right-wing activists on both sides have discovered that there is nothing like the weapon of terrorism to block any progress in the negotiations.

Hamas blew up buses in 1993 and the Israeli right wing — helped in large part by the media — placed the blame on the “criminals of Oslo,” going so far as to accuse late Prime Minister Yitzhak Rabin of treason. An Israeli doctor murdered 29 worshippers in the Cave of the Patriarchs in February 1994 and Hamas approved suicide bombings. Nevertheless, Rabin refused to grant terrorism a veto over peace. The prime minister boldly stood his ground and announced that he would fight terrorism as if there were no negotiations, and continue the negotiations as if there was no terrorism. Palestinian President Yasser Arafat, and later his successor Abbas, also stuck firmly to the diplomatic option, even if it meant restraining themselves in the wake of a wave of construction in the settlements and provocative settler acts.

When the government was transferred to the right-wing leadership of Netanyahu and late Prime Minister Ariel Sharon, every terrorist attack served as an excuse or a reason to suspend negotiations and portray the Palestinian Authority (PA) as “supporting terrorism.” After considerable efforts, Shimon Peres, who was foreign minister at the time, succeeded in convincing Sharon in November 2001 to lower the threshold on the war on terror that he set before the Palestinian leadership “from 100% success to 100% effort.” Peres’ position won the support of the Israeli security establishment. How could the impoverished Palestinian security forces, whose very movement was restricted, succeed where the big and powerful IDF and the resource-rich Shin Bet were failing? That is what the verse meant when it said, “Your servants are given no straw, yet we are told, 'Make bricks!'" (Exodus 5:16).

These two important rules of the game, introduced by Rabin and Peres, can only exist as long as the main goal is resolving the conflict. Creating facts on the ground by encouraging the settlement enterprise is interpreted by the Palestinian public — and by quite a few Israelis, too — as a policy intended to perpetuate the occupation and sabotage any chance for peace.

In the absence of reliable peace negotiations, actions such as the kidnapping of settlers are not considered “terrorism” by Palestinians. Rather, they are part of a legitimate struggle against a foreign occupation. Under such circumstances, Rabin’s statement loses its validity. As a result of the efforts of Palestinian security forces and the productive collaboration between their leaders and Israeli colleagues, there has been a sharp decline in the scope of terrorist attacks against Israelis. But that is not enough for Netanyahu. He demands that the PA achieves 100% success in its struggle against incitement being published against Israel, while foregoing their right to join international organizations or to encourage the boycott against products from the settlements.

If Netanyahu would have wanted to advance a solution to the conflict, he would have proposed to Abbas that they sign a joint convention inoculating the diplomatic process from those harmful forces trying to gnaw away at it. If the prime minister was interested in preparing the Israeli public for peace, he would praise Abbas for his longstanding contribution to their security.

Netanyahu’s behavior shows that all he cares about is managing the conflict. This is very worrying, especially since he is having such a hard time managing his own home.