The arrest of Palestinian journalist Salim Sweidan and his detention for four days has exposed a broken legal system where understandings are replacing the rule of law. 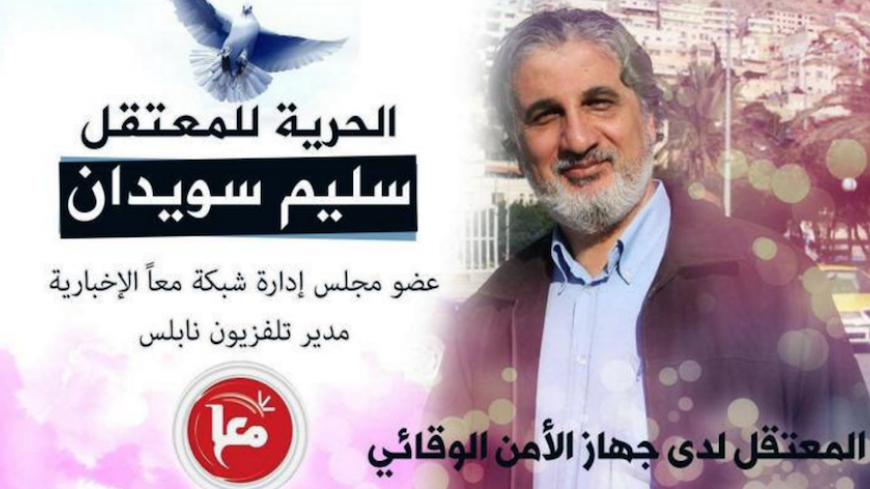 Palestinian journalist Salim Sweidan, owner of Nablus TV, was released Jan. 12 after having spent four days in jail. Sweidan, a member of the board of the Maan News Network, the leading independent satellite station and news website, was released on a bail of 1,000 Jordanian dinars ($1,400) after publishing an online apology.

In an interview with Al-Monitor, Sweidan said that the reason for the arrest was that his TV station's website republished a news story that had been written about the circumstances surrounding the arrest of a Hamas cell accused by Israel of killing two Israeli settlers in October 2015.

Members of the Palestinian Preventive Security Forces in Nablus had summoned Sweidan to their offices, where he was subsequently held. The name of one of the officers was listed in a controversial posting on the website that explained why the security force took the unusual step of arresting a well-known veteran journalist.

From the moment of his arrest, friends and colleagues rallied on social media to protest the arrest and appealed to local and international organizations. MADA, the leading Palestinian nongovernmental organization defending freedom of expression, issued a statement Jan. 11 calling for Sweidan’s release.

During his imprisonment, Sweidan argued with his captors telling them that what they were doing was against stated Palestinian policy. “I told them that President [Mahmoud] Abbas made it clear in a statement in 2014 that no journalist should be detained on issues of freedom of expression,” Sweidan told Al-Monitor after his release.

Raed Othman, director general of Maan News Network, told Al-Monitor that the problem lies in the extended powers that the security apparatus has. “By allowing them to bypass the police and make direct arrests, the Palestinian government has violated its own policies,” he said.

Majed Arruri, a media and human rights expert echoed a similar view. Arruri told Al-Monitor, “Palestinian courts should increase their monitoring over the procedures carried out by the security forces against journalists.”

The Maan News Network’s board of directors denounced Sweidan's detention. “The Preventive Security Forces should have denied the report if it was not true, rather than treat journalists this way,” Maan said in its statement Jan. 10.

After his release, Sweidan also denounced the double standards that exist among Palestinian officials. “Is there a different law in Nablus than in Ramallah?” Sweidan asked in the interview with Al-Monitor. He was referring to the fact that the story reprinted in Nablus — which resulted in his arrest — was first published on a Ramallah-based news website. Both websites withdrew the story shortly thereafter, but only Sweidan was arrested.

Sweidan faulted his own staff for republishing the story without checking the facts, but all he could do then was remove it from the website. The details of the story were very juicy, and the public was eager to know how the Hamas cell was captured.

The head of the Palestinian Journalists Union, Abdel Nasser Najjar, opposed in an interview with Al-Monitor Sweidan’s detention, calling his arrest “unacceptable” and demanding that journalists never be imprisoned for doing their work.

“Journalists transmit the news; they should not be imprisoned simply because of the content of what they publish. If it is wrong, the mistake can be remedied in publication, not by arrest,” he said.

According to Najjar, the number of arrests and restrictions of journalists has been on the increase lately. “Over the last few months, we have seen a marked increase in detentions by the security forces against journalists,” he said.

Geographically, Najjar pointed out that arrests are taking place both in Nablus and the Gaza Strip, which is under the control of Hamas.

Montaser Hamdan, an elected member of the Palestinian Journalists Union in charge of journalists’ protection, said that things would be worse if journalists didn’t do their job. “If we don’t publish the truth, this would lead to rumors, lies and a campaign that will eventually delegitimize the Palestinian government,” Hamdan told Al-Monitor.

In the absence of a clear policy against the arrest of journalists, media practitioners and lawyers are often forced to liaise with the authorities. In the case of Sweidan, his release appears to have been expedited after an apology was published on the Nablustv.net website and a campaign poster calling for his release was removed from it.

Anees Sweidan said that the apology and the appeal were part of the understanding that eventually led to the release of his brother.

Salim later told Al-Monitor that he was not consulted about this understanding, and that he would have rejected it had he known about it. “I would have rather spent 10 more days in jail than publish this humiliating apology,” he said. Both apology and appeal disappeared from the respective home pages of Maan News and Nablus TV shortly after his release.

The continued arrest and detention of non-police security officials point to a dangerous trend in Palestinian society, which reflects the sense of political chaos on the Palestinian political scene. Legislation is badly needed to protect journalists and to ensure the rule of law for all, irrespective of where they live.