In an interview with Al-Monitor, Palestinian chief negotiator Saeb Erekat says Iran should mind its own business, and stresses the need to preserve the Palestinian Authority. 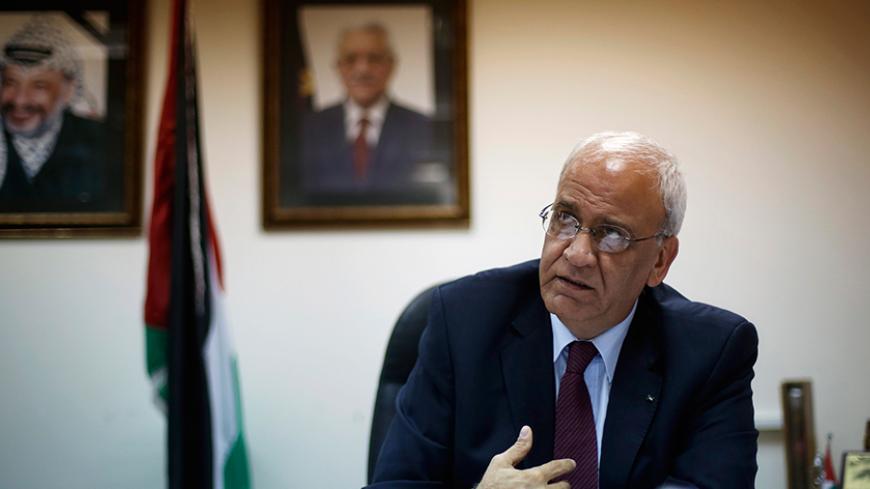 JERICHO, West Bank — Despite the rising death toll, with 156 Palestinians killed since Oct. 1, 2015, President Mahmoud Abbas made a point of discussing larger regional conflicts during his Jan. 6 speech in Bethlehem. Abbas exclaimed three separate times, “We stand with Saudi Arabia” in its clash against Iran.

In a wide-ranging interview with Al-Monitor at the Negotiations Affairs Department’s office of the PLO, chief negotiator Saeb Erekat adopted a harsh tone against Tehran, saying, “The Iranians should stop poking their noses into the affairs of others or exporting their revolution.”

Ghassan Khatib, former Palestinian minister of labor and director of the Palestinian Authority’s government media center, explained the PA leadership’s position, telling Al-Monitor, “Saudi Arabia has been one of the most generous and consistent donors to the PA. At a time when the PA is in need of stable support from outside, relations with Saudi Arabia count for the PA and need to be taken into consideration.”

Khatib said that Iran’s previous support for Hamas “has led PA officials to think that Iran is a factor contributing to a split in internal Palestinian politics, which is bad for the Palestinian cause.”

After firing Yasser Abed Rabbo on June 30, 2015, as the secretary-general of the PLO, Abbas appointed Erekat to the No. 2 position within the PLO Executive Committee.

Erekat is considered one of Abbas’ closest confidants; after answering a phone call during the interview, Erekat said that Abbas personally contacts him.

When discussing the surge in Islamic State attacks, Erekat asked, “If IS begins to kill Israelis, who do you think in the Islamic world will condemn them? No one.”

The senior Palestinian official compared the current violence in the Arab world to the 1848 uprisings in Europe and expects the upheaval to continue in the Middle East for 30 years.

In addition to criticizing Israeli Prime Minister Benjamin Netanyahu for maintaining a “PA without any authorities,” Erekat defended Fatah’s decision to hold the 51st anniversary celebration in Damascus on Jan. 8, with pictures of Abbas alongside Syrian President Bashar al-Assad while praising the Assad regime. Fatah’s rally provoked widespread controversy among Palestinians. But Erekat cited the 600,000 Palestinian refugees in Syria in justifying this policy.

For the first time in 33 years, the Syrian government reopened an official Fatah office in Damascus on Aug. 13, 2015, after years of mistrust. Khatib was skeptical of Ramallah’s recent warming of ties with the Assad regime, saying, “This is the wrong calculation and it is like betting on the wrong horse. We did that in Iraq earlier during Saddam [Hussein’s era] and paid a very heavy price for this.”

Arafat’s siding with Saddam during the 1991 Gulf War caused Saudi Arabia and other Arab states to reduce their support for the PLO during this period, isolating the Palestinian leader.

When asked why Abbas has not appointed a vice president despite being 80 years old and succession rumors swirling, Erekat replied, “I don’t know if he can in accordance with our basic laws so far. This decision requires a decision by the Palestinian Legislation Council.”

However, George Giacaman, a political scientist at Birzeit University near Ramallah, told Al-Monitor that Abbas has still carried out influential decrees, even during the period of the defunct PLC. Giacaman said, “Since the PLC is not functional, this has not prevented Abbas from legislating on his own after the breakup between Gaza and Ramallah.”

Downplaying the PA arrest approximately three weeks ago (an exact date of the arrest was not released) of an alleged Israeli spy who worked from an office in Ramallah over the past 20 years, Erekat noted the widespread use of espionage among nations and compared the situation to rivalry among reporters. He said, “Even journalists compete for skoopsionage” (a pun on the word espionage).

Al-Monitor:  How does the Saudi-Iranian rift impact the Palestinian cause?

Al-Monitor:  Was holding Fatah’s 51st anniversary celebration in Damascus praising Assad with pictures of [him] the correct move given the war crimes allegations against Assad?

Erekat:  There are 600,000 Palestinian refugees in Syria. When Fatah holds any of its annual support [he means celebrations, but these are Erekat’s exact words] in Moscow — we have Palestinians there — it is with President [Vladimir] Putin and President Abbas. We ache for what is going on in Syria. But we are guests in Syria and not citizens. We said from day one that we would not have any interference in the events of Syria.

Al-Monitor:  President Abbas spoke about establishing an international conference in his recent speech, to focus on Palestine. What practical steps have been taken to set up such an event? Who is backing this initiative outside the Arab world?

Erekat:  We want the five permanent members of the UN Security Council to be there. We are in the process of discussing this with many countries. So far, we cannot give any response other than that people are looking forward to being part of the peace process, and one of the ideas is the international conference. We want it as soon as we can agree on it. Will Netanyahu agree to it? I don’t know.

Al-Monitor:  How does the violence spreading across the Arab world — including in Iraq, Syria and Libya — impact the Palestinians?

Erekat:  My main priority is not to allow IS to raise its flag in Palestine. We must defeat IS and extremism. Judaism to me is not a threat. Judaism is one of God’s religions, like Christianity and Islam. Our conflict is not a religious one. IS today is killing Iraqis, the French and Turks; no one sympathizes with them. If IS begins to kill Israelis, who do you think in the Islamic world will condemn them? No one.

What we are trying to do with the resolutions through the Security Council or General Assembly or with the International Criminal Court membership is to say to the world that bringing Palestine back to the map is one of the most important ingredients for stability and peace in the region. On the other hand, Netanyahu is saying, "I’m not against two states, but let's wait until [we see] what happens in Syria.”

In my opinion, what is going on in the Arab world now is what Europe went through in 1848 when Chancellor [Klemens von] Metternich had to flee his palace after three weeks of peaceful demonstrations; it took Europe years for the dust to settle down. What is going on in the Arab world is that the contradictions between good governance and the lack of rule of law, woman’s rights and democracy will take 30 years to settle down. There will be a lot of bloodshed. Now Netanyahu is saying, let’s wait for the 30 years without Palestine being back on the map. What we are saying to Netanyahu is, no, don’t be politically blind. The fact here is that Palestine being brought back to the map will limit this period of suffering in this region.

Al-Monitor:  Palestinian officials have repeatedly threatened to disband the PA, but in President Abbas' recent speech he rejected such a move. Why wouldn't Palestinian leaders consider breaking up the PA if it could increase the pressure against Israel, both economically and militarily?

Erekat:  I don’t recall any Palestinian official speaking about dismantling the PA. We need to redefine the Israeli-Palestinian relations. The PA was born in an international contract between the PLO and Israel in order to move the Palestinians from occupation to independence through peaceful nonviolent means — negotiations. What I’m saying is that Israel has killed the PA and replaced it with a Palestinian authority without any authorities, because they [Israel] established the so-called civil administration of Judea and Samaria. If Abbas, my president, wants to go to Amman, he needs permission from them. If the Israelis refuse to implement the obligations of the [Oslo] agreement signed, we must redefine our security, economic and political relations with Israel. We want to maintain the PA. The PA can be maintained if we go back to a peace process that will lead to a two-state solution that will lead to a Palestinian state. The current situation is not sustainable.

Al-Monitor:  Why hasn’t President Abbas appointed a vice president given his advanced age?

Erekat:  I don’t know if he can in accordance with our basic laws so far. This requires a decision by the PLC. Today the talk about Palestinian internal politics is very important. We have strong institutions to answer these questions after what happened when Yasser Arafat passed away. I am not really worried about this prospect.

Al-Monitor:  One of your employees was arrested for “spying for Israel.” Can you shed light on the story? What was his position? Did he have access to confidential documents?

Erekat:  The PA intelligence services came to me about six weeks ago and told me that they have evidence they shared with me. I signed on the arrest of my employee — who by the way had nothing to do with my advisers, politics or meetings. He was the head of the purchasing department; he looked after the furniture, coffee and tea. This man has a right to a court [hearing] — let our judicial system work with it. I still believe that — as Palestinians — we should stick to the line that people are innocent until proven guilty. I am not digging tunnels in this department. The papers that I prepare in my department are the ones I hand to the Israelis. Let’s not stand with our gossip and conspiracies, if someone wants to get back at Saeb Erekat. This man has a wife and two children. Let us not pass any judgment before the court. What’s the big deal? These things happen. Nation-states have industrial espionage, intellectual espionage, and even journalists compete for “skoopsionage.”

Al-Monitor:  Isaac Herzog, the leader of the center-left Israeli Labor Party, called Abbas a "frightened and panicking" leader. What is your response?

Erekat:  He can say whatever he wants about his prime minister; but as far as my president, he is totally unfair. Herzog met with President Abbas and heard from him a commitment to the two-state solution, negotiations and nonviolence. It is unfair and unacceptable.