Why so many Lebanese are looking abroad

As the economic and political situations in Lebanon worsen, more Lebanese seek to emigrate to the West and to Gulf countries for better job opportunities. 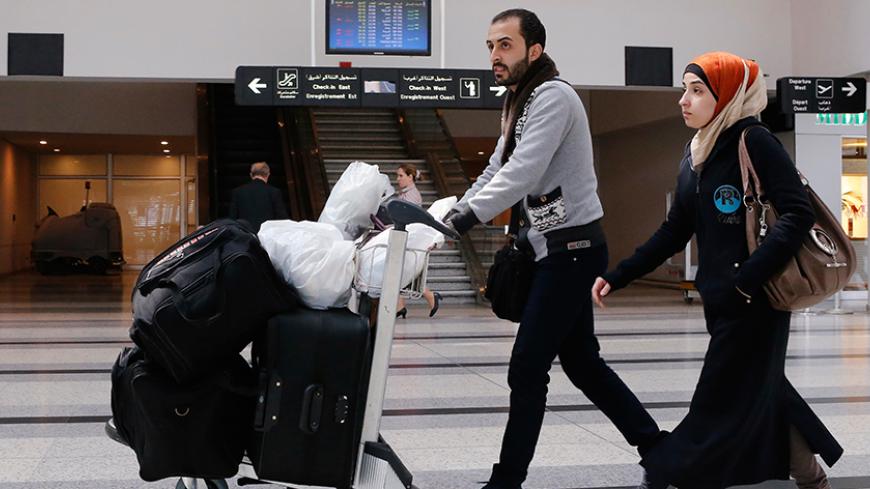 A couple, who said they are leaving Lebanon for good, push their luggage at Beirut's international airport, March 28, 2014. - REUTERS/Mohamed Azakir

A worsening economic situation with increasing poverty and unemployment are pushing many Lebanese toward immigration, looking for better prospects either in the West or in Gulf countries.

“There is no more hope in Lebanon,” said Charbel Lahoud, an agricultural engineer with an MBA who is preparing his papers to emigrate to Europe.

Statistics support Lahoud’s grim outlook. According to Information International, about 34% of Lebanese were looking to leave Lebanon in 2015.

A growing number of nationals are trying to reach Europe or Australia in boats. In October 2015, seven people from the Safwan family drowned when their boat capsized on the way to Europe from nearby Turkey. In another incident in September 2013, some 60 Lebanese drowned while trying to reach Australia from Indonesia.

According to Chamsedine, the meteoric rise in immigration began in 2010.

Lebanon has historically seen high immigration. According to figures provided by Information International, in 2014, about 1.3 million Lebanese out of a 5.2 million population were already living abroad. These figures only include holders of Lebanese nationality while excluding people of Lebanese descent and who do not hold Lebanese citizenship. This population mostly resides in South America.

Immigration levels, which steadily grew during Lebanon's civil war (1975-1989), slowed between 1993 and 2010, a time marked by relative economic stability.

The Lebanese government has done little to end the brain drain. An official source in the Ministry of Social Affairs told Al-Monitor that the issue is becoming “a priority and that the ministry has put in place developmental projects that could help put an end to it.”

Others interviewed by Al-Monitor were nonetheless skeptical.

“We are in a state of a political cold war. Things are not moving; everyone is in a wait-and-see approach,” Lahoud said, referring to the impact of regional sectarian tensions, which have paralyzed both the government and the presidency.

Lebanon has been without a president for one year and eight months, since the end of the mandate of President Michel Suleiman in May 2014. Prime Minister Tammam Salam even stated on Dec. 15, 2015, that the paralyzed government was “worthless,” as political deadlock has prevented the Cabinet from meeting regularly.

Institutional and economic decay has pushed Lebanese from all walks of life to seek better opportunities in faraway lands. Interestingly, Chamsedine noted, in 2014, the proportion of Muslims who wished to immigrate became higher than that of their Christian counterparts. In effect, about 24% of Maronite respondents said they were considering emigration, in comparison to 43% of Sunnis and 50% of Alawites. In addition, the large majority of people who wanted to emigrate were highly educated, representing 46% of the total of respondents.

Several reasons can explain the Lebanese nationals’ eagerness to leave their home country. Marwan Nuwayhid, a journalist who was living in Dubai and is now temporarily in Lebanon, explained that there are limited career opportunities for Lebanese in their home country. He told Al-Monitor, “Career progression has become very difficult in Lebanon. One can grow more in Dubai because of the number of multinationals operating there and the economic stability.”

This opinion is shared by Lahoud, who underlined that in Lebanon, “It takes a very long time to go up the corporate ladder and it is extremely difficult without the right connections.”

Other reasons mentioned by those interviewed by Al-Monitor were a general dearth of motivation and the lack of respect many employers have for employees. Maria, a young banker who did not want to give her last name, said large Lebanese companies rarely show appreciation for their employees, who are often treated with little respect.

“At least in France or America, employees have rights and they are treated equally whatever their background is,” Lahoud added.

Tarek Baz, who earned a business degree but works as a salesperson for a distribution company, said that he was offered a salary four times his current one if he immigrated. “It makes a big difference when you have a family,” he told Al-Monitor.

Nuwayhid believes that those residing in Lebanon can rarely afford to buy a house and have to live with their parents. Lahoud agrees, adding, “I have not achieved as much as my friends in the same age group who left Lebanon, whether from an employment or a social perspective. My friends have made enough money to afford to buy a house and get married, which is not the case for most people in Lebanon.”

However, some in Lebanon say that family responsibilities or social ties keep them here. Baz said that in spite of the interesting offers and political instability, he is still hesitant to leave, as he feels he will miss the social and family relations he still enjoys here.

Others, like banker Maya Chehayeb, say they cannot leave for family reasons. She told Al-Monitor, “Besides the fact that I do not want to start from zero, I also have family responsibilities, namely toward my parents, whom I do not want to leave behind.”

Worsening living conditions are making things more difficult for Lebanese who want to remain. Lebanon has been facing a waste crisis since August 2015, one Health Minister Wael Abou Faour labeled a potential “health catastrophe.” The government finally agreed in September 2015 to ship its waste to a location that has not been revealed, but the plan has yet to be implemented.

“Deciding to stay in Lebanon means giving up on your standard of living, and [fewer and fewer] people are willing to do that, especially if they have experienced another lifestyle elsewhere,” Nuwayhid said.