Uber drives a wedge between Bibi and Israel's transportation minister

The dispute between Prime Minister Benjamin Netanyahu and Transportation Minister Yisrael Katz over approving the entrance of ride-sharing app Uber to the Israeli market revealed a power struggle between the two men. 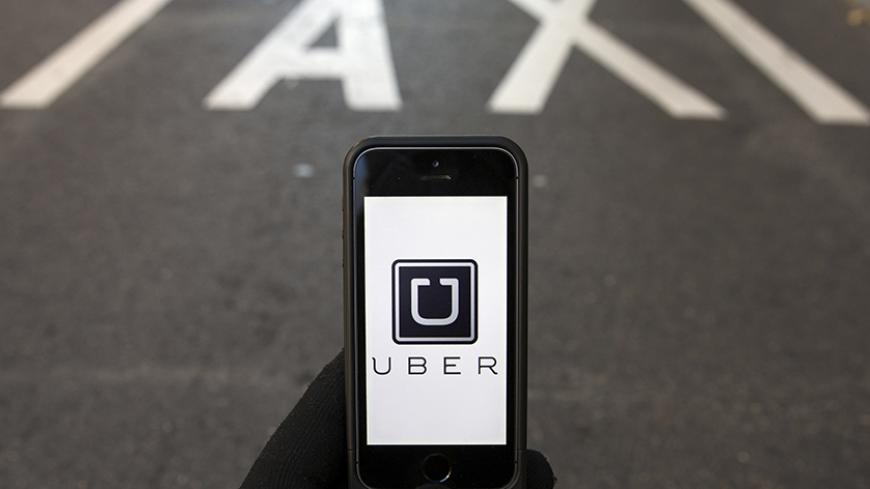 The logo of car-sharing service app Uber is seen on a smartphone held over a reserved lane for taxis, in Madrid, Dec. 10, 2014. A dispute is emerging in Israel between Prime Minister Benjamin Netanyahu, who favors Uber entering the Israeli market, and Transportation Minister Yisrael Katz, who stands in opposition. - REUTERS/Sergio Perez

On the morning of Jan. 29, while the weekend newspaper columns were busy speculating about the political implications of the war that broke out between Prime Minister Benjamin Netanyahu and Transportation Minister Yisrael Katz, the latter put up a post on his Facebook page. His post was designed to convey confidence and productive activity, as well as to take an implied dig at Netanyahu.

“This is the way to carry out a reform,” the minister wrote. He reported that “construction of the new seaport in Ashdod is already underway, without any conditions attached.” This, he added, “is a true revolution, which will lead to competition, streamlining and reduction of the cost of living.” In a photo he attached to the post, Katz is seen against the backdrop of the Ashdod coast, flanked by top port managers.

Through this energetic post, Katz in fact sought to make clear that he was not giving in to the prime minister.

The publicized fight between the two broke out at the latest Cabinet meeting Jan. 24 over the entry of the international Uber ride-sharing service into Israel. The service is operated through an app that allows the owners of private vehicles to transport paying passengers. So far, the service has been banned in Israel, mostly under pressure from cab drivers who have the most to lose from such a service. Katz has been looking out for them, so far successfully so.

Netanyahu walked into the Cabinet meeting with Katz already in his sights. Netanyahu had returned several days earlier from the World Economic Forum in Davos, Switzerland, where he met with the CEO of Uber. Netanyahu told the assembled ministers about the meeting and then (reportedly) turned to Katz and said, “Why aren’t you promoting competition in the taxi industry?” Those present said Katz looked Netanyahu straight in the eye and launched a frontal attack: “Now you’re talking about competition, all of a sudden? After what I did with the seaports and the open sky reform [in the flight industry]?”

The troubled and tense relationship between the prime minister and the veteran senior minister burst into the open, no holds barred. “My job is not to take care of foreign tycoons, but of all the citizens of the State of Israel,” Katz continued, hinting at the prime minister’s close friendship with American billionaire Sheldon Adelson, and perhaps also at the outline for the exploitation of Israel’s natural gas reserves, which was approved by the government under pressure from Netanyahu.

Anyone following the relationship between the two knew a blowup was only a matter of time. Katz and Netanyahu have been on a collision course since the March 2015 elections. The reason: Netanyahu broke a promise to Katz to appoint him to one of the top three ministerial Cabinet posts — treasury, defense or foreign affairs. Katz, until then a close ally, viewed this as a declaration of war.

In recent months, an especially cold wind has been blowing at Katz from the house on Balfour Street, and it intensified the more Katz scored points for his performance at the Ministry of Transportation. Katz started positioning himself as a reformer and activist, and he received favorable media coverage. Throughout the history of Netanyahu’s relations with his successful top ministers, this is the exact moment when they turned into marked men for their perceived threat to the prime minister.

Katz added fuel to the fire by leading oppositional and independent moves vis-a-vis Netanyahu in the Likud Party’s institutions. As chairman of the party’s powerful secretariat, he helped Welfare and Social Affairs Minister Haim Katz overcome Netanyahu’s favored candidate Tzachi Hanegbi to win the December 2015 vote for the position of chairman of the Likud’s central committee. Katz then tried to oppose Netanyahu’s attempt to move forward the primary elections for the Likud leadership, but backed off when he understood he was alone on the battlefield.

The combination of all of the above was an explosive mix waiting for the right moment to blow up, and Netanyahu’s revenge was not long in coming. On Jan. 27, Katz found out that he had been excluded from the front row in a group photo of the government ministers with visiting Greek Prime Minister Alexis Tsipras. A chair bearing Katz’s name was placed in the second row, whereas Tsipras and Netanyahu were flanked by (allegedly more junior) ministers Gilad Erdan and Ofir Akounis. A furious and offended Katz left the room.

The next day, at a meeting of the Knesset’s Economic Affairs committee to debate reforms in automotive-related legislation, Katz warned that a compensation package for taxi drivers who are hurt by Uber would cost 8 billion to 9 billion shekels ($2 billion to 2.25 billion). Later in the week, independent journalist Tomer Avital, writing in a blog titled “100 Days of Transparency,” posted a photo of Katz standing next to Avraham Fried, head of the umbrella organization of Israel’s taxi drivers. Fried is also chairman of the Likud branch in the town of Tirat Hacarmel. The photo was taken at the circumcision ceremony for the grandson of a senior Likud activist on the weekend before the Uber fight. Netanyahu’s office was ecstatic. The real reason for Katz’s opposition to Uber had been exposed: political-personal interests.

Katz’s stormy relations with the prime minister are now precluding any unbiased discussion of licensing Uber in Israel. After all, along with the expected blow to the cab drivers, the service also has advantages. For example, it could make the private transportation system accessible to disadvantaged Israelis or young people who cannot afford cab fare. A businesslike discussion of the subject could have resulted in compromise solutions, including a suitable compensation mechanism for the taxi drivers.

For now, Katz has no intention of backing down. A photo with Fried is not a violation of the law, and the cab drivers who signed up en masse as Likud members did so in order for their interests to be represented, and that, too, is legitimate. One can only hope that the prime minister can overcome his personal feud with Katz and deal with the issue of Uber operations in Israel in a businesslike and statesman-like manner, stemming from his government’s belief in the need for competitiveness. If the basic point of departure is that such enterprises cannot be stopped in countries like Israel, expressing as they do a spirit of progress and encouraging competition, an appropriate compensation mechanism must be found for the taxi drivers. This will happen only if Katz keeps standing up firmly to Netanyahu.

The question is whether the successful minister of transportation will also survive the political hazing that Netanyahu has in store for him. Other top ministers like Gideon Saar and Moshe Kahlon, who found themselves in similar circumstances, could not stand it and walked out. Saar walked out of his position; Kahlon walked out of the Likud Party. Katz seems to be made of sturdier stuff. After all, he managed to stand up to powerful union leaders like Alon Hassan, the former head of the Ashdod port workers union, and lived to tell the tale. The public would be well served if Katz escapes a similar fate to that of Kahlon and Saar.