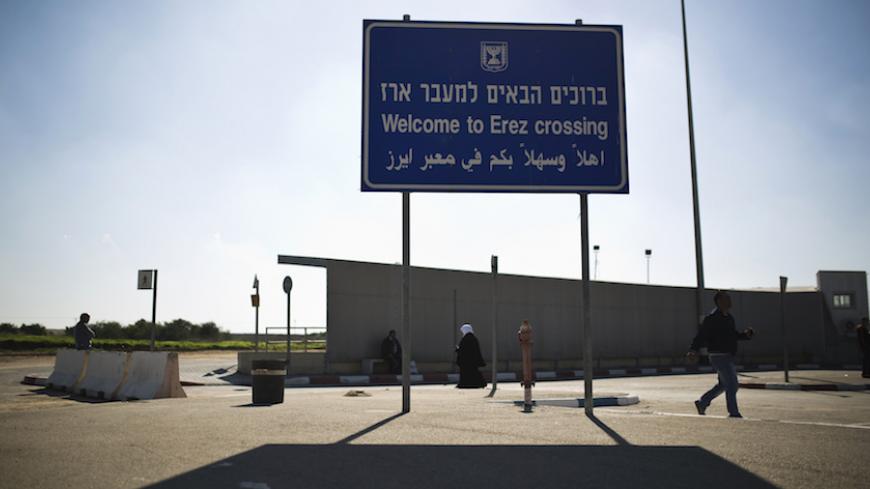 A sign is seen at the Erez border crossing between Israel and northern Gaza Strip, Dec. 28, 2014. - REUTERS/Amir Cohen

If even Education Minister Naftali Bennett, the most right-wing member of Prime Minister Benjamin Netanyahu’s government, has reached the conclusion that the siege on the Gaza Strip should be lifted, we can only wonder: What is actually delaying Netanyahu? After all, lifting the siege would be an easy and wise move on the part of Israel.

In a Jan. 19 speech at the conference of the Institute for National Security Studies, Bennett harshly criticized Netanyahu and Defense Minister Moshe Ya’alon and accused them of a “conceptual freeze.” Bennett presented the Gaza Strip as an example and said, “After all, you won’t suspect that I’m a lefty, God forbid, but are we doing the right thing in Gaza? Wouldn’t it be better to reconcile with reality and disengage from our responsibility for the Gazans, open new paths in their lives with proper security oversight?”

Naturally, the response of the criticized came quickly. Netanyahu and Ya’alon responded with scorn, but sources in the prime minister’s office revealed that the subject was examined in meetings of the diplomatic-security Cabinet. Bennett is a “copycat,” it was claimed among those close to Netanyahu. They were reported as saying, “He hears ideas and analyses in meetings with the prime minister and presents them as if they’re his own.” If this is true, the obvious conclusion is that the prime minister also believes that a new path of life should be granted to residents of the Strip.

Netanyahu is not the one who placed the siege on Gaza. He inherited the situation from his predecessor, Prime Minister Ehud Olmert, but he has sustained it.

Olmert’s main assumption and that of the security establishment in his day was that a siege on Gaza would pressure Hamas and lead the heads of the movement, which took over Gaza by force, to give up their rule. This forecast hasn’t transpired. Hamas has not only not given up its rule and the sovereignty it created in the strip, but sought to lift the siege by force after the many diplomatic efforts and messages to Israel fell on deaf ears, as far as it was concerned.

The siege on nearly 2 million residents in the Gaza Strip, who live under horrific conditions, has continued for eight and a half years. Remember that the United Nations declared that Gaza may become uninhabitable by 2020 — four years from now.

As the siege continued, the Strip became not only a difficult humanitarian problem but also a bigger security threat to Israel. Two million residents lacking a livelihood or future, including youths who have nothing to lose, are a ticking human time bomb.

The youth of Gaza are far more depressed and hopeless than the West Bank youths who in recent months have carried out an individual intifada. What would Israel do if tens of thousands of despairing young men and women from Gaza climbed the fence surrounding the Strip, unarmed? How would the military force surrounding it react? What deterrence could be used against them?

During his rule, Netanyahu has been forced to ease the siege more than once. The first time, which was traumatic for Israel, was after the bloody flotilla incident with the Turkish ship Mavi Marmara, which sought to break through the siege. In order to pacify angry Turks, at the height of the crisis Netanyahu promised to allow the passage of more goods into the Gaza Strip, to grant a “basket of benefits” to lessen the pressure on Israel. That same basket of benefits, before the flotilla, was considered a security risk to Israel.

Later, two violent conflicts erupted in Gaza (Operation Pillar of Defense in 2012 and Operation Protective Edge in 2014), mostly because Hamas tried to bring Israel to the negotiation table and remove the siege by force. As we know, Hamas failed and the destruction in Gaza was enormous, but Hamas was promised in the cease-fire agreement talks that took place in Cairo in 2014 that there would be further easing of the siege, in an increase of the “basket of goods” that Israel would allow to enter Gaza.

But it wasn’t only international pressure that led Netanyahu and Ya’alon to agree to ease the siege by allowing the importation of building materials, fuel, basic products and other goods that were previously forbidden to enter the Strip.

The Israel Defense Forces and the security establishment have warned more than once that the humanitarian situation in Gaza is deteriorating. In July of last year, senior IDF officers recommended partially opening the crossings into the Strip. Their main concern was and remains the impossible situation in the Gaza Strip and its disastrous effects, but not one of them dared to argue what is clear to everyone: The siege on the Gaza Strip has been a colossal failure. The time has come to own up to the mistake that has caused enormous loss of life as well as great damage to Israel's international image.

Now that we have discovered that even Bennett supports a “route recalibration,” in his words, and the development of a new line of thinking regarding Gaza, we should make the necessary move and lift the siege, before Israel is forced to do so under conditions determined by others.

Recently it became known that in the contacts regarding reconciliation between Ankara and Jerusalem, Turkish President Recep Tayyip Erdogan insisted that Israel end the siege on the Strip as a main condition for the normalization of relations between the two countries. Israel needs Turkey and Turkey needs Israel as allies in the new reality of the Middle East. It seems that sooner or later Israel will have to give up on the issue of Gaza, and Erdogan will be considered the hero who lifted the siege.

“We must create an innovative security understanding that is creative and clear. We have to update our outlook, not only our weapons,” Bennett advised in his speech, and became the target of loads of ridicule from Ya'alon and Netanyahu. But if (almost) everyone has already been convinced — from the security establishment to the most right-wing member of the government — that the siege on Gaza has failed and does not guarantee security for Israel, they just might be right.

So what is stopping the government from making a decision that would benefit Palestinians in Gaza, remove international pressure and be efficient from a security standpoint? Israel wallowed in the Lebanese quagmire for nearly two decades in the belief that the security strip in south Lebanon was essential to its security, until it admitted its mistake and withdrew. It’s time to admit that the siege on Gaza is not necessary to Israel’s security, but quite the opposite.