As calm prevails for now on the Gaza border, Palestinian activists have turned to both peaceful and violent modes of resistance. 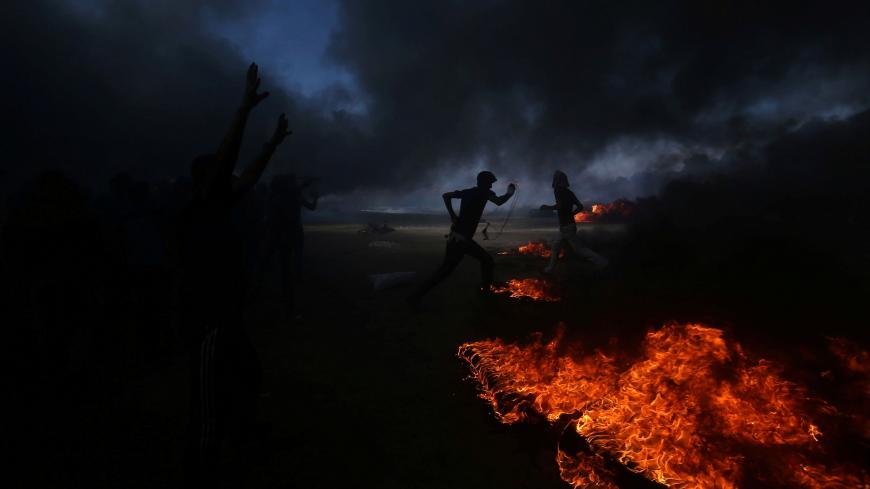 Palestinian demonstrators run during a protest marking the 70th anniversary of the Nakba at the Israel-Gaza border in the southern Gaza Strip, May 15, 2018. - REUTERS/Ibraheem Abu Mustafa

"We will settle accounts with Hamas, Islamic Jihad and the rest of the terrorists operating against us from the Gaza Strip," Israeli Defense Minister Avigdor Liberman warned June 4. He said 600 burning kites had come from the Gaza Strip into Israel since the end of March. Only 400 had been intercepted, and the remaining 200 had burned more than 2,200 acres of farmland and forest in Israel, he said.

Violence escalated along the Gaza Strip border with Israel beginning March 30, when Palestinians began the Great Return March to call for their right to return to lands expropriated by Israel. The protesters are also seeking to end Israel's devastating 11-year blockade on the Gaza Strip.

The demonstrations will continue, Hamas political bureau member Khalil al-Hayya vowed in a May 31 interview on Al-Aqsa TV.

“The return marches will not stop until [the protesters] achieve their goals of indefinitely breaking the siege on Gaza and making the world aware that there are refugees who want to return to their country,” he said. He spoke of several ideas to address the Gaza Strip situation “that aren't ripe yet” but “will be presented to the entire nation.”

Despite the rising number of Palestinian casualties in the marches, mainly in the bloody clashes on May 14, Hamas leaders such as Hayya and the head of Hamas' political bureau, Ismail Haniyeh, spoke of Arab and regional initiatives to lift the siege and calm the situation in the Gaza Strip. Yet so far, nothing has managed to ease the blockade.

Haniyeh mentioned May 18 at the Friday sermon in the Great Mosque of Gaza that serious diplomatic and political efforts are being made to lift the siege on Gaza and open the Rafah border crossing “thanks to the steadfastness and sacrifices of Palestinians.”

On May 29, Egyptian contacts succeeded in instilling a new calm, following a May 27-28 escalation that saw intensive Israeli shelling and rockets fired from Gaza. That violence came after Israel targeted a Hamas surveillance point on the border east of Rafah. Islamic Jihad and Hamas' military wing reported several deaths among their forces.

“We have the right to confront occupation by popular, peaceful and military means. This is what occupied peoples of the world have done to counter occupation,” Hayya said in his interview, commenting on the recent armed resistance activity against Israel.

Meanwhile, Ibrahim Madhoun, a political analyst close to Hamas, told Al-Monitor Israel is not engaging seriously with proposals from Egypt, Turkey, Qatar and others to ease the siege on Gaza.

"Israel, rather, wants to maintain the siege and corner Hamas, while betting on the time factor. So far, the siege continues and the current diplomatic and political activity has yet to bring serious solutions to the Gaza Strip. It rather aims to maintain the status quo and tame the marches of return," Madhoun told Al-Monitor.

However, political analyst Talal Okal has a different opinion. “Hamas' talk about a deal, or its offer to ease the humanitarian situation in Gaza, confirms that a long-term truce with Israel is underway, but is being prepared in secret under Arab and international auspices,” he told Al-Monitor. “Both sides are trying to exert maximum pressure so as to reap the best gains they can get from this deal.”

Since the most recent flareup, the Palestinian resistance has refrained from direct armed confrontations. However, the National Committee to Break the Siege (NCBS) has continued preparing for the commemoration of the Naksa, when Israel took over the West Bank and Gaza as well as East Jerusalem in 1967. (This year, Hamas has moved the observance to June 8 from the actual anniversary of June 5.) There are also plans to launch a second flotilla from the Gaza port in the coming days. On May 29, the Israeli navy stopped the first Palestinian flotilla organized by the NCBS. Israel detained 17 activists but released them later that day through the Erez border crossing,

Mukhaimar Abu Saada, a political science professor at Al-Azhar University, told Al-Monitor, “I don't expect the events scheduled for June 8 to be as bloody as May 14. Hamas isn't interested in more casualties, amid the medical deprivation plaguing the Gaza Strip and in light of the International Committee of the Red Cross [ICRC] warnings on May 31.”

The ICRC had noted in a press release that the Gaza Strip is facing an "epic" crisis and said it was “sending two surgical teams, additional medical specialists and an influx of supplies to fortify medical facilities struggling to assist residents affected by the recent violence.”

Since the return marches began March 30, thousands of Palestinians have been injured and more than 110 killed.

Talal Abu Zarifa, a senior member of NCBS and a member of the political bureau of the Democratic Front for the Liberation of Palestine, told Al-Monitor, “Palestinian factions and activists gave various analyses of the return marches after May 14. The various factions in the NCBS agreed on measures to reduce the number of Palestinian casualties.”

He added, “The analyses carried out by the factions focused on continued popular support for the marches, without calls to breach the separation fence on the border, which has led to increased casualties and injuries. It was also agreed to prohibit any armed demonstrations, so as not to give pretexts to Israel to target protesters.”

He said Hamas has yet to offer NCBS any new initiatives to break the siege, but “we will continue our struggle."

Salah Abdel Ati, an NCBS legal committee member, told Al-Monitor, “Protests are ongoing and protesters will keep swarming to border camps. It was agreed to deploy Palestinian youths at several points instead of stationing them around one point near the separation fence to reduce casualties and injuries.”

Meanwhile, march organizers are anticipating the early July arrival in Gaza of the Freedom Flotilla from Lisbon, Portugal. Al-Monitor confirmed the plans with London-based activist Zaher Birawi, who heads the coordinating committee of the Great Return March and also leads the International Committee to Break the Siege on Gaza.

The international Freedom Flotilla Coalition has organized all of the maritime resistance movements since the original in 2010. On May 31 of that year, the Turkish ship Mavi Marmara, part of the original Freedom Flotilla that headed to Gaza to deliver aid, was stopped by the Israeli navy. Clashes erupted, leading to the death of nine solidarity activists and the detention of 581 others at the port of Ashdod.

“If the return marches and the solidarity ships fail to break the siege, then the last choice will be a direct confrontation with Israel or great chaos in which Palestinian central forces will lose control over the security conditions in Gaza,” said political analyst Madhoun.