Who is sending Iraqi fighters to Syria?

Mystery continues to surround the flow of Iraqi Shiite fighters combating the Islamic State in Syria alongside the Syrian regime, while the Popular Mobilization Units denies involvement. 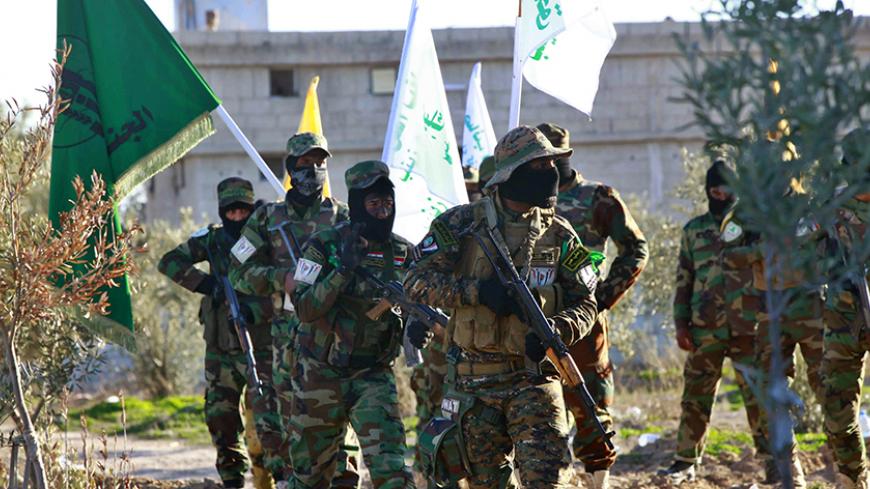 Iraqi Shiite fighters participate in a military-style training at a camp on the outskirts of Damascus, Feb. 13, 2014.

BAGHDAD — Abdullah Hamrani (a pseudonym) stood among his friends in Baghdad, filling them in on his experiences fighting in armed Iraqi Shiite factions, such as the Hezbollah al-Nujaba movement in Syria against the Islamic State (IS) and Jabhat al-Nusra.

Speaking like a preacher, Hamrani gave hope to his friends who gathered to hear the latest developments in the ongoing battles in Syria since November, especially in Damascus and Aleppo. Hamrani proudly told them Shiite factions are progressing very quickly and will soon defeat their enemies. He also stressed that the sacred religious shrines in Syria are now safe from any jihadi organization's attacks.

Iraq's constitution prohibits interfering in other countries' internal affairs. Iraq has denied any official involvement in sending fighters to Syria.

Al-Monitor met with Hamrani in Baghdad and asked him how he made his way to Syria, how he spent his days there and what difficulties he faced.

Hamrani, who seemed reluctant to share details about his trips to Syria, said, “I go to Syria in the ordinary way. I often book a plane ticket from Baghdad to Damascus and go to Syria to join my battalion, only to return to Baghdad when I am off duty.” He would not answer all of our questions. He did not mention the name of his battalion, the faction he belongs to or how he goes to Syria when he doesn't go by plane.

Hamrani’s reticence was his way to hide what has become known and what can no longer be concealed, namely that Iraqi fighters are going to Syria. Hamrani was also trying to hide the name of the factions behind the recruitment of young Iraqi Shiites.

The Nujaba radio station, affiliated with the Hezbollah al-Nujaba movement led by Shiite Sheikh Akram al-Kaabi, broadcasts an ad several times a day calling on the zealous youth wanting to “volunteer for the defense of the holy sites in Syria” to join the movement. A phone number is provided at the end of the ad.

The Hezbollah al-Nujaba movement is fighting along with the Syrian army in a number of Syrian areas, particularly Aleppo, and it publishes a daily report on its website on the progress of the fighting there. The movement is also fighting in the ranks of Iraq's Popular Mobilization Units in a number of IS-controlled areas in Iraq, such as the Salahuddin province.

But a Popular Mobilization Units spokesman, Karim al-Nuri, told Al-Monitor his group is not sending fighters to Syria, as the group's activities are restricted to Iraq. The Popular Mobilization Units — a group affiliated with Iraqi Prime Minister Haider al-Abadi — "has nothing to do with Shiite fighters going to Syria." Rather, he said, independent armed factions are sending fighters there. However, his statement confirms the presence of Iraqi Shiite factions fighting in Syria.

Given Iraqi officials’ secrecy about the matter, any statistics regarding the number of Iraqi armed factions fighting in Syria are considered far from reliable; the number of actual fighters is impossible to ascertain.

“We have no statistics about the Iraqi fighters in Syria,” Nuri said. However, “[Iraqi] fighters, along with the Lebanese Hezbollah militants, have a great positive impact on the course of the war against IS in Syria,” he added.

In October 2013, Al-Monitor learned from a source knowledgeable about armed factions that 14 Shiite factions were fighting in Syria. Now, however, the same source would only say that “the number of [Iraqi] factions has decreased because the war on terrorism has moved here — to Iraq.”

IS has been controlling a number of Iraqi cities since June 2014. The area controlled by the extremist organization is estimated to be about one-third of the country.

For more than a year, Iraq’s security forces, including the army and the police, in addition to the armed Shiite factions as well as Sunni tribes, have been fighting a bloody war on several fronts to retake control of territories from IS.

Some of these battles successfully gained control of villages and regions in Diyala province north of Baghdad and several cities in Salahuddin, including Tikrit. The biggest victory, however, was achieved Dec. 28 when they regained most of Ramadi, the center of Anbar province. That victory helped renew trust in the army and police in keeping terrorism at bay.

Turki denied knowing about “volunteers fighting in Syria,” but said he is “confident that the Popular Mobilization Units has nothing to do with sending fighters to Syria.”

Turki told Al-Monitor, “Some might consider that IS has entered Iraq through the Syrian Gates [the Belen Pass in the mountains of Turkey] and, therefore, it should be fought at the source.”

Hakem al-Zameli, head of the Iraqi parliament’s Security and Defense Committee, told Al-Monitor, “Despite the importance of Syria for Iraq in terms of strategic geographical position, extended borders that link it to Iraq and Iraq's security stability, efforts are concentrated to fight IS in the usurped areas of Iraq.”

Whatever factions might be recruiting Iraqi fighters to go to Syria would be wise to concentrate on Iraq instead, he said. "Defending sacred sites starts in Iraq,” he added.

Zameli further stressed that “calls for volunteers fighting in Syria are illegal and are punishable by law."

"Article 8 of the Iraqi Constitution sets forth that Iraq shall observe the principles of a good neighbor and adhere to the principle of non-interference in the internal affairs of other states." He did note, "However, the situation in Iraq now is exceptional.”

Zameli is known to have figures and details on the security situation because of his position. However, he said, “There are no accurate statistics or details about the numbers of Iraqi fighters in Syria.” He then categorically denied the existence of any “coordination between these factions and official [Iraqi] authorities.”