Although the Popular Mobilization Units grouping has been accused of seizing the homes of Baghdad’s Christians, the organization is leading a campaign to recover the properties. 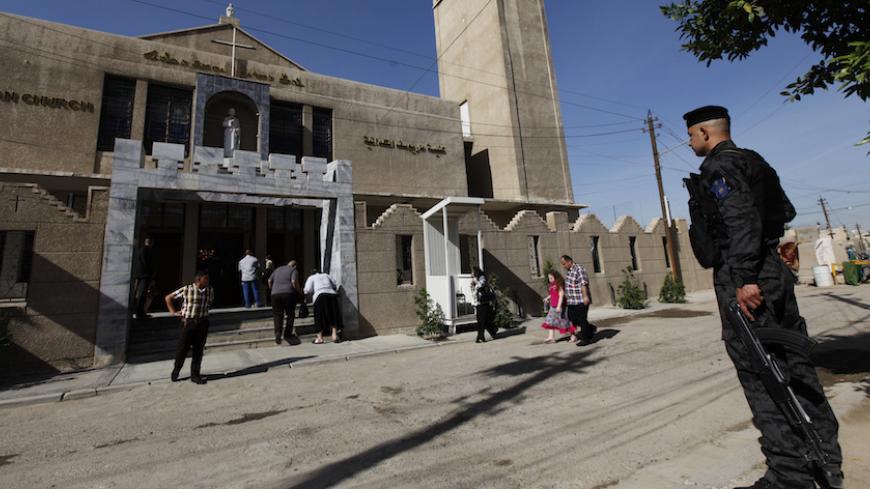 BAGHDAD — Iraq's Popular Mobilization Units grouping is taking much of the heat for the seizure of Christians’ properties in Baghdad and other provinces. But the organization is trying to counter the claims by tackling the problem itself.

Hakem al-Zameli, head of the Iraqi parliament’s Security and Defense Committee, has accused Christian members of the Popular Mobilization Units of appropriating the property.

“A Christian individual claiming to be affiliated with the Popular Mobilization Units is seizing homes and blackmailing the owners," Zameli said in a Feb. 18 press conference. “The chief investigator was asked to follow up on this person to limit the seizure of the property of Christians or other minorities."

“These accusations are not true. We wish Zameli had accurate information before making [such] accusations,” Nuri told Al-Monitor. “Weak souls have seized the homes and properties of Christians in Baghdad, and some of them have forged ownership documents with the help of some officials in state institutions.”

In response to the allegations, the Popular Mobilization Units helped launch a campaign in February to take back the property.

“The Popular Mobilization Units, in collaboration with the Baghdad Operations Command, are participating in a campaign to recover all the Christians’ usurped properties, in order to restore the state’s authority, enforce the law and encourage Christians who have fled or emigrated to return to their homes," Nuri said.

“After we complete the recovery of the seized Christian homes in Baghdad, we will launch a similar campaign in Basra, in a bid to end to the accusations."

The problem reflects the security chaos prevailing in Iraq since 2003. This situation has pushed large numbers of Christians and other minorities, such as Sabians and Yazidis, who were threatened by extremist armed groups, to migrate.

Nuri said he does not have statistics on the number of properties involved, but noted, “There are dozens of seized homes and the Popular Mobilization Units’ leadership keeps receiving complaints from Christians ... for us to take the legal measures and recover their homes.”

“Large numbers of Iraqi Christians are migrating as a result of the security situation in the country. In order to protect their property and titles from being manipulated or forged, Minister of Justice Haider al-Zameli instructed all real estate registration departments to take strict measures when it comes to real estate procedures for Christians," the ministry said in an Oct. 5 statement.

“In case a document to sell a Christian property is presented, the seller himself should be present, or an immediate relative (husband, wife, children) or a secondary relative (brother, sister). In addition, an on-site inspection of the property is required to double-check the ownership."

Applications to sell or acquire property by mail must include documents proving ownership.

But the paper trail has failed, according to parliament member Yonadam Kanna, secretary-general of the Assyrian Democratic Movement. Kanna told London-based al-Hayat paper Feb. 6 that “mafias and militias” claiming to be affiliated with the Popular Mobilization Units and religious parties continue to forcibly seize Christian properties.

Rayan al-Kaldani, a member of the Christian adjudicating committee in the Popular Mobilization Units, told Al-Monitor that the Christian Movement in Iraq — the political party that formed the armed Babylon Brigade — has created a special office to receive complaints about seized property.

“So far, the campaign to recover the Christians’ property has been taking legal and peaceful steps," he said. "I can assure you that those who seized Christian homes and claimed to be members of the Popular Mobilization Units are liars and have nothing to do with us. There are people trying to distort the Popular Mobilization Units’ image and accuse its members of seizing the property of citizens.”

Kaldani, who leads the Babylon Brigade, pointed out, “The campaign to recover the properties will not be limited to evacuating the violators from the homes they have seized. We will arrest and prosecute them, regardless of their positions and their alleged affiliations with political parties.”

Seizing the property of minorities in Iraq, or even public property, is not unusual. Ordinary citizens seize state property and build shops or houses, while senior government officials confiscate mansions and real estate.

Although there are no official statistics on the number of Christian properties that have been seized in Iraq, the Chaldean Patriarchate on Aug. 30 handed over to the Baghdad Operations Command 14 titles of Chaldean Christians whose homes had been seized within a few months.

It is worth noting that the number of Christians who have migrated from Iraq since 2003 is estimated at more than 900,000.