What is Abadi doing to protect Iraq’s Christians?

The Islamic State is known for forcing Iraq's Christians out of their homes, but the terror group did not start the ugly trend. 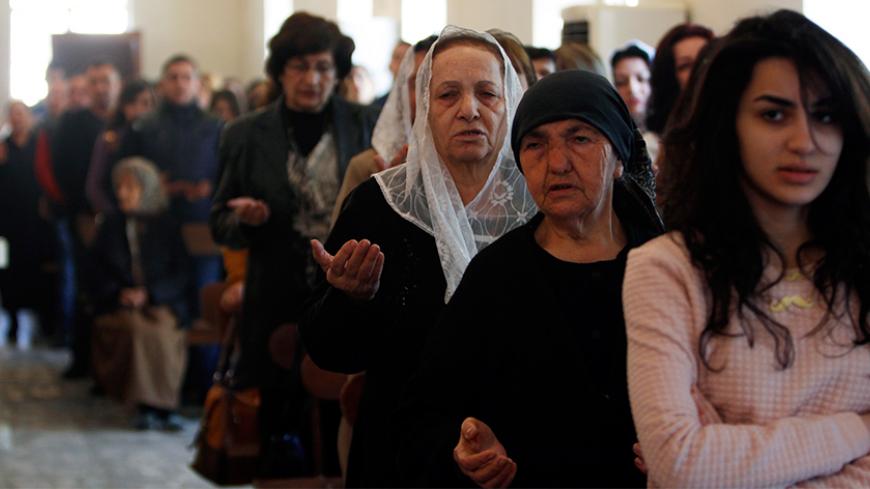 Chaldean Catholic Patriarch of Babylon Louis Sako boycotted the National Conference on the Protection of Peaceful Coexistence, the Ban of Hatred and the Fight against Terrorism and Extremism held in the Iraqi parliament Feb. 7. Sako thought it was “useless to participate in conferences of slogans and mere talk that do not result in effective measures on the ground.”

Sako, the head of the Chaldean Catholic Church, seemed angry at the government's failure to take steps to protect Iraq’s Christians, 120,000 of whom were displaced and whose properties in Islamic State-controlled Mosul were confiscated in June 2014. The Christians’ plight was also overlooked in Baghdad, where influential parties took over their residences.

On Feb. 5, Sako pleaded in a public statement, “I call on the conscience of officials in the Iraqi government and on religious authorities to take actions that preserve people’s lives, dignity and properties, regardless of their identity. They are humans and Iraqis.” He went so far as to say, “Practices against Christians are against religious messages and can be classified as genocide of a different type.”

Perhaps Sako could not come out and say directly that Christians were being displaced and their houses stolen in Baghdad, as his status as a religious leader obliges him to be diplomatic. But in a June 2015 television interview, Mohammed al-Rubaie, a member of Baghdad’s provincial council, shared statistics showing that influential parties had taken control of 70% of the houses of Christians who were displaced from Baghdad to destinations outside Iraq. Rubaie added that these influential parties managed to change the ownership of the houses in the government’s real estate records to the names of influential people.

Other Iraqis including Sunnis, Shiites, Yazidis and Sabians are generally sympathetic to the Christians, as they are considered part of a peaceful and civil sect in Iraq. They expressed solidarity with Christians and objected to the confiscation of their houses.

However, Rubaie’s announcement shocked Iraqi society and sparked a debate between Prime Minister Haider al-Abadi and Christian politicians. One of them, Imad Youkhana, said in July 2015, “Prime Minister Abadi promised to put an end to all violations [against Christians] and give the homes back to their original owners, but he has failed to do so.”

Youkhana accused "illegal religious parties and militias" of "seizing the homes of Christians in Baghdad, kidnapping them and threatening them.” He noted that the situation in the capital is “leading to ethnic cleansing and demographic change.”

The political parties and the government are well aware of these practices, but something seems to be preventing the government and security forces from protecting the property of Christians who have been present in Iraq for thousands of years.

Yonadam Kanna, chairman of the Rafidain Christian parliamentary bloc, told Al-Monitor, “Militias affiliated with political parties are trying to eliminate Christians from Baghdad and seizing their property by force.” He stressed, “The government is well aware of these violations but it is not doing anything about it.”

He went on, “Those gangs continue to seize the property of Christians, and according to the information I have received, dozens of homes were seized, but I am sure the number is much higher as certain families left immediately after their homes were seized without filing a complaint or reporting anything, fearing for their lives. The seized homes are often empty homes whose owners have already left. But in some cases, the [gangs] threaten to kill the owners and they seize the homes while the families are still living there.”

Milad Majid (a pseudonym) told Al-Monitor over Skype about the threats that pushed him to escape to the Iraqi Kurdistan Region and then displaced him permanently to the United States. He said, “I lived in Al-Ghadeer, Baghdad, and I was harassed by armed groups many times. They called me ‘nasrani’ [Arabic for "Christian"] and 'mushrik’ ["polytheist"] and repeatedly asked me to sell them my house.”

These threats scared Majid, but he did not report them to the police. He said, “I was afraid. When did the police ever protect the citizens? The militia might have discovered I called the police, and they would have killed me.”

Majid said the threats pushed him to evacuate his house and rent it out to a poor Iraqi family. But the militia soon threatened the tenants as well and forced them to leave the house so they could confiscate it. He added, “I found out later from my relatives that they claimed ownership of the house in the government’s real estate records and sold it. This is how I lost the house where I was born. I do not know if I will ever get it back.”

Majid did not want to reveal his real name or that of the militia that threatened him because he feared for his relatives who are still in Baghdad. He explained, “I am not the only Christian who faced such incidents. Since the fall of Baghdad in 2003, Christians have been telling their stories about loss of property and threats.”

Kanna said, “The ownership of many Christian properties is changed in the Iraqi real estate registry and transferred to armed groups via bribery. This act of fraud costs $10,000.”

The emigration of Christians from Iraq increased after the US invasion in April 2003 in response to the threat posed by Sunni and Shiite Islamic militias. As a result, their numbers dropped from 1.5 million to about 850,000 people in 2012. This number, too, is likely to have significantly dropped over the past few years, especially after the Islamic State took over a third of the country in June 2014 and marked the houses of Christians with the Arabic letter “n” for “nasara,” a pejorative Arabic term for Christians, for confiscation. There are no reliable statistics on the Christians still in the country today.

Shakhwan Abdullah, the parliamentary security and defense committee's rapporteur, told Al-Monitor, “The committee has addressed a letter to Iraqi Prime Minister Abadi, asking him to open an investigation regarding the seized homes to find out which parties are behind it and prosecute the perpetrators.”

Abdullah did not mention when the letter was sent, but said, “Abadi promised to open an investigation to determine the parties seizing the homes of Christians and falsifying official papers in the real estate department.” He noted, “The perpetrators are not individuals; they are influential parties in the government trying to exploit their position.”

However, Abadi’s government has yet to give a serious response to the calls by clerics and Christian officials for them to protect Christians and urge them to stay in Iraq.

Meanwhile, Abadi, who met Pope Francis at the Vatican on Feb. 10, seems to be making promises but not actually implementing them. “Our Christian brothers in Iraq are the center of our pride and love and we are keen to take care of them, protect them and make sure they are free to practice their religious rituals,” Abadi told the pope.

These words were a mere courtesy, and Christians are no longer looking for reassurance. They are now waiting for practical measures to punish those who seized their homes and sought to displace them.