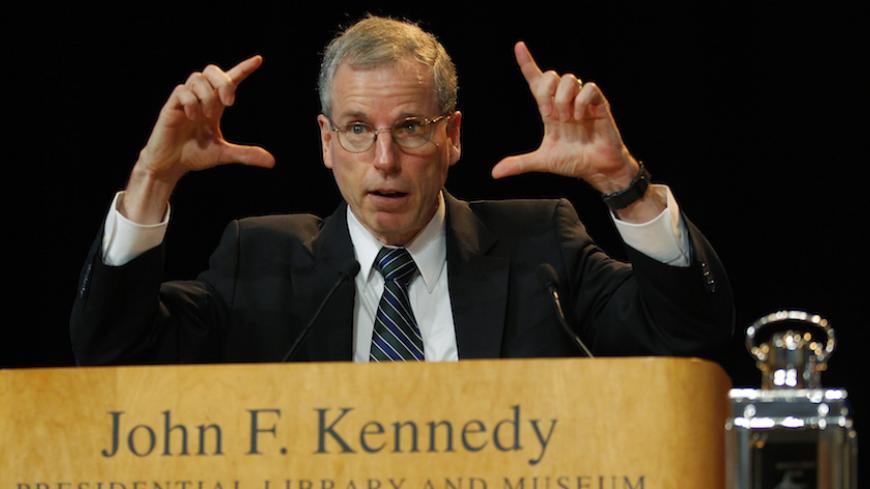 Robert Ford speaks after receiving a 2012 John F. Kennedy Profile in Courage award when he was US ambassador to Syria, during ceremonies at the John F. Kennedy Library in Boston, May 7, 2012. - REUTERS/Brian Snyder/Files

Rock-bottom oil prices are ravaging Iraq's ability to combat the Islamic State (IS), former US Ambassador to Syria Robert Ford told Congress at a Jan. 12 hearing.

Ford's warning was one of several ominous messages from a trio of former Obama administration officials who painted a far less rosy picture of the fight against IS than the one expected a few hours later in the president's final State of the Union address. Ford told the House Armed Services Committee that the Iraqis' financial woes are the biggest challenge, along with sectarian strife, to defeating IS.

"Both the Iraqi government in Baghdad and the Kurdish regional government in Erbil are heavily dependent on oil, and oil sales," Ford said. "And low oil prices are really crunching their ability to mobilize resources in the fight against the Islamic State."

Some peshmerga fighters hadn't been paid in three months when he visited a few months ago, Ford said. Baghdad, meanwhile, is 95% dependent on oil revenue and based its FY 2016 budget on a $45-per-barrel price — almost 50% higher than the $31, 12-year-low recorded Jan. 11.

"He is right about being unable to pay," confirmed Karwan Zebari, the director of political and diplomatic affairs for the Kurdistan Regional Government's Washington office.

The Obama administration says it is well aware of Iraq's difficulties and has been helping the government not only stay afloat but also plan for a more diversified economy.

"It has been a very difficult challenge for the Iraqis for some time now, and it continues to be," an administration official told Al-Monitor. "And as the price drops even more, it makes things even more difficult."

The official said the Iraqis have been taking the fight to IS despite their financial woes.

"I don't think that correlates to what we've seen recently on the battlefield," the official said. "If anything, the determination and the offensive capability of the Iraqi forces — we've seen a tremendous amount of improvement and a tremendous will to fight over the past few months."

Just last month, the United States helped Iraq apply for and win a $1.2 billion World Bank loan to help offset the fall in oil prices and the costs of the war against IS. Other efforts have included the suspension of war reparations to Kuwait in December 2014.

The Obama administration has also offered technical assistance to the Iraqis to "get their house in order," the official said, and embedded with the Ministry of Finance. In addition, the United States has contributed about $15 million of a $50 million UN stabilization fund for Ramadi, Tikrit and other cities reclaimed from IS.

The fund helps pay for public works and rehabilitation of light infrastructure, support for reopening businesses, community reconciliation and restoring local governments, the official said. About 90% of the population has returned to Tikrit since its liberation in March, the source said, "and more than 100 businesses have reopened."

More such funding will be requested as more cities get liberated.

"There's a complete acknowledgment that there's going to be a need for more than that," the administration official said.

The administration is looking into other avenues to help Iraq, the source said, but nothing that is far enough along to be discussed publicly.

Former CIA acting Director Michael Morell, who also testified at the Jan. 12 hearing, has previously said that the region's reliance on oil wealth is one of the main reasons why the Obama administration has been reluctant to bomb IS-occupied oil fields and refineries.

"There seemed to have been a judgment that, look, we don’t want to destroy these oil tankers because that’s infrastructure that’s going to be necessary to support the people when [IS] isn’t there anymore, and it’s going to create environmental damage," Morell told Charlie Rose in November. "And we didn’t go after oil wells. We didn’t actually hit any oil wells that [IS] controls because we didn’t want to do environmental damage and we didn’t want to destroy that infrastructure."

Others point out that falling oil prices also undermine IS, which relies on oil sales for a large part of its funding.

"It ultimately also hurts [IS]," said House Foreign Affairs member Gerry Connolly, D-Va. "It's not a 100% wonderful thing, but it ain't all bad either."