Facing oil slump, Iran moves to tax its way out of crisis

Faced with plummeting oil revenues, the Iranian government is taking measures to make up the smaller amount of petrodollars coming in with increased tax revenue. 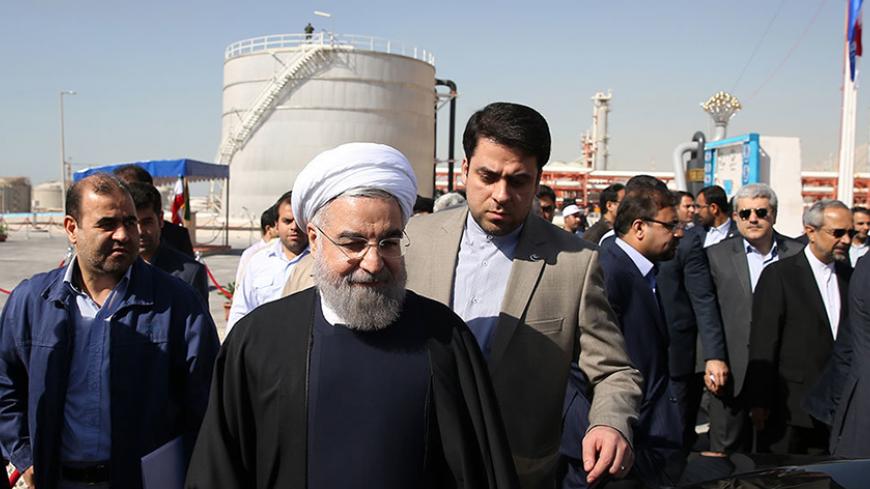 Iran's President Hassan Rouhani is seen during his trip to inaugurate two phases of South Pars gas field, in Assaluyeh, in the southern province of Bushehr, Jan. 12, 2016. - Mehr News Agency

TEHRAN, Iran — Amid warnings by some experts of the possibility of a further slump in oil prices in 2016, crude oil prices briefly hit 12-year lows this week, selling for less than $30 per barrel.

With the imminent lifting of Western sanctions on Iran over its nuclear program, the oil market is anticipating an inflow of Iranian crude in coming weeks. Amid these anticipations, there are also speculations that the already oversupplied market could see prices drop to as low as $20 due to a potential price war between exporters bent on keeping market share.

Iran is in a relatively good position in terms of oil dependency. For instance, in response to the sanctions, the Iranian government initiated efforts to reduce such dependency by focusing on expanding other sources of revenue. Among these measures was the emphasis on the export of non-oil goods, such as the output of the country’s mining and petrochemical industries, to make up for much needed revenues. These efforts appear to have had effect. On Jan. 5, government spokesman Mohammad-Bagher Nobakht told reporters that the dependency of next year’s budget (March 20, 2016-March 20, 2017) on oil revenues will drop to a new low of under 25% — down from highs of nearly 70% only a decade ago.

Another measure the government has been taking is to increase tax revenues. Despite the economic advances Iran has made over the past decades, the country’s economy suffers from an underdeveloped tax system, and financial transparency remains a challenge. Indeed, tax revenues in Iran only account for less than 7% of gross domestic product. However, it should be noted that September 2015 reports said the government’s tax income had exceeded oil revenues for the first time in nearly half a century. This trajectory is widely supported, even in the current, difficult economic climate. “Although increasing taxes during an economic recession would have a negative effect on economic growth and is not recommended, increasing tax revenues through identifying new tax bases is a positive step,” Ali Sadeghien, a university lecturer in Tehran, told Al-Monitor.

Iran’s efforts to maximize tax revenues come at a time when only 40% of the country’s economy pays taxes. Indeed, last month, Ali Tayyebnia, minister for economic affairs and finance, stated that some 43% of the Iranian economy is currently enjoying a wholesale exclusion from paying any taxes. According to Tayyebnia, the government’s low tax revenues stems from the lack of an economic and fiscal database as well as the wide range of tax exemptions granted to a large number of companies and individuals. Moreover, Ali Askari, the former head of Iran’s National Tax Administration, has publicly stated that some 40% of the economy is legally exempt from taxes, while another 20% is made up of underground businesses that the tax authorities are unable to keep under their radar. Amid the government’s stepped-up efforts to boost tax earnings, it is expected that it will generate more revenues from tax as opposed to oil exports in the next Iranian year.

However, while the focus on tax revenues is broadly welcomed as a great achievement, some experts say it will only be effective if it is lasting. “If the government continues this policy when the prices of oil and gas are high again, then we can say it has been successful,” Sadeghien said. “But if the prices go high again and it loosens its pressure to collect taxes, then we’re back to square one.” Allah Mohammad Aghaee, an adviser to Iran’s minister of economic affairs and finance, told Al-Monitor he believes that the country’s tax regime is miles away from where it should be, but that he remains hopeful about the near future.

Tax reforms have been underway for an extended period. Under a project that started back in the 1990s, a major study into some of the best-practiced tax systems was initiated. The studying phase dragged on for more than a decade, but it finally entered the practical phase in 2005 with the cooperation of Deloitte Canada as the project’s main consultant. Later, a French information system company, Bull, was awarded the contract to develop the country’s Integrated Tax System (ITS). The implementation of the ITS, which has since turned into one of the main information technology projects in the country, began in 2010. The system will establish a database of Iranian taxpayers, which would also serve as the foundation of further comprehensive tax reform. “We’ve used the latest technologies for the ITS project, and it has been implemented in accordance with international standards, with the cooperation of major Western companies,” Aghaee told Al-Monitor. He added that the system, which has been implemented in several provinces including Tehran, is expected to be completed by the end of 2018.

Other than the ITS, President Hassan Rouhani’s administration has taken the major step of amending the country’s tax law so that — among others — conglomerates controlled by Iran’s Islamic Revolutionary Guard Corps and religious foundations, such as the Astan Quds Razavi foundation, will start paying taxes from the next Iranian year. There are other important elements to the tax form, too. “Under the new tax law, income tax rates would also be lowered to 15% to 25%, down from the previous 15% to 35%,” Aghaee told Al-Monitor. He added that Iran has sought to expand its tax base under its comprehensive tax plan to boost justice and transparency, and also equal opportunity to compete. Another notable amendment in the new tax law addresses tax evasion and any form of assistance to others to evade taxes, recognizing the latter as a crime for the first time. In this vein, the amendment obliges the judiciary to form special courts for crimes related to tax evasion. Indeed, the Ministry of Intelligence announced on Jan. 9 that it has busted a major ring that offered clients advice on how to evade taxes.

Yet despite all these measures, some believe that the low cultural acceptance of the concept of taxes, and a considerable lack of economic knowledge among the public, will continue to prove to be major challenges. Aghaee told Al-Monitor that to lower the risk of a possible backlash against the new tax reforms, the Ministry of Economic Affairs and Finance, along with the economic commissions of both the administration and parliament, has been in close consultation with the private sector and all related nongovernmental organizations during the process of the drafting of the new tax laws.

Although the government has not yet met the deadline to submit the next Iranian year’s budget bill (March 20, 2016-March 20, 2017), there are reports that its tax revenues will reach 860 trillion rial (over $23 billion) in 1395 (2016). Whether this materializes may be less important than the broader efforts to shed dependency on oil in favor of tax reform.