How Tehran plans to crack down on property speculators

Iran has a plan to tax languishing building projects and vacant homes in an effort to curb rampant speculation and raise revenue. 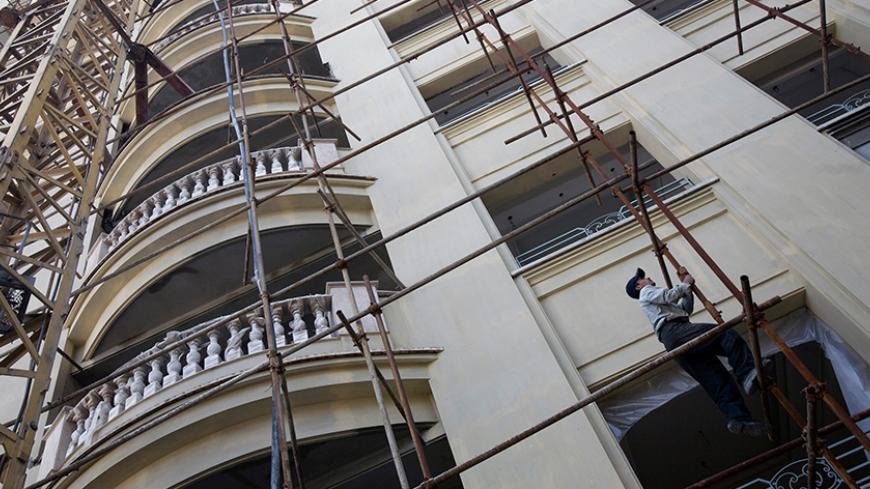 A man works on a residential building currently under construction in northern Tehran, May 17, 2008. - REUTERS/Morteza Nikoubazl

TEHRAN, Iran — Iranian authorities have announced initiatives to tax unfinished residential buildings in Tehran and vacant homes in major cities. The move appears aimed at helping to stimulate demand in the housing market, which has been in a deep recession since summer 2013. Another motive could be to increase tax revenue as the government is expected to face a budget deficit in the Iranian fiscal year running to March 20, 2017, given the weakness in oil prices.

On Feb. 2, the Tehran City Council gave the mayor approval to tax builders who delay finishing construction projects in the metropolis. The so-called suspension tax is expected to free part of the 100 trillion rials ($3.33 billion) in resources tied up in 400,000 construction projects that are underway across the country, according to leading Iranian economic daily Donya-e Eqtesad. The paper, however, has not clarified how many of these unfinished projects are located in Tehran.

Tehran municipality will be allowed as of the next Iranian fiscal year, which begins March 20, to charge speculators up to 1 million rials ($33) per square meter for each month they delay finishing construction projects. The move, which is expected to increase the municipality’s revenue in the coming Iranian year, is seen as an effective way to reduce speculative activity in the housing market. However, some market players say the measure comes too late.

A real estate agent in the Iranian capital who spoke on condition of anonymity told Al-Monitor that the Tehran City Council’s move could have been made far earlier, when the property market slipped into recession more than two years ago. “With the sanctions having been lifted now, speculators will automatically accelerate their activity to free their blocked capital,” the broker told Al-Monitor.

According to a report recently released by the Central Bank of Iran, there were 16,300 transactions in Tehran’s real estate market in the monthlong period ending Jan. 20. The figure was 8.5% higher than the same period in the previous year and 29.1% higher than the previous period. However, prices plunged by 3.1% year-on-year in the review month and 1.9% compared to a month before. Although some analysts believe the recent jump in transactions is related to the implementation of the Joint Comprehensive Plan of Action, Hamed Mazaherian, deputy minister of roads and urban development, says it will take the housing market months to see the positive impact of sanctions relief. He forecasts that the market will start recovering in the second half of the next Iranian year.

Meanwhile, some officials continue to seek to accelerate the recovery of the housing market through disciplinary measures. Late last month, Vice President of National Tax Administration Ghassem Panahi announced that the final implementation of a long-awaited tax on vacant homes in Tehran and other major cities will take place by March 21, 2017. The new law seeks to charge speculators who buy and hoard apartments with no intention of inhabiting them or renting them out, but merely to benefit from the capital gains once property prices rise. Tax officials hope the new tax law, which they have been sitting on for some three years, will help free up at least part of the 1.6 million vacant housing units in Iran.

But how likely is it that the government will be able to establish a huge database of these homes over the coming year? Panahi is confident that the Ministry of Housing and Urban Development will be able to use an already-designed online mechanism to track commercial apartments as well as occupied and vacant homes by March 20, 2017.

In the first year after the implementation of the new law, homeowners who refuse to rent their vacant apartments for a one-year period must pay half of the annual rent of their apartments in tax. The payable tax will double if homeowners continue to keep their apartments vacant for a second year, and triple by the end of the third year.

The tax on vacant homes has not been broadly welcomed, with many property market analysts criticizing it as ineffective. Critics say renting a home in Tehran and other big cities is a great way to earn extra income for many Iranians. Indeed, the majority of homeowners prefer renting out their homes, given the ongoing rise of rents in past years despite a decline in home prices.

The head of the Real Estate Agencies Union in Tehran, Hessam Oghbai, is of the same opinion. In a recent interview with the economic magazine Tejarat-e Farda, he said that the government has to improve the business environment and enhance competition in the housing market if it is serious about reducing the number of vacant homes. He believes that solutions other than raising taxes could work better and calls for a boost in the construction of apartments — though he acknowledges that such taxes could reduce speculative demand in the long run.

More broadly, there is the question of why the Iranian government is moving to impose the property tax so late, even as a majority of analysts predict that it will not result in a significant shift. It appears that the government has adopted a long-term approach toward the growing property industry and is trying to diversify its sources of revenue. Indeed, in the past few months, several foreign real estate investors, including a British one, have shown interest in the property market, an Iranian business consultant who is familiar with the matter told Al-Monitor on the condition of anonymity. Given the promising prospect of an inflow of foreign investment to meet the demand for 1 million housing units per year, the government appears to be planning for the future by using taxation as a tool to shape the decisions of individual homeowners and also impose discipline in the country’s key housing sector.