Iran plans to wean budget off oil income by next year

Iranian officials say the country will kick its dependence on oil revenues by next year, using them only for development projects and to acquire capital assets. 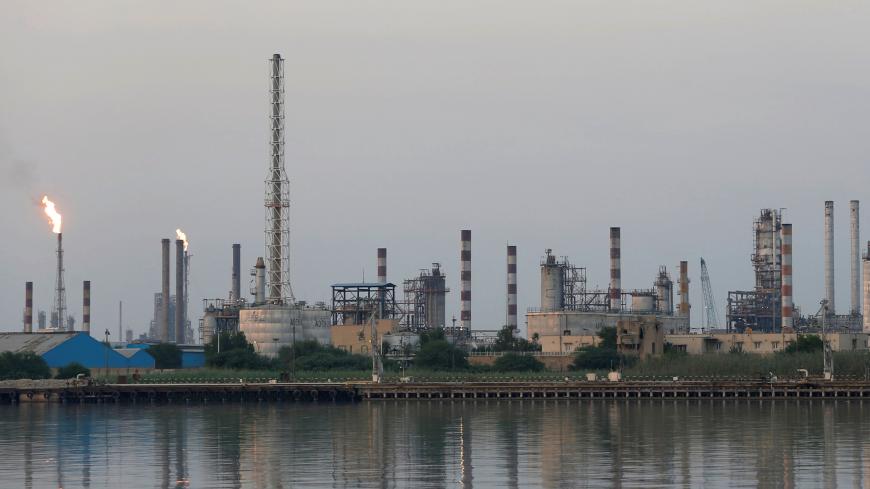 A general view of Abadan oil refinery in southwest Iran, pictured from the Iraqi side of Shatt al-Arab in Al-Faw, south of Basra, Iraq, Sept. 21, 2019. - REUTERS/Essam Al-Sudani

The Iranian government has decided to eliminate its budgetary reliance on oil sales for the fiscal year beginning in March 2020. The administration kickstarted the policy by reducing gasoline subsidies on Nov. 16. This measure is meant to ease budgetary pressures caused by the US maximum pressure campaign on the country's economy, in addition to helping lower-income groups by increasing their cash subsidies.

However, the recent protests across the country proved implementing the policy won't be easy.

Oil funds, especially during the past half-century, have always been a major contributor to Iran’s public budget and expenditures financing. In fact, they paid for 46% of total state costs between 1971 and 2018.

Managing sustainable resources and spending efficiently are the key factors Iran's Planning and Budget Organization (BPO) is pursuing under its budget reform framework to gradually end overdependence on petrodollars. Mohammad Bagher Nobakht, head of that department, noted in an Oct. 9 interview on state TV that the government is bent on compensating for oil revenues being severely hit by US sanctions. Applying new tax laws, reforming hidden energy subsidies and selling off extra government assets are among the steps planned to increase the government’s financial resources, he said.

Iranian law addresses taxes differently for corporations, independent contractors and individuals. For the first two categories, a non-systematic collection system is often used and has sadly resulted in opaque and “creative” balance sheets in recent years. On the other hand, information on government employees is transparent and readily available, so their tax is calculated and deducted before they are paid each month. The real tax burden is largely realized by those under direct supervision of state agencies.

A government employee with a salary of $270 per month pays about $27 in taxes. But tax evasion is so prevalent among the wealthy that, based on rough calculations, gold and steel traders, physicians and lawyers each pay about the same tax as the civil servant — $27 a month.

According to senior economic analyst Mohammad Taqi Fayazi, the government earned almost $11.3 billion in the last fiscal year from tax collection — as calculated by the NIMA online foreign exchange system. Another $5.1 billion came from non-tax sources. This was while oil revenues and debt sales contributed $9.8 billion and $5.1 billion, respectively, to the total budget.

Current costs, civil project expenditures and maturing treasury bills in the same period yielded, respectively, $24.8 billion, $4.2 billion and $2.3 billion. Putting all this data together, the government should have faced a deficit of about $8.4 billion in the previous year, according to Fayazi. But expenditures relevant to redeeming government bonds aren’t included in this equation; it’s assumed they are likely to be financed by issuing new bonds, as has been the case in past years.

Keeping all this in mind and applying the same facts and figures without presuming costs will climb, it’s projected that tax revenues and non-tax incomes combined won’t meet the next fiscal year’s budget costs. This scenario thus raises the question of how the Iranian government can afford its budget gap.

Under the current economic stagnation, experts advise the government not to levy more taxes on Iranian businesses. Indeed, they mostly recommend lowering those taxes. Unfortunately, economic stagnation is not expected to improve reasonably and meaningfully anytime soon. A recent report by the International Monetary Fund reflects that the Iranian economy is expected to shrink by 9.5% this year, with gross domestic product in real terms to stay flat next year.

These days it’s more evident than ever that the most important economic step is to implement energy price reform. But it seems nearly impossible to entirely remove or even significantly modify hidden energy price subsidies, given the economic and social issues that might arise in the aftermath. The recent wide-spread protests witnessed in over 100 cities throughout the country clearly highlight the difficulty of implementing such grandiose economic changes in light of the current critical circumstances.

Furthermore, eliminating tax breaks, broadening the taxation base and levying capital gains taxes — as the BPO suggests — don’t promise to work as new approaches to filling government coffers. This is mostly because new legislation is required to execute such efforts. With the parliamentary elections coming at year’s end, the circumstances necessary for actual adoption of such laws don’t seem likely to occur soon.