Iranian President Hassan Rouhani has made a point of holding top security officials responsible for allowing the attack on the Saudi Embassy. 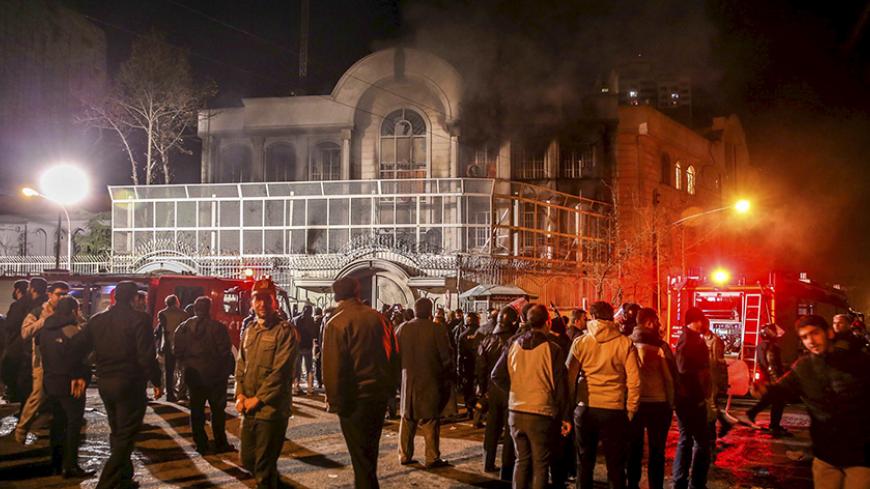 Smoke rises from the Saudi Embassy during a demonstration in Tehran, Jan. 2, 2016. Iranian protesters stormed the embassy in Tehran as Shiite Muslim Iran reacted with fury to Saudi Arabia's execution of a prominent Shiite cleric. - REUTERS
Arash Karami
@@thekarami
January 11, 2016

The crisis over the attack on the Saudi Embassy in Tehran, which at its root was caused by an international rivalry between Iran and Saudi Arabia, may turn out to become a domestic political issue with the upcoming February 2016 parliamentary elections in Iran. The attacks on the embassy in Tehran and consulate in Mashhad over the execution of Shiite activist Nimr al-Nimr not only resulted in Riyadh cutting diplomatic ties with Tehran, but have created challenges for President Hassan Rouhani, who campaigned on reducing tensions with foreign countries.

The immunity that rogue elements have previously enjoyed when disrupting speeches by moderates and Reformists and even attacking embassies is being challenged by a president who has unfulfilled 2013 election campaign promises. This is perhaps one reason why the Rouhani administration has condemned the attackers, gone after the perpetrators and held the officials in charge of security responsible.

On Jan. 9, Hossein Ali Amiri, spokesman for Iran’s Interior Ministry, went on Iranian television and condemned the attacks on the Saudi Embassy. Amiri said that after the execution of Nimr, such an attack was “predictable and the police forces and the intelligence organizations should have planned in such a manner for this not to happen.”

Amiri said the Interior Ministry, upon Rouhani’s orders, has created a special work group to investigate the attack. Amiri said that 60 individuals have been arrested and that their cases will be sent to the judiciary.

The most explosive comment by Amiri was that Safar Ali Baratlou, deputy governor general of Tehran province for security affairs, was fired “in part because of the attacks on the Saudi Embassy.” Amiri added that Baratlou has also previously ignored a number of orders from Interior Minister Abdolreza Rahmani Fazli.

In an interview with Fars News, Baratlou accused the Interior Ministry of lying about the reason given for his removal. He accused the ministry of seeking his ouster after a November attack by rogue elements on Abdolvahed Mousavi Lari, former President Mohammad Khatami’s interior minister. Baratlou was assigned to his position by former president Mahmoud Ahmadinejad.

On Jan. 10, another major removal was announced when Hassan Arabsorkhi, commander of Tehran police special forces, was replaced. No reason has been given yet as to why he was replaced, though many have speculated that it is related to the Saudi Embassy attack. The special forces’ responsibilities include confronting protests.

The Foreign Ministry has also taken steps to push back against the actions of rogue groups in the aftermath of the execution of Nimr. Mojtaba Shakeri, a member of the Tehran city council, said Iran’s Foreign Ministry has opposed renaming a street near the Saudi Embassy after Nimr. Shakeri said that after the execution, protesters changed street signs to read “Martyr Ayatollah Nimr Street.” Shakeri said that when the city council held special meetings to formally change the name, it received the letter from the Foreign Ministry opposing the decision.

Ali Larijani, the speaker of Iran’s parliament, also condemned the attacks on the Saudi Embassy. At an open session of parliament Jan. 10, Larijani, who has become more politically allied with Rouhani in recent years, said, “The attack on the Saudi Embassy was wrong.” He said the Interior Ministry must confront those who were responsible for security but were at fault or negligent in their duties. Larijani said, “The root of this behavior must be removed from the country.”