What does Khamenei think of Saudi Embassy attacks?

Iranian officials have condemned the attack on Saudi Arabia's embassy. 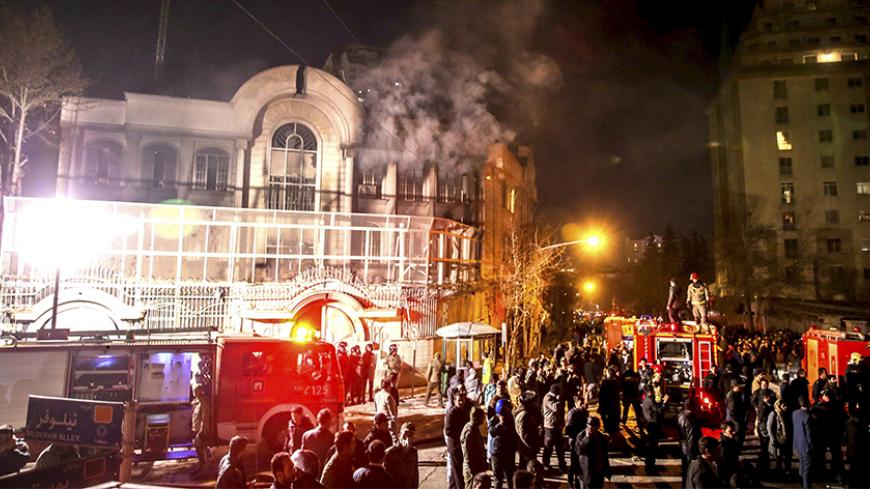 After protesters who were angered at the execution of a prominent Shiite cleric stormed the Saudi Arabian Embassy in Tehran, setting fire to it, a number of Iranian officials have condemned the attack. Many Iranian media outlets also questioned the motives of the embassy attackers, who have once again caused a diplomatic crisis between Iran and a foreign country.

Iranian officials condemned the execution of Nimr al-Nimr, who had advocated for more rights of Saudi Arabia’s Shiite minorities. However, many were quick to also condemn the attack on the Saudi Embassy.

President Hassan Rouhani referred to the embassy attackers as “extremists,” saying that Iran had a legal and religious duty to protect both the Saudi Embassy in Tehran and the consulate in the city of Mashhad. He called their actions “unjustifiable” and asked the judiciary and intelligence ministry to apprehend the attackers so that “this type of ugly act will be put to an end forever.” More than 40 of the attackers have already been arrested.

Ayatollah Ali Akbar Hashemi Rafsanjani condemned the attack, saying that it increases regional tensions and makes finding paths to solutions more difficult. Ayatollah Sadegh Larijani, the head of Iran’s judiciary, said that the attack violates Iran’s legal commitments and diminishes attention on the larger issue of Nimr’s execution. Hamid Baeidinejad, director general for political affairs at Iran’s Foreign Ministry, said that there was no doubt that the attack on the embassy was a mistake.

A number of officials, in an attempt to distance the Iranian government from the act, even suggested that the actions could be the act of “infiltrators,” a term recently being used to signify domestic agents of foreign powers. Grand Ayatollah Naser Makarem Shirazi suggested that infiltrators within the protesters intentionally attacked the embassy to create discord between Shiites and Sunnis. Justice Minister Mostafa Pourmohammadi said that given the number of warnings by the supreme leader against infiltrators, “it’s possible the latest action against the Saudi Embassy could be planned and supported by agents of infiltration.” Hard-line cleric Alireza Panahian also joined the chorus of those questioning the motives of the attackers, saying, “There are suspicions that there are hands that tried to create a sedition.”

It is doubtful that any group will take responsibility for the attack. Many officials simply refer to them as “rogue elements.” The 1979 attack on the US Embassy in Tehran was carried out by leftist students who are mostly Reformists today. Ayatollah Ruhollah Khomeini, the leader of the Iranian Revolution, gave his blessing after the fact. The 2011 attack on the British Embassy in Tehran resulted in its closure for four years. Nine months after that attack, Supreme Leader Ayatollah Ali Khamenei told a group of university students, “The feelings of the youth were correct, but their behavior was not correct.” That attack was supposedly carried out by Basij students, though no official took responsibility and no one was arrested.

Khamenei has so far condemned the execution of Nimr but has not commented on the embassy attack. Some media outlets quoted a 1989 Friday prayers sermon by Khamenei when he was president and a number of protesters had gathered in front of the British Embassy in response to Salman Rushdie’s novel about Islam. At the time, Khamenei had said, “I am communicating this to you as an official of the government, as a Friday prayer leader, as a cleric: Do not get close to embassies. If you do not like the policies of the British or Americans or anyone else, this is not the path for some people to climb over embassy walls and approach embassies.” He added that attacking embassies, climbing over their walls, destroying their property or setting them on fire “is certainly bad and a crime, and if someone intentionally does this it is treason.”