Will Egypt be able to dredge up support for new Suez canal?

Officials say they are confident the new Suez Canal will be a moneymaker, but they’re working hard to promote it with an eye on its competition. 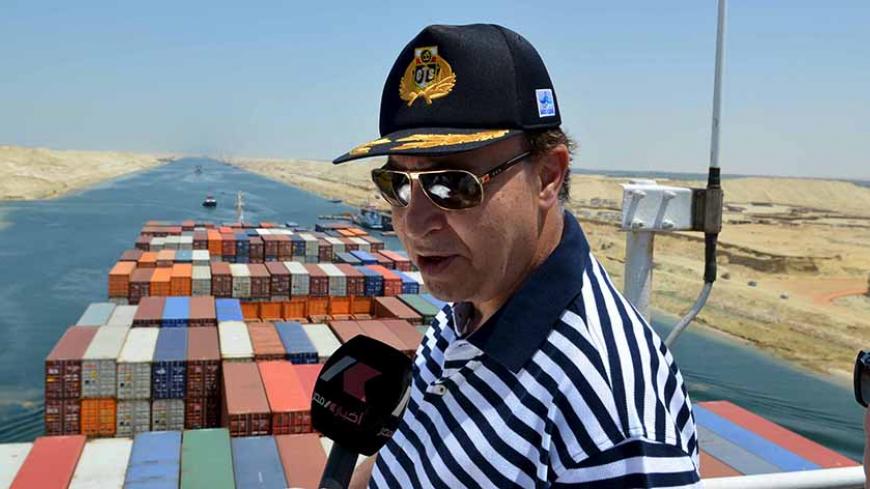 ISMAILIA, Egypt — Five months after the new Suez Canal opened, Egypt is kicking off a grand promotional campaign, starting with “Opportunities and Challenges,” a global navigation conference set for Feb. 22-24 in Cairo.

Realizing that the canal faces competition from other shipping routes, the Suez Canal Authority will begin marketing on an international scale, chairman Mohab Mamish said at a Jan. 17 news conference in Ismailia.

According to Mamish’s statements during the conference, the campaign will include international tours — both in the region and beyond — to attract new shipping lines to the Suez Canal through meeting with representatives of shipping companies. In addition, all agencies involved in the maritime transport industry will be invited to attend and participate in the global conference. Mamish said the goal of the conference will be to discuss new developments in maritime transport and harnessing the Suez Canal’s abilities to take advantage of these developments.

“This is how the new Suez Canal can be marketed in all global shipping forums — ensuring optimal use of the canal and maximizing profits,” Mamish noted. He also said that the marketing campaign will be accompanied by a flexible pricing policy for passage fees, to attract more kinds of shipping lines that do not currently use the canal.

Mamish said he considers the conference a direct and effective means of engaging with customers and major stakeholders in maritime transportation and international trade. Conference participants will be able to exchange views and identify investment opportunities and challenges to maximize the canal’s global trade role.

The new canal stretches 45 miles. The $8 billion project was completed in one year, funded with investment certificates offered by the government to Egyptians.

President Abdel Fattah al-Sisi has said the canal’s earnings have already covered excavation costs. However, the public had been preoccupied since October — just two months after the canal opened Aug. 6 — with its decreasing revenues. These revenues will rise with the projected increase in traffic, but that traffic will fluctuate with world trade trends, Mamish said.

In an exclusive interview Jan. 17 with Al-Monitor in Ismailia, Mamish pointed out that the Suez Canal affects and is affected by the world trade movement and its revenues are calculated and announced every year. He wondered how a 3% decrease in October’s revenues is cause for concern so early in the game. The Suez Canal Authority achieved a 2.7% increase in 2015 compared with 2014, he said, despite several obstacles, most importantly the unfavorable conditions in the maritime transportation field and the drop in oil prices.

“It was a miracle that we managed to operate the [existing canal lane] at full capacity in light of the excavation and dredging works in the new water branch,” Mamish said. He blamed untrustworthy interlopers for raising doubts about the canal’s economic viability.

“Those who are behind and funding this [rumor] campaign are known, and they do not wish Egypt well. But we Egyptians are not beholden to anyone, as we paid for this canal with our own funds, and we did not take a dime from anyone,” he said.

Asked about the difference between the current canal project and the previous proposal raised under deposed President Mohammed Morsi, Mamish stressed that the projects are not related. Morsi’s controversial proposal would have invited foreign investment.

“There is a difference between a state willing to achieve development for the benefit of the country, while preserving the nation’s capabilities and territories, and other [parties] seeking to serve their own interests only, undermining their land to schmooze with other states,” he said. “The new Suez Canal project is designed to preserve Egypt’s rights as a state and the rights of those who invest in Egyptian land. It is not a private project.”

He acknowledged that the canal faces strong international rivalry, particularly from Israel and Jordan’s Red Sea-Dead Sea Canal, should it be completed over environmentalists’ objections, as well as the Panama Canal, the arctic shipping line and the Cape of Good Hope.

“The shipping industry is the pillar of the global economy and we are facing competition from other shipping routes,” he said.

Mamish explained that the Egyptian government and the General Authority for the Suez Canal Economic Zone, which was recently established to handle the numerous development projects in the canal zone, are currently working on legislation to support the projects and maritime transport services.

“There have been flexible ideas in this regard. The legislation will play a major role in making the project a success and in attracting investments; they are expected to include many facilities,” said Mamish.

When asked how the Suez Canal will deal with vessels from countries hostile to Egypt, he said, “We are governed by the canal law, according to which no vessel is prohibited from entering the canal except for vessels shipping drugs, slaves or vessels of a state declaring war with Egypt.”