One year on, are 'new' Suez Canal revenues sinking?

Although the Suez Canal has not generated the expected revenues after expansion, future development plans in the canal zone could yield great economic benefits for the Egyptian economy. 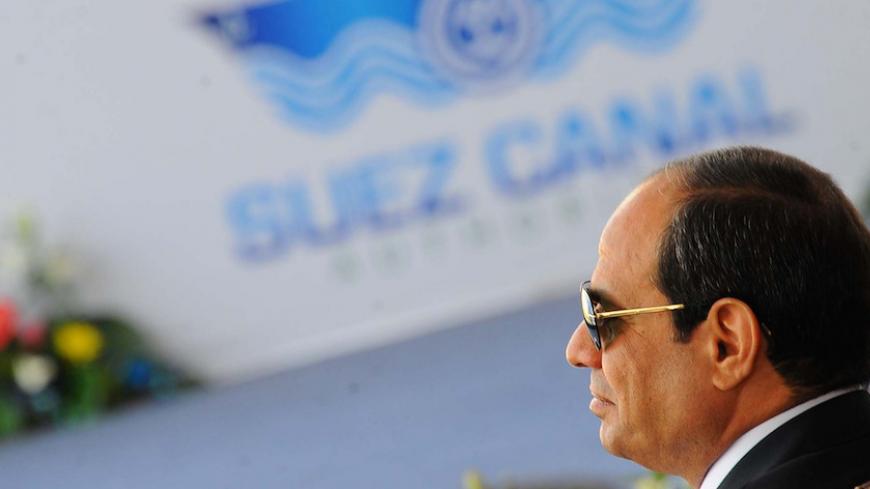 CAIRO — Aug. 6 marked the one-year anniversary of the inauguration of the new Suez Canal. While the expansion project was heavily praised in the Egyptian press, serious questions remain about its value a year on.

The cost of the project, on which construction began in August 2014, has now exceeded $8 billion. The project consists of digging a waterway 35 kilometers (22 miles) long in parallel to part of the original canal, which runs for 190 kilometers (118 miles).

In August 2014, Vice Adm. Mohab Mamish, head of the Suez Canal committee, said in comments to the press that "digging the new Suez Canal will yield increased canal revenues to the tune of 259% by 2023, meaning $13.226 billion, compared with the present revenue of $5.3 billion."

However, one year following the canal's inauguration, the state has yet to declare the extent of these new revenues, except in the first quarter of 2016, when Mamish announced in June that revenues had increased by 592.4 million Egyptian pounds ($66.7 million) as compared to the same period in 2015.

Egyptian Finance Minister Amr El Garhy was quoted in the press as saying on July 31 that "Suez Canal revenues will fluctuate between $5 billion and $5.5 billion this year, despite a net decline in global trade."

If one examines the statements made by the finance minister, it becomes clear that the canal has not succeeded in bringing about any noticeable increase in revenues, as compared with the revenues projected by Mamish in 2014.

Al-Monitor analyzed the data on ships and their cargo provided by the Suez Canal Authority. We compared September 2014-March 2015 — in other words, before the expanded Suez Canal was opened — to the same period the following year, September 2015-March 2016 (after the canal's expansions were completed). The published data only goes up to March 2016.

The total growth in ships transiting the canal after it was expanded amounted to an anemic 0.0033%, and freightage increased by only 0.008%.

Ahmad Sultan, a former adviser on maritime transport to the minister of transportation, commented on these percentages: "The new Suez Canal is a project for the future. Its goal is to increase the canal's absorptive capacity to keep pace with the expected increase in the maritime traffic in the future."

Sultan added, "The project is an investment in basic infrastructure. It is a long-term investment, and it cannot be judged on the basis of one year, especially in the wake of the decline of global trade. That latter is something that was reflected in the canal's revenues as a matter of course."

Abd al-Wahhab Kamil, head of the Egyptian Naval Academy, concurred with Sultan’s view on the effects of the decline in global commerce on Suez Canal revenues. Kamil told Al-Monitor, "The expansion of the Suez Canal will in time offer a passage to ships. The lack of notable growth in revenues was caused by a decline in global commercial transit. It isn't the fault of the canal. The recession will end soon, and revenues will then rise."

Concerning the minute percentage growth in the number of ships and cargo weight passing through the canal before and after its expansion, Kamil said, "It wouldn't be expected for revenues to suddenly jump, because ship transit is tied to the contracts of their respective companies, which determine the shipping lines, and these contracts last for years. Ships will begin to change their routes after these contracts run out, and that will benefit the Suez Canal. I expect a noticeable improvement in the coming year."

Kamil stressed that the Suez Canal's expansion is just one step within the larger project of developing the canal, which he said will have a positive economic return. "We will see [this return] soon, when construction is completed on the service and maintenance centers for boats. And it will be quick profit."

In November 2015, the Egyptian president announced a comprehensive project to develop the Suez Canal zone, embracing the establishment of a large seaport east of Port Said, an industrial zone, a logistical zone for servicing ships, a residential zone and a fourth area for fishing farms, in addition to a network of tunnels running underneath the Suez Canal.

Last February, Egypt initiated one of the projects along these lines, the side channel east of Port Said.

Egyptian economist and writer Wael El Nahas believes that the expansion of the Suez Canal "has saved the canal from a catastrophe that was looming over it."

Nahas told Al-Monitor, "Despite the decline in global commercial traffic, what has been achieved in the last year must be considered an accomplishment. After the collapse in global commodity prices last year, and especially petroleum products, transport shifted to using supertankers. If not for the expansion and deepening of the Canal and opening of a parallel corridor that could absorb ships coming from both north and south simultaneously, the canal would have faced the loss of its current resources at a fundamental level."

Nahas stressed that "the current statistics are not final. There are other projects that we view as coming within the axis of development. For example, the loading and unloading docks will be one of the most important profit[-generating] elements of the Suez Canal, and [it will show] positive results in the next few years."

One year after the canal's expansion was completed, revenues have been disappointing. Especially when compared to the expectations of success that were generated by Egyptian officials. However, the decline in global commercial traffic has had a significant negative impact that cannot be controlled. In that sense, the completion of the development axis project might serve as a fail-safe at the present time. But if it faces major hurdles in light of the economic crisis now gripping the country, the project might be suspended if the necessary funds cannot be found. This is the challenge now confronting the Egyptian government.