How new Egyptian parliament is empowering those with disabilities

In an interview with Al-Monitor, Khalid Hanafi, a visually impaired member of parliament, said that Egypt is still a very young democracy and the presence of people with disabilities in the legislature will help with addressing issues facing this group. 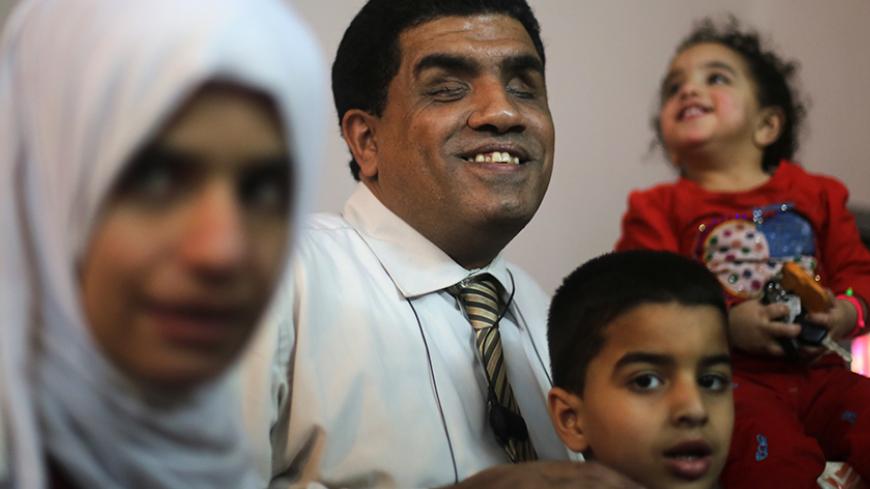 Blind lawyer Khalid Hanafi smiles next to his wife, Sherien Fathy, who is also blind, near their son, Yehia, and daughter, Rahma, at their home in Cairo, March 5, 2014. - REUTERS/Amr Abdallah Dalsh

CAIRO — The unprecedented inclusion of nine people with disabilities in the Egyptian parliament raises questions as to whether it will bring about legal advantages for such persons in Egypt. In an interview with Al-Monitor, Khalid Hanafi, a visually impaired representative and one of the 28 parliamentarians appointed by President Abdel Fattah al-Sisi, said that he was preparing a series of interpellations and briefing requests to submit to the government. These would cover a number of issues, most notably rights for people with disabilities and other social issues.

Al-Monitor:  Do you think that the inclusion of nine people with disabilities in the Egyptian parliament will help them to address the issues facing this group?

Hanafi:  This unprecedented number confirms several important messages — most notably that Egypt is working to honor the rights of marginalized groups, which were not taken into account before. Eight people with disabilities won the elections, after the various parties were compelled to include them on their lists, and I was among the 28 representatives appointed by the president before parliament convened on Jan. 10. This reflects the clear shift in the way political leaders in Egypt view people with disabilities, following the suffering caused by the previous regimes that looked down on them in past years. Perhaps this change has become clear since Sisi took office and surprised us when he attended the 2014 Special Olympics for People with Disabilities. I believe that our presence in parliament supports our chances to win not only the struggle to resolve the issues of people with disabilities, but also to solve the problems of the various social groups, especially marginalized groups.

Al-Monitor:  How do you evaluate the people with disabilities’ dossier? How has their situation been impacted following the January 25 and June 30 revolutions?

Hanafi:  Any legislation provides the general framework and deterring sentence. Under the current law, people with disabilities should represent 5% of the employment rate in any company hiring at least 50 employees. The current penalty for violating this does not exceed 100 Egyptian pounds ($12.78), which is not deterring. This is in addition to the social culture perception that people with disabilities are unproductive and inefficient. I will be striving with my colleagues in parliament to adopt a deterrent penalty if such a law is not enforced. At the same time, people with disabilities should be committed to enhancing their competences and skills in order to keep up with the labor market.

Al-Monitor:  The first day it was convened, parliament was subject to strong criticism, including sarcastic remarks on the social media pages in Egypt. Then, a decision was made to stop live broadcasts of parliament sessions. What is your take on this? Do you think that the dissolution of parliament is possible?

Hanafi:  I hope that parliament will not be dissolved, because it includes categories that were not represented in any of the previous parliaments, and I am a member of one of the categories, namely people with disabilities. There should be a parliament to pass laws that complement the constitution. Unfortunately, some representatives are interested in the media show, neglecting their role as parliamentarians. This is why parliamentary performance has become organized after the sessions’ live broadcast was stopped. At the same time, bias prevailed on social media, which confirms that we are still a very young democracy. I was subjected to a satirical campaign on Facebook. I was having a light meal with a female member of parliament and I was surprised at a photo of mine posted with a lot of sarcasm, although it was an ordinary photograph. Is it possible for a member of parliament to spend 17 hours in parliament without having any sandwich? The parliamentarian did not put anything in my mouth.

Al-Monitor:  A large number of independent members of parliament announced having joined the Support Egypt coalition, which now comprises a majority and serves as political support for Sisi. Are you going to join it? How do you evaluate the current government’s performance? Are you going to vote for it?

Hanafi:  I believe that I have a better chance in parliament as an independent member of parliament. As for the government performance, the performance of some of the ministries is good, while others are doing nothing. I have a plan consisting of some interpellations to reveal the truth before naming the prime minister, and the persons with disabilities have a large and important part of it.

Al-Monitor:  Parliament passed the laws that were issued while it was not convened — totaling 341 laws — in 15 days, as stipulated by the constitution. Yet doesn’t this short period of time indicate that a comprehensive study of those laws was not completed?

Hanafi:  A large number of these laws were part of those laws issued on a yearly basis, and their approval does not take time — for instance, the economic entities final financial statements, which exceed 200 out of the 341 laws that parliament examined. The remaining are the Right to Public Meetings, Processions, and Peaceful Demonstrations; the anti-terrorism law; and the civil servant law, which raised controversy among public opinion.