During Ramadan, an Egyptian series starring 25 actors with disabilities will be aired on social media, amid efforts to shed light on the marginalization and stigma that Egyptians with a disability face. 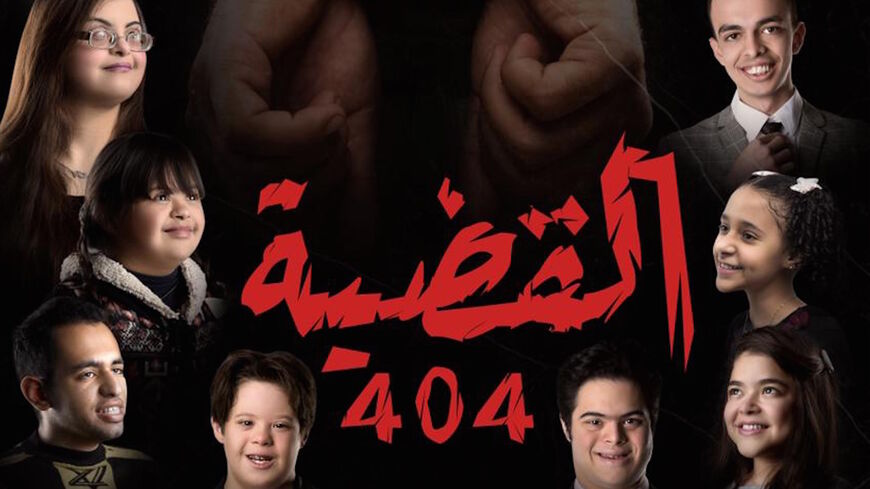 CAIRO — For many Egyptian families having a child with a disability could be a cause of shame and disappointment. Film director Mohamed el-Ansary and scriptwriter Ramez Abbas decided to make a TV series to show a different view.

For the first time in Egypt and the Arab world, an Egyptian self-funded TV series starring 25 actors with disabilities and many with Down syndrome will be released on social media during the Muslim holy month of Ramadan.

The show — titled “El-Qadiya 404” ("Case 404") — was written and directed by Ansary with a script by Abbas, a person with a disability himself.

What began as an initiative for the inclusion of persons with disabilities ended up as a full-fledged work of art.

“About 18 months ago, [me] and my friend Ramez [Abbas], who is deaf but can read lips and speak, initiated ‘Alam Mowazi’ [‘Parallel World’] for the inclusion of persons with disabilities in the media and arts. Throughout our work with them, I have come to realize their talents and unlimited potential,” Ansary told Al-Monitor.

The initiative included workshops and artistic activities carried out by Ansary, Abbas, psychologists and other volunteers. The dedicated team eventually released a song on YouTube titled “Alam Mowazi,” the first in the region involving actors and singers with different types of disabilities and directed by Ansary.

"El-Qadiya 404" was inspired by an idea, or rather a simple event.

“One day Ramez told me he kept knocking on the doors of directors and producers to be heard and recognized as a writer, but in vain. He then showed me a big box full of really well-written works that he wrote over the years,” Ansary recalled. “I told him why not make a TV series that depicts his dilemma and those of many others with disabilities?"

Ansary and Abbas had no clue how and when to start. And since it was difficult to find a producer who would risk money to produce such a show, Ansary decided to support the cause and invested all the money he had, funding it himself.

The show presents 12 themes over the 10 episodes of season one, mostly derived from real life events and problems persons with disabilities every so often undergo, including sexual abuse, bullying, exploitation, stigma and discrimination.

“The series is based on the challenges they survive every day in an attempt to lead a normal life in a society unfair to them,” Ansary noted.

He added, “There is a social stigma attached to them. People — especially those who are  uneducated — feel afraid to deal with a person with a disability. That’s why you rarely see them [disabled people] on the streets. They hide at home or their own families hide them."

Heba Hagras, an international disability consultant and advocate for the rights of persons with disabilities, is positive about "El-Qadiya 404."

“It is really good to address these topics and present them to the viewers for discussion in order to attempt to solve the social perception of persons with disabilities,” she told Al-Monitor.

Preparation, casting and script writing took the crew about a year to finalize, while the show was shot in about 90 days.

The choice of the series’ title is not random.

“'Case 404' metaphorically refers to the state of miscommunication that we — as persons with disabilities — have with other people. When you try to access a website and the process fails, ‘error 404’ appears on the computer screen,” Abbas explained.

“When we find no attention or solutions to our problems, our life malfunctions just like receiving error 404,” he added.

Handling actors with mental disabilities could defy the knack of any director. But for Ansary it was rather “a source of inspiration” as he discovered unlimited “creative capabilities” in them.

“It can’t be easily explained. But while guiding the actors, I depended on feelings rather than words. And we eventually managed to communicate and get the job done,” Ansary said. “Persons with disabilities have creative talents that often can’t be found in those without disabilities. It’s all about how to make the most of them."

Heba Atef, one of the series' leading actresses who has Down syndrome, has long dreamt of appearing on the silver screen, even though she took part in theatrical performances before.

“In college I studied … media. I also had [attended] acting workshops. … So Egypt’s [superstar actresses], beware, for Heba Atef is appearing this Ramadan in 'El-Qadiya 404,'” she said, smiling confidently, during a live interview broadcast April 7 on Al-Kahera Wal Nas private satellite TV channel.

“Many people don’t respect that we are different, often questioning our abilities. In my case, I couldn’t obtain a university education. Neither could I find the opportunity to realize my dream and become a writer, only because I’m deaf, even though I can read, write and express myself clearly,” Abbas told Al-Monitor via a WhatsApp voice message.

In Egypt, about 12 million people out of a population of 104 million have a disability. They are often marginalized, receiving limited legal protection, proper health care, education, access to public services and equal employment opportunities.

It was not until February 2018 when Egypt passed the “Law on the Rights of Persons with Disabilities.” The long-awaited legislation replaced the 1975 law on rehabilitation and employment that allowed only 5% of jobs for persons with disabilities.

“There should be social maturity. …  A work like 'El-Qadiya 404' could not have been made unless some developments had already taken place as to the status of persons with disabilities in the country,” Hagras said.

Abbas agrees with Hagras, concluding, “We have encountered many difficulties for a long time, hindering us from leading an ordinary life. But when the media shows our situation, people may begin to realize our ordeal."