Can Egypt’s tourism industry get back on track after Sinai crash?

In an interview with Al-Monitor, Egypt's Tourism Minister Hisham Zazou expresses optimism that this vital sector of the country’s economy will recover. 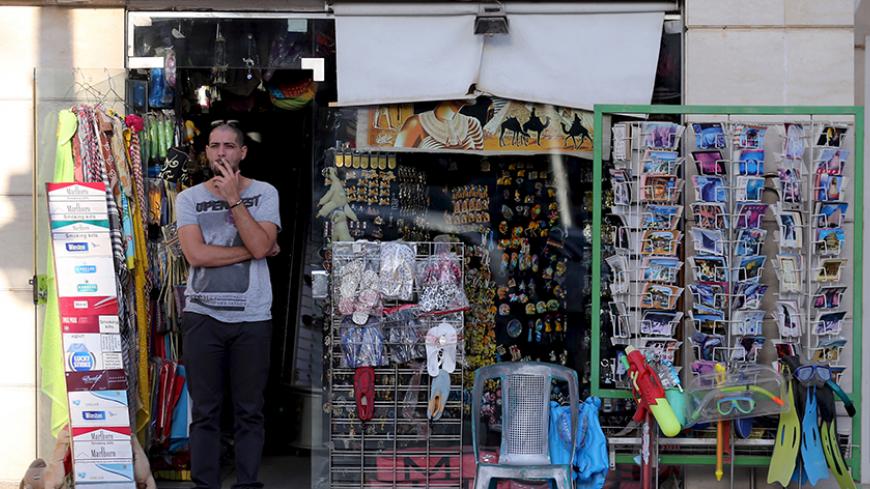 A shopkeeper waits for tourists at a souvenir shop in the Red Sea resort of Hurghada, Egypt, Jan. 9, 2016. - REUTERS/Mohamed Abd El Ghany

CAIRO — In an interview with Al-Monitor Dec. 22 , Egypt's Tourism Minister Hisham Zazou said the “This Is Egypt" campaign, launched in early December to boost tourism to Egypt, will not include Russia and Britain at this stage. He confirmed that Cairo hired global consultancy firm Control Risks, which specializes in assessing risk at airports, to obtain an international certificate accredited by a neutral party to attest to Egyptian airports’ compliance with international safety standards. Zazou said this step was not taken as a result of weakness in the safety and security system at Egypt’s airports, which he described as very good.

Since the Oct. 31 crash of the Russian Airbus A321 in the Sinai Peninsula that killed 224 people, Cairo has faced a crisis in the tourism sector. Tourism is an important source of foreign currency revenue for Egypt and provides thousands of jobs. The crisis was exacerbated when a number of countries, including Britain, suspended flights to Egypt and Russia amid doubts that Egypt’s airport security was sufficient and concern over international reports favoring the theory that the crash was caused by a bomb smuggled aboard the plane by the Islamic State.

Al-Monitor:  What is the size of the losses incurred by Egypt’s tourism industry in the wake of Britain and Russia’s suspension of flights to Egypt in the aftermath of the Russian airplane crash in Sinai?

Zazou:  Egypt has incurred monthly losses of 2.2 billion Egyptian pounds [$281 million] since the crisis began. Russian and British visitors represent 70% of the total flow of tourists to Egypt. This is why we are keen on clarifying several security-related fallacies about Egyptian airports, blown out of proportion by the Western media. This contributed to the decline in Egypt’s hotel occupancy rates and caused the tourism industry to incur these losses.

Al-Monitor:  Cairo launched several promotional campaigns to revive tourism, most notably the “This Is Egypt” campaign. What is the strategy underpinning these campaigns, and do they go hand in hand with the measures to ensure safety of travelers at airports?

Zazou:  I will start with the second part of the question, because this is the root of the crisis. Several fallacies and lies were spread about poor security measures in our airports. We are confident that we have a very good traveler and visitor safety system at our airports, but we want to send out a message of reassurance to the world and to Egyptian citizens. This is why we resorted to the services of Control Risks, which specializes in the field of safety risks and consulting services. This company will review and assess the security situation at the airports in Cairo and Sharm el-Sheikh as a first stage, and will issue its report within two to three months. We hired this company to obtain a certificate by a neutral international party that enjoys credibility and asserts the reliability of our safety system. We will not abandon our current security system at airports, but we will apply the recommendations that will be issued by the company to modernize the management of our system, and to allow our airports to keep pace with the highest international standards.

We concentrated all of our efforts to develop the campaign called “This Is Egypt,” which uses all methods of tourism promotion and marketing to boost Egypt’s foreign and domestic tourism. We developed several attractive packages for tourists and special tours for beaches, resorts and archaeological sites. This $68 million campaign is expected to continue until 2018. We will be using traditional and modern advertising tools along with a peer-to-peer advocacy approach by encouraging Egyptians to share their favorite photos of Egypt on social media. We are currently promoting domestic tourism through subsidized packages allowing all Egyptian social classes to visit all touristic sites. … The campaign targets 27 tourism markets in the world, but in light of the recent crisis, the campaign will not be covering Russia and Britain at this stage; they will eventually be covered at a subsequent stage. I recently returned from Saudi Arabia after the launch of the campaign there. We count on having a promising Arab tourist season during the current period. I will soon be touring several European countries, including Spain and Germany.

Al-Monitor:  In some of your statements you accuse the United States and Britain of orchestrating the Egyptian tourism crisis by allegedly spreading harmful rumors about the Russian plane crash. How do you think Russia, one of Egypt’s international allies, is handling this crisis?

Zazou:  I talked about campaigns in the Western media aimed at plotting against Egypt and anticipating the results of the investigations. The Arab Republic of Egypt respects all of the decisions of other governments that collaborate with it. There is a current positive inclination at the level of Egyptian-Russian negotiations to end the travel ban to Egypt imposed on Russian tourists. We are hosting Russian committees tasked with assessing the airports' security systems. We will spare no efforts in this respect. Egypt was in a transitional phase and there are many countries that experienced stages of transition, including Russia itself, but I believe we managed to pass through this phase within a relatively short period. We are now reviving all of the sectors of our country, including tourism.

Al-Monitor:  Does Egypt benefit from the decision to halt Russian tourism flights to Turkey? What is your plan to bring back Russian tourists to Sharm el-Sheikh?

Zazou:  We never discussed the possibility of benefiting at the expense of others, but the mere lifting of the travel ban to Egypt will improve the influx of tourists. Egypt has the basic components of an excellent destination. In light of the ongoing negotiations, I assure you that the Russian ban will be lifted and Russian tourists will very soon be flocking to Egypt, but I do not have a specific date yet.

Zazou:  Who said that domestic tourism in Egypt is stagnant? On the contrary, during the past five years the majority of hotels and tourist attractions were occupied by Egyptians. Domestic tourism represents 18-20% of the tourism sector in Egypt, and the next plan of action pursued by the ministry and Egypt Tourist Authority is counting on domestic and Arab tourists to be the alternative to make up for the current crisis experienced by the foreign tourism market.

Al-Monitor:  What do you think of the term "halal tourism" that is based on resorts having separate facilities for women and men, and is favored by families from the Gulf states?

Zazou:  Describing a given category of tourism as halal implies that the other categories are not. I refuse to use the term. However, we offer a product that fits the demands of a particular market of tourists. The private sector is required to offer this product to meet such demands and to maintain a good international competition level.